A further part of the superb collection of foreign postcards formed by the late Karl Jaeger comes up for sale in the Warwick and Warwick auction on January 20th. The cards featured below provide examples of some of the interesting cards he collected. 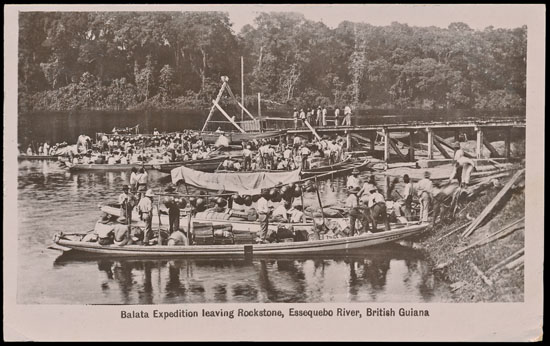 Postcards of British Guiana (now called Guyana) are scarce and those that are seen are usually views of the capital, Georgetown. This is a very busy river bank scene at Rockstone, a village on the Essequebo River, about 100 km from the capital. River transport would have been the main means of communication in 1909, when this postcard was posted. Balata is a hard rubber-like material made by drying the latex produced principally by the bully tree of the West Indies. It is used in the manufacture of golf balls and machine belting. 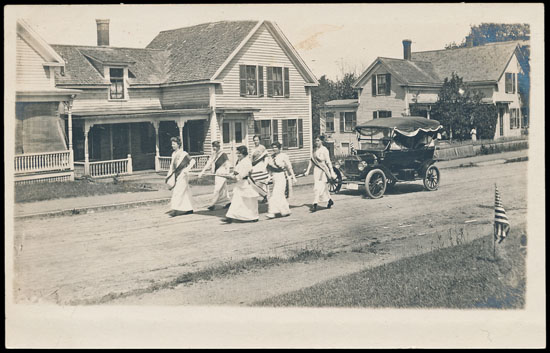 This is one of the most tantalising cards in the Jaeger U.S.A. collection. It depicts a group of 6 ladies marching, holding what looks like the Stars and Stripes flag. They are all wearing sashes of more than one colour. Could they be suffragists and could the sashes be green, white and purple, the colours of the movement? Behind the 6 marchers is a motor car of the 1900 – 1910 period, driven by a man, but with a lady in the near side rear seat. The car is decorated with a ribbon and a flag. Unfortunately the card has no caption and the location is not recorded. A further Stars and Stripes has been planted in the nearside grass verge. 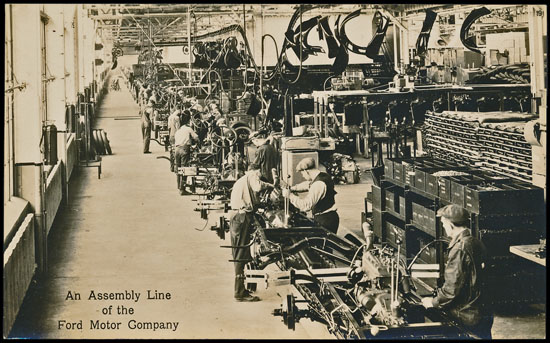 This real photographic card of the assembly line of the Ford Motor Company’s River Rouge Plant at Dearborn, Michigan, was published by The Garraway Company of Rutherford, New Jersey. Construction of the plant started in 1917 and by 1928 it had expanded to be the largest integrated factory in the world. Initially boats were built but motor car construction started in 1927 and this card probably dates from the late 1920s or early 1930s judging from the assembled chassis and the narrow width of the wheels. Production of motor vehicles continued at the Rouge works until 2004. 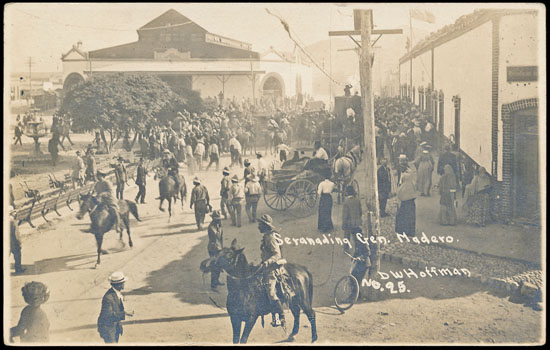 This well-animated real photographic card depicts a Mexican street scene, with activity in the distance. The caption “Seranading (sic) Gen. Madero” refers to the Mexican revolutionary leader Francisco Madero who was the leader of the 1910 Mexican Revolution. President Diaz was forced to resign in 1911 and Gen. Madero was elected Mexico’s 33rd president. He was assassinated in 1913, which neatly dates the card to the period 1910-13. 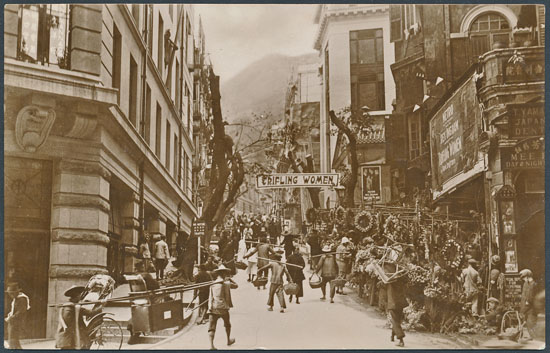 Real photographic cards of Hong Kong are fairly scarce and very popular. This card was published by the Universal Postcard & Picture Company of Shanghai and depicts an attractively animated scene, busy with native porters. There is a sedan chair in the foreground. On the right is the Metro cinema, which is showing Rex Ingram in “Trifling Women”. On the extreme right, next to the cinema entrance there appears to be a shop selling picture postcards. A sign reads “Special Dept. for developing photos, amateurs’ works. Finest selection of local views.” A top quality topo card of a well-collected area! 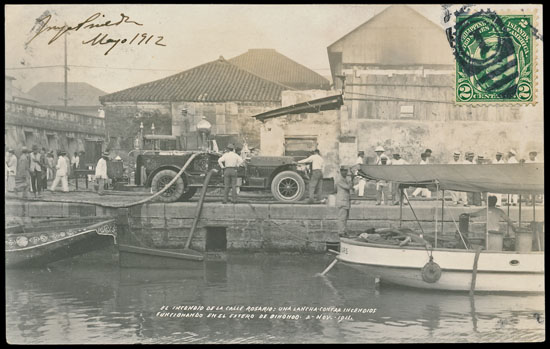 Postally used in 1912, this real photographic card shows the port area of Binondo, in the city of Manila. It is the world’s oldest Chinatown, having been established in 1594. Of particular interest is the vehicle on the quayside. It is a fire tender with initials on the bonnet “MFD” (Manila Fire Department). It is pumping water from the harbour to fire hoses, though the site of the fire is not apparent and the relaxed attitude of the crew and the observers suggests that it is a damping down exercise at the end of the main conflagration. The fire tender has chains on the rear wheels to aid traction and the sides of the vehicle are handsomely painted with scroll work. 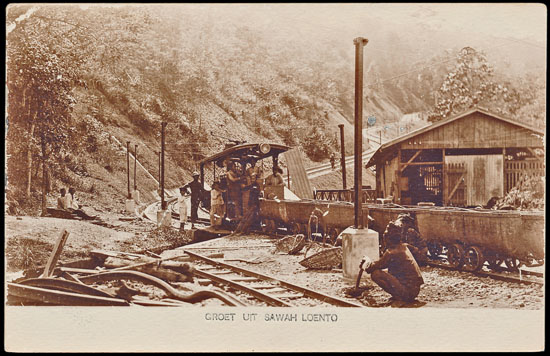 Sawahlunto is a town on the island of Sumatra, 95 km from Padang. The colonial power, the Netherlands, established a coal mine here in the 1880s and built a rail connection to Padang in 1894. The coal mines in the area were prosperous, but they were operated by local forced labour until1898. These two real photographic cards are un-dated , but typographically they probably belong to the first two decades of the 20th century. The publisher is anonymous. 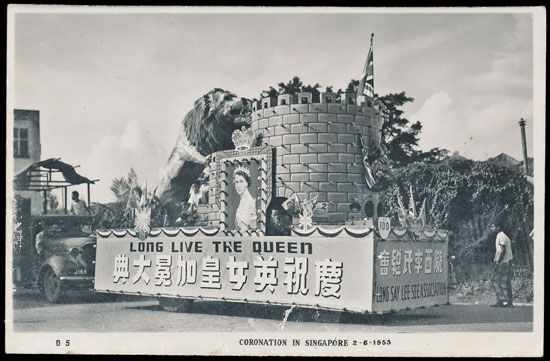 The 1953 coronation of Queen Elizabeth II was celebrated in the British Commonwealth countries as well as in Great Britain, though the number of local cards published was minimal in most countries. Singapore staged a street procession and this photographic card, with a plain back, was one from a series published locally, depicting the celebrations. The float shows a lion and a British castle. 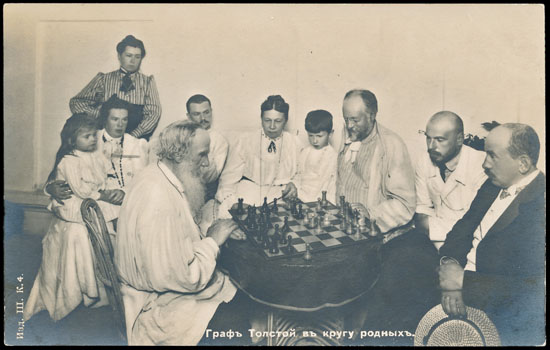 Not all of Karl Jaeger’s collections were topographical and this card from his Russian collection depicts the Russian author, Leo Tolstoy, playing chess with his doctor. In his later life Tolstoy renounced his wealth and noble birth and expressed his belief in non-violent resistance. He was a source of inspiration to Gandhi and Martin Luther King. He died in 1910 at the age of 82.