A rare and unusual Mary Queen of Scots 1553 gold forty-four shillings coin is to be offered in our 9th December 2015 specialist coin auction. 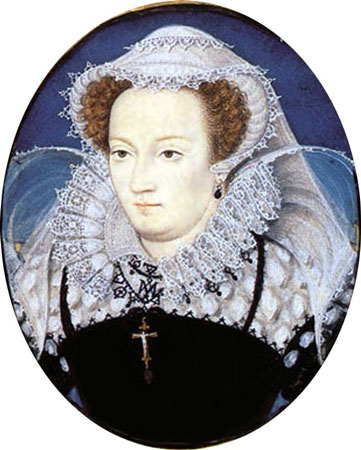 Mary, Queen of Scots, also known as Mary Stuart or Mary I of Scotland was born on 8th December 1542. She was the only legitimate surviving child of James V of Scotland and Mary of Guise. She became Queen of Scotland at only six days old after the death of her father. She spent much of her childhood in France. Scotland in the interim was being governed by a series of regents. She married the French Dauphin, Francis in 1558. She briefly became Queen consort of France from 10th July 1559 until 5th December 1560 when King Francis II died of an ear infection.

Mary, now a widow, returned home to Scotland and after a disastrous marriage to Lord Darnley which ended in his murder, and the birth of the future James VI, she married James Hepburn the 4th Earl of Bothwell. Bothwell was disliked by most of the Royal Court and in 1567 Mary was forced to abdicate in favour of her one year old son.

After an unsuccessful attempt to retake her throne, Mary fled to England initially to seek the protection of her cousin Queen Elizabeth I. Mary was seen by many as the rightful heir to the English throne and Elizabeth had Mary arrested and imprisoned in various castles and manor houses for a period of eighteen and a half years. Eventually Mary was found guilty of plotting to assassinate Elizabeth and was executed on 8 February 1587 at Fotheringhay Castle in Northamptonshire.

Lot 800 is an 1553 forty-four shillings gold coin. It shows IG on the obverse and cinquefoils on the reverse. It is graded as good very fine and is gilded and from a mount. It is estimated at £1,500. 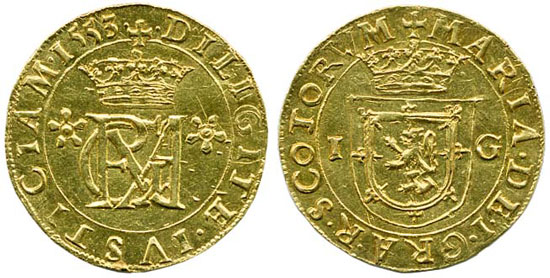