An extremely rare Alfred the Great penny is to be offered in our 19th February 2020 Coin Auction. 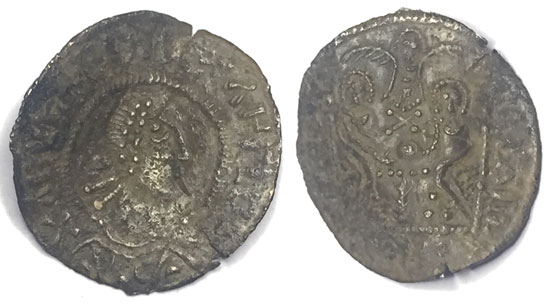 Alfred the Great was a king of Wessex from 871 to 899AD. Often known by schoolboys as the king who burnt the cakes, he also was a successful military strategist and resourceful fighter, largely defending his kingdom from the Danish invasions. He was also a pragmatist however and realising that he could not defend the entire country from the Danes successfully negotiated peace with them with the treaty of Wedmore.

He also implemented reforms of the education system, commissioning translations of key texts from Latin into Anglo Saxon ‘for the benefit of peace’.

Alfred died in 899 at the age of 50, and was buried in Winchester, the burial place of the West Saxon royal family.

He is the only English king to be known as ‘The Great’.

Lot 389 in our 19th February 2020 auction is a portrait type penny, showing on the obverse the kings bust with bonnet. On the reverse two emperors are shown seated with victory above them. The coin is graded good very fine, though it is buckled. The coin was struck by moneyer Beagstan and weighs 1.15g. It was found by a metal detectorist at Shudy Camps in Cambridgeshire on 29 Sept 2019 and has been recorded at the Fitzwilliam Museum under EMC number 2019.0279. The lot includes a copy of the EMC record and an original letter signed by the landowner of where the coin was found, confirming the find.

The full 19th February 2020 auction catalogue is available to view on our website, which also has details on how you can place bids. Our Twitter and Facebook accounts also include updates of all our latest auction news.