What are hammered coins worth?

How much are hammered coins worth?

Most rare hammered coins are unearthed by metal detectorists or discovered by dedicated numismatic collectors.

Often easier to identify than they are to find, a hammered coins value is open to interpretation.

In this detailed guide, we’ll take a look at:

Please remember the information contained in this article is for guidance only. If you need a FREE and accurate hammered coin valuation, please get in touch or seek independent professional advice.

What are hammered coins?

The term ‘hammered coin’ is a direct reference to the original manufacturing process.

Hammered coins were made by placing a blank piece of metal, gold or silver (known as a planchet or flan) between two dies in order to strike the required pattern into both sides.

The anvil or bottom die was usually sunk into a sturdy surface like a log so the upper die could be struck with a hammer to produce the required image. As a result, it was impossible to produce coins that were of a uniform size and weight.

This manufacturing method was largely unaltered for centuries, with hammered coins produced from around 600AD until 1662.

Archaeological evidence suggests that ancient coin producers could make up to 47,000 coins from one individual die.

UK hammered coinage represents a diverse and rich period in our history – stretching more than a thousand years from the Celtics through to the Stuarts.

No matter what era you prefer, there are thousands of British hammered coins to keep you interested – including:

Minted between 100BC and 100AD, there are dozens of Celtic coin examples found from the Iron Age through to the Medieval Age. They are heavily influenced by Greek motifs and usually made from silver or gold.

During the early Anglo-Saxon period, gold was the preferred metal of choice for hammered coins. At the end of the 7th century, silver coins known as ‘Sceattas’ were produced with dozens of different types minted between 600 and 1066. Around the same time, the first British penny was introduced.

With up to 70 mints actively manufacturing, the early coins depicting William I and William II were well produced and changed in appearance every three years. Hammered coins used during the Civil War (between 1135 and 1153) and the reign of Stephen are extremely rare.

In a period when some of history’s most famous monarchs reigned, there were many different denominations and designs for hammered coins.

The majority from this time are from the reigns of King Henry VIII and Queen Elizabeth I, including the very popular silver Groats and half-groat coins.

In the earlier Stuart period, before the English Civil War, coins continued to be hand produced. But this stopped in 1662 when milled coins formed the modern blueprint for money – arguably the biggest change in the history of British coinage.

How much did UK hammered coinage weigh?

British hammered coins were first produced in 600AD and stayed in production until 1662 when the milling process dramatically improved quality and security levels.

Most coin denominations looked the same, and usually featured a profile of the ruling monarch, a coat of arms, a rose and a cross.

The general weights for the different UK hammered coins were:

Hammered coins were produced by many different mints around the UK.

During early medieval times, the moneyer's name was included on a coin (rather than a mintmark) as a way of making them accountable for their production quality.

Under the reign of Edward III, coin manufacturing became more regulated and the use of mintmarks began, which were subtle to spot and identified the town or city of origin. The mintmark practise is still in use to this day.

For hammered coinage collectors, it is extremely useful because it helps to establish who struck a coin, where and when.

If you find a rare hammered coin and know very little about it, the mintmark is a good place to start as it can be used to identify the coin’s origin - even if its date is not known. 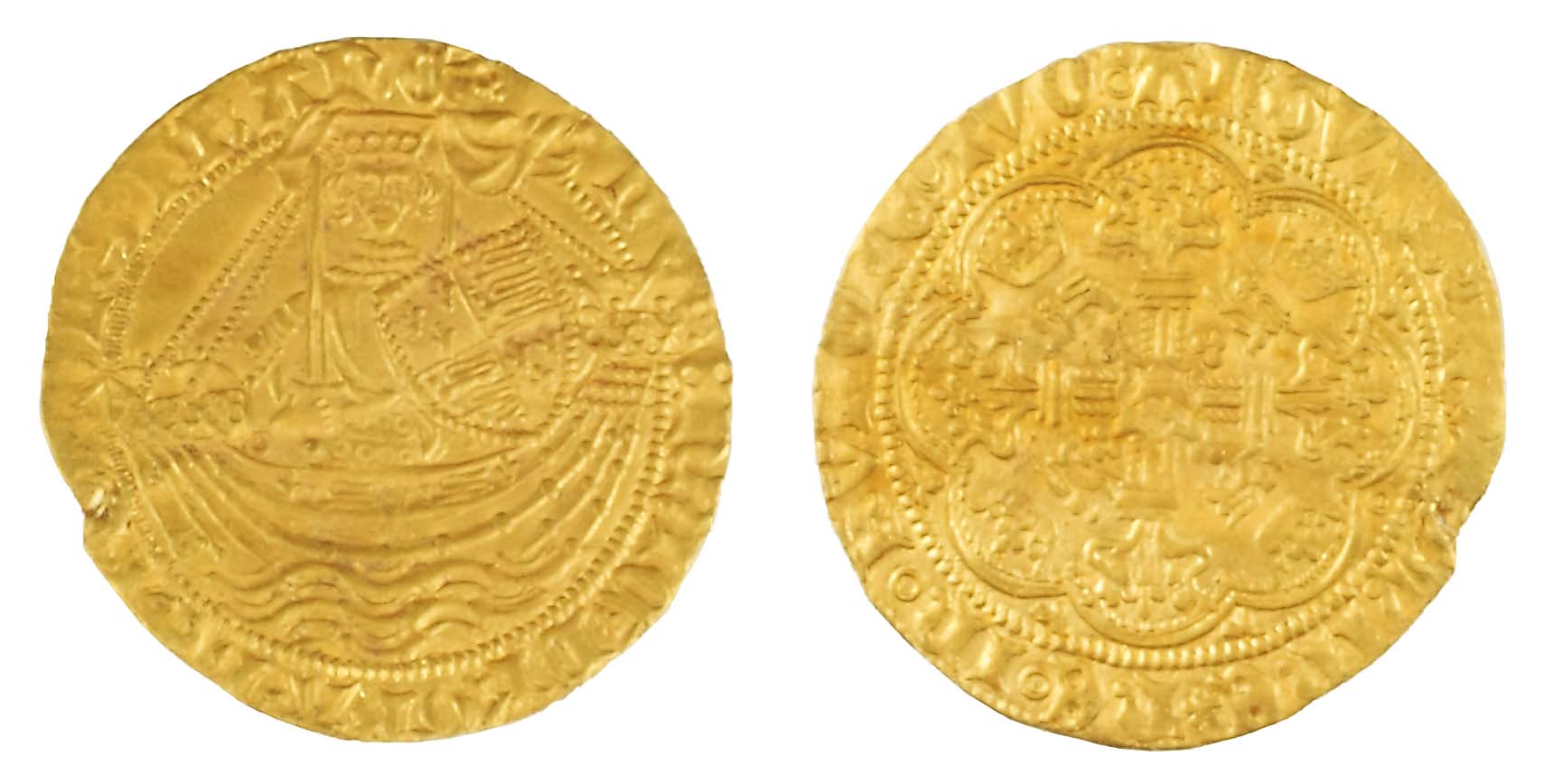 Coin grading in general is a highly-subjective area. There’s no scientific scale on which to base a decision and opinions vary greatly.

However, the following ‘tiers’ can be used to determine a coin’s ‘condition’ and the influence that this will have on its overall value.

Uncirculated (UNC): This grading category does not exist as the majority of hammered coins are found by metal detectorists or archaeologists.

Extremely fine (EF): Whilst extremely rare, hammered coins have been known to exist in EF condition – and always carry a premium price. They usually feature strong, sharp and clear details with only slight signs of circulation or toning.

Very fine (VF): Still quite rare, but more common than EF examples, they usually have slight circulation signs and some toning or marks. All detailing is still visible and clear on both sides.

Fine (F): Most of the UK hammered coinage found today falls into this grade. They have significantly worn surfaces and some smooth areas, but most detail is still clear and visible.

Poor or Fair: The coin’s outline is still visible, but most detail is unclear because the surface is worn and smooth.

Whether you’re buying or selling hammered coins, getting the grading wrong by just one level could be the difference between a few pounds and a few hundred pounds.

At Warwick & Warwick, we would always advise seeking independent and professional advice before making any decisions.

If you’ve inherited or acquired a rare coin and want to know its potential worth, get in touch with our experts – they’ll be happy to provide a FREE and accurate hammered coin valuation.

As with most collectables, a hammered coins value is directly influenced by four specific factors:

Knowing the origin of hammered coinage is vital as fakes and replicas exist.

Scratches, stains and inscription damage – or a poorly cleaned coin – can lower value.

The more it has, the less value a hammered coin (usually) holds.

Whilst this is subjective, pleasing pieces tend to command a premium with collectors.

Should you wish to know the exact value of a hammered coin, please get in touch with our valuation experts – they’ll be happy to provide FREE advice or assistance.

How much are hammered coins worth today?

Ultimately, like all collectables, hammered coinage is only worth what someone’s willing to pay. It may be a cliché, but it’s true.

If an item gains interest from two passionate collectors, the price could increase significantly – especially when sold via auction.

Hammered coins of a larger denomination tend to command better prices and more interest, especially Crowns and half crowns.

For Shillings and coins with a less value, the market price is massively driven by condition – NOT date.

The better condition it’s in, the more it’s worth. Gold coins usually attract bigger bids than silver ones.

If it’s rare, it’s often worth more (as a rule of thumb) because collectors are keen to acquire items where very few examples were produced.

The much sought-after Edward VIII Crown 1936-7 was never issued and because of its rarity can easily fetch in the region of £100,000.

Although selling at auction is an excellent way to achieve a good price, we fully understand that this type of sale is not for everyone.

To remove the uncertainties of the auction room, Warwick & Warwick offer a service known as a ‘Private Treaty Sale’ – where we buy your item outright for an offer based on a fair and accurate current market valuation.

More conservative collectors often prefer this method because they know exactly how much they’ll receive – and they don’t incur any commission charges or seller’s fees.

Generally, you’ll receive a price which is closer to the coin’s ‘retail’ value compared to selling direct to a coin dealer.

Most numismatists and metal detectorists are very knowledgeable about hammered coins and tend to know if they have unearthed something of value.

However, we would always advise you to seek independent and professional advice before selling hammered coins – no matter where you found it or what metal it’s made from.

At Warwick & Warwick, we hold six specialist coin auctions throughout the year and specialise in providing accurate coin valuations – with no obligation to sell.

To take advantage of this FREE service, please get in touch – our valuation experts will be happy to offer advice and assistance.