How much are my medals worth?

Collecting military medals will always have an enduring appeal because it is such a great way to discover about history and the important roles people have played.

Offering a unique insight into past events of major significance, medals are a lasting tribute to the sacrifices made by soldiers who have fought in conflicts all across the world.

Unlike coins, which enter circulation in large numbers, medals do not circulate and are generally unique to an individual. When different versions of the same medal exist, the ribbons, bars or clasps accompanying them are of great importance because they can help to identify the exact recipient.

Whether you choose to collect medals based on their type, historical significance, issuing country, a specific campaign, or regiment or service, their value will depend on their scarcity and a multitude of other factors.

Medals from regiments like the Royal Engineers and the Royal Artillery are not difficult to find, so they are, as a rule, worth less than those given to elite British forces such as the Parachute Regiment, the Royal Marines, the SAS and SBS.

But, as this guide will reveal, the ‘market value’ of a medal is normally dependent on the detailed background of the award.

The four ‘values’ of a medal

In our role as military medal specialists, we are often asked ‘How much are my medals worth?’

For that reason alone, discussing the four main values of a medal appears to be a logical place to start.

Bullion value: Put simply, this is the value of the metal with which the medal has been made. The price of precious metals like silver, gold and platinum is always measured in dollars per ounce and can vary on a daily basis.

To learn the bullion value of your metal, take a look at the exact fineness that is often marked on the medal:

Once you have this figure, weigh the medal and multiply its weight in grams by the metal’s fineness. Multiply that number by the daily metal price and the answer is the bullion value, once it’s been melted for reuse.

Always remember that in most cases a medal will usually be worth much more than its bullion value. For example, a George Cross was sold for £93,000 in 2012, but the silver in it is only worth about £10.

Sentimental value: Few people who inherit a medal will not sense its sentimental value and, to many, this can be priceless. No amount of money could convince them to part with it.

Collector value: The ‘secondary market’ concerns the trade of medals which did not belong to a direct friend or family member. Often 50 years of age or older, these medals tend to change hands for the ‘current market value’ that a collector is prepared to pay to add a specimen to their collection.

Insurance value: Based on the replacement costs involved in acquiring a similar medal, this is the highest of all the values. It takes into account all of the additional costs incurred and the time it may take to locate a suitable specimen, possibly from a collector.

During the Victorian period from 1837 to 1901, military heroism was greatly admired and the issuing of medals was an iconic symbol of this culture.

Military medals can be divided into two categories:

Militaria collectors are always looking to acquire Orders, Decorations and Medals that have been awarded to both British and foreign troops.

Medals issued by the military for gallantry usually fall into four tiers, depending on the reason for the award. 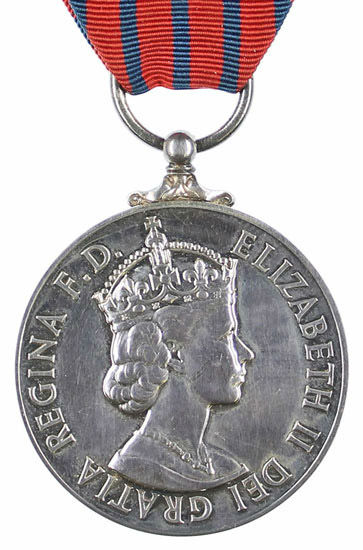 Awarded for Gallantry: A great example of a George Cross medal.

The four tiers of gallantry awards are:

*These medals are no longer issued, other than the Distinguished Service Order – which is now given for leadership and not gallantry.

Military medals were commonly issued in the following periods:

Pre-World War I medals: Issued mainly to British & Commonwealth servicemen and women during the Victorian and ‘Age of the Empire’ era.

World War I medals: For service between 1914 and 1920 to British & Commonwealth servicemen and women, these can also include 'Victory Medals' for personnel from Allied Forces that were issued at the conclusion of the conflict to all the different countries which participated.

World War II medals: For service by British & Commonwealth personnel between 1939 and 1945.

Orders, Decorations & other medals: Anything issued to British & Commonwealth personnel since the start of Queen Victoria’s reign, including medals for gallantry, long service, good conduct, life-saving or to commemorate a royal coronation or jubilee.

What are the main factors which affect a medal’s value?

There are so many factors to weigh up when valuing a medal, many of which are intangible.

When appraising a medal, take a look to see if its highpoints have any wear and feel the edges to see if it is free from nicks.

Other important things to consider are:

Obviously, condition has a direct impact on value.

A medal which has lots of wear, has edge knocks, is fire damaged, lacks its original ribbons or has other blemishes is worth less than one that is in an overall ‘good’ condition with its original clasps or ribbons.

Occasionally a medal is re-named by someone, either to replace a medal previously lost, or in order to enhance its value by naming it to a soldier who took part in a well-collected campaign. The original name is ground away and a replacement name is engraved on the rim. Often it is difficult to detect re-naming and if it is suspected, you need to show the medal to one of the experts at Warwick and Warwick.

Collectors within the medal fraternity have a standard grading with regards to condition and the following classifications can help to ascertain how much a medal is worth.

Very Fine (V.F): Showing clear wear on high relief of medal but otherwise displays little wear. Some medals can be described as Near Very Fine (N.V.F).

Mint (M): As close as possible to the condition in which it was issued by the mint.

Whilst condition plays an important role when valuing a medal, of greater significance is the background story which led to the award. Passionate collectors are driven by this historical interest and a good story will always add more value to a medal.

For this reason, the presence of original documentation or associated ephemera adds a significant amount to the value of a medal because it helps to prove provenance.

For foreign and British awards which are not inscribed, such as campaign medals issued from 1939 to 1945, the survival of this supporting documentation carries even more importance. The recipient’s rank, his/her particular participation in the action and whether he/she was a casualty all affect the value of an award. 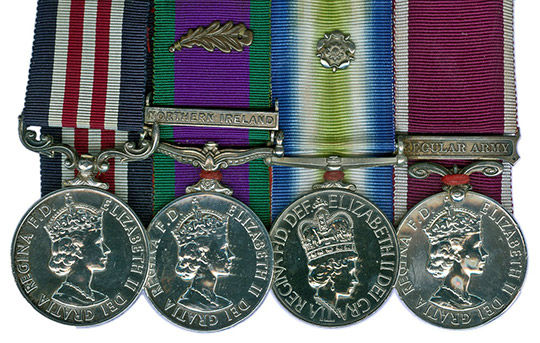 The first campaign medal to be issued dates back to 1650 when some of those who served under Oliver Cromwell in the Battle of Dunbar were recognised for their bravery.

Since 1815, when the Waterloo Medal was issued, campaign medals have been awarded to everyone who meets the varying qualifying criteria for a particular campaign.

Prices vary massively for campaign medals, but a British War medal, issued to any British Empire combatant, can be acquired for as little as £10.

Nowadays, Second World War stars can fetch as little as £5 to £10 because these medals are not named and it is difficult to link them to the recipient.

The Victoria Cross is the ‘holy grail’ for medal collectors because there are only 1,357 in existence. Bearing the inscription ‘For valour’ and known as a VC, this medal was first awarded for ‘conspicuous bravery’ in 1856 and later backdated to the Crimean war of 1854.

In the Great War of 1914 to 1918, a VC could be awarded for rescuing a wounded colleague from No Man’s Land but far fewer were issued in the Second World War so they often command higher prices. Those issued for the Zulu War (23) are even scarcer than VCs from earlier campaigns such as the Indian Mutiny (182).

As the highest award achievable by all military personnel, prices range from £80,000 to £1.5m – depending on the story and provenance attached to them.

Almost every VC example from the First World War routinely surpasses £100,000 and the 11 VCs awarded at the Battle of Rorke's Drift command higher prices because of the conflict’s subsequent fame.

Nowadays, warfare is much more reliant on technology with much less combat at close quarters. There are far fewer opportunities for VCs to be awarded, meaning these medals are scarce and potentially of great value. 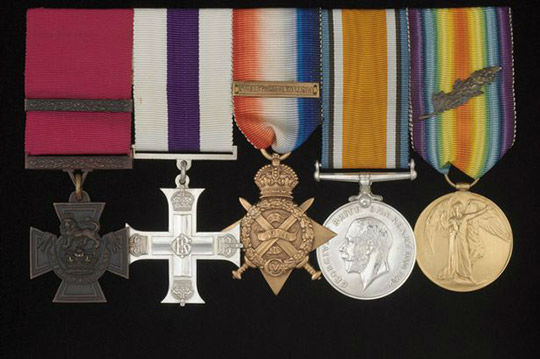 Steeped in history: The Lord Ashcroft Collection, which is on display in the Imperial War Museum, includes a Victoria Cross, far left.

In 2009, the Victoria Cross and Bar which was awarded to Capt Noel Chavasse for service in the First World War was sold to renowned medal collector Lord Ashworth for a reported £1.5m.

This surpassed the previous highest price paid for a VC – which sold for £491,567 back in 2006; a posthumous Victoria Cross awarded to Capt Alfred Shout, a New Zealander who was killed at Gallipoli in 1915 after leading a bayonet charge against heavy machine gun fire with the Australian Imperial Force.

In 2004, the Victoria Cross awarded to Warrant Officer Norman Jackson in the Second World War sold for £235,250. This price was a reflection of the bravery he displayed when crawling along the fuselage of a Lancaster bomber to extinguish a fire at 20,000ft while under attack from a German fighter. He fell from the plane with his parachute on fire and later escaped from a prisoner of war camp. 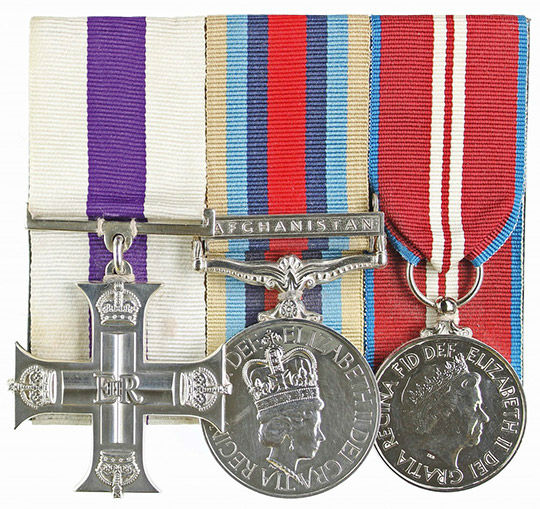 Are medals a worthwhile investment?

Although some medals are highly sought-after and command high prices, on the whole very few collectors buy for investment.

Whenever anyone opts to sell a medal, they rarely make the decision lightly or without a great deal of thought.

Primarily, medal collecting is carried out by those who view themselves as the current custodian of the medal rather than the owner of an investment. Ex-servicemen in particular like to acquire medals which have been awarded to others who served in their regiments.

This love and respect for the historical importance of the medal probably offers the biggest comfort to those who must part with a family heirloom.

That said, medal collecting is a hobby where you should hopefully see a return because prices tend to hold up particularly well. This is certainly the case at the top end of the market where prices have risen sharply in recent years.

Whilst there is a process to appraising the value of medals, it is not an exact science because of the huge number of factors which make an impact on the price.

The most accurate medal appraisers stay on top of the market by constantly buying and selling items, as we do at Warwick & Warwick. This means any changes in collecting fashions and the impact on price are quickly recognised.

Ultimately, a medal is only worth what someone is willing to pay but it only takes interest from two passionate collectors, bidding against each other to raise the price significantly.

To find out more about the history of a medal you own, the following sources are all useful points of reference:

Do you have a medal for our experts to value?

To take advantage of a free medals valuation from one of our resident experts, please send us an email or call 01926 499031 to arrange a personal appointment.