Sword collecting is one of those hobbies which usually begins by accident.

You inherit or buy your first sword, put it on display and get bitten by the bug.

At this point, you probably know very little about antique swords or their history. But with a little research, you can quickly pick up the basics and acquaint yourself with some fundamental knowledge.

The aim of this sword collecting guide for beginners is to give you an insight into:

Hopefully, it will fuel your passion for these historic edged weapons – and help give you an idea of what to look for when buying. 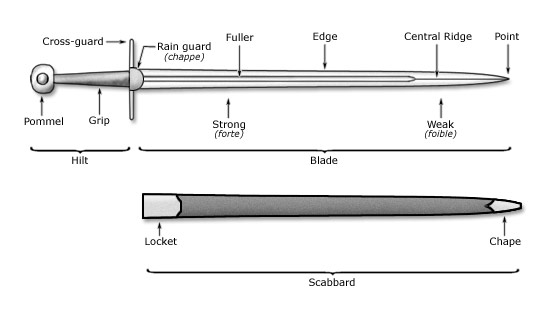 The anatomy of a sword

Swords have evolved over many centuries, with parts added and amendments made to improve how it was handled, its sharpness and length.

Basically, there are two parts to a sword – the blade and the hilt.

Made with a single or double-edge and used to cut, thrust or both.

The blade itself has several parts:

Tip: Sharp end of sword which usually tapers to a point.

Back: Blade part opposite the edge (not present on a double-edged sword).

Flat: The sides of the blade.

Fuller: Groove running along a sword’s length to decrease weight without reducing strength (AKA the blood groove or gutter).

The upper handle part, consisting of the guard, grip and pommel, which is usually made from leather, wire or wood.

The hilt also has several parts:

Tang: Hidden portion of blade covered by hilt, which varies in thickness and width, and usually runs through to the pommel.

Pommel: End of the sword where the hilt is located, which acts as a counterweight and prevents a sword from sliding out of the hand.

Guard: Metal piece preventing an opponent from cutting off your hand, whilst also helping with point control and blade movement.

Many other design features were also added over the years - to signify military rank, social class and the sword or fighter’s country of origin.

Scabbard: Protective sheath for blade made from wood, leather, steel or brass.

Sword belt: Used to carry a sword. Over-the-shoulder belts were known as a baldric.

Tassel: Decorative woven material wrapped around the hand to prevent a weapon being dropped.

A brief history of blades

Knowing about blades, their origin and purpose will help you to understand the wide variety on the market.

Sometimes a sword comes with distinguishing hallmarks, a signature or maker's mark which helps you to identify where it was manufactured and by who.

In general, the same process can be used to classify edged weapons from all over the world.

The 9 most popular swords with today’s collectors are:

A heavy, short, single-edged blade used from the 13th to 15th Century, mainly by Knights in Europe.

This two-edged blade, measuring 44 to 50 inches, was produced in Germany and Switzerland for thrusting, cutting and close contact battles during the 15th and 16th Century.

Also known as a Bastard Sword or Hand and a Half Sword, because of its handle length of 10 to 15 inches, it can fetch around £40,000 from collectors.

A large, two-handed sword used for close contact fighting in the 16th and 17th Century. It boasts a blade length of 50 to 72 inches, a handle of 18 to 21 inches and usually weighs between 6 to 10lbs.

A general term used for a double-edged military sword, from the 17th to 19th Century. Measuring from 30 to 45 inches, it was used for slicing and cutting off limbs.

In the 16th and 17th Century, this was a lightweight, double-edged blade with a thick cross section used to fence, thrust and duel. It is also known as the Rapier after modifications made to the hilt in the 17th Century.

From the 19th Century, it became known as a Gentleman's sword or walking sword and was used to signify military rank or an officer’s class.

A standard sword, made in various styles, used generally in naval conflicts.

Made for battle in the 19th to early 20th Century, its curved blade was used prominently in the Napoleonic Wars, U.S. Civil War, World War I and World War II.

A British 1908 Pattern cavalry trooper’s sword was the type carried in WW1. An average sword of this Pattern will cost between £120 and £250 at auction, depending on any regimental markings which may be present.

Infantry officers have carried swords for centuries and were still using them in WW1. After WW1, they are more for ceremonial purposes.

A good quality WW1 era sword can usually be purchased for between £100 and £200 at auction. Wilkinson Sword is a premier British maker and their blades are individually numbered. From this number you can discover the actual owner’s name, which all add to the history.

Issued to sergeants and musicians of infantry regiments. The Model 1832 foot artillery sword was 64cms in length (25 inches) with a straight, double-edged blade and brass-mounted leather scabbard.

As a sword collecting beginner, you’re probably unlikely to be spending thousands on antique or rare edged weapons in the first instance.

Instead, set a realistic budget and start to acquire swords that that fit your price range.

Remember, sword collecting is a long-term hobby which requires patience and knowledge to help you build a collection.

Military swords from the 19th and 20th century are the easiest swords to collect because there are lots available, they’re easily identified and quite affordable. Most are in a good condition and high availability ensures there are very few forgeries.

Before investing any money, it’s a good idea for new collectors to learn as much as possible about the swords which capture the imagination.

Visit dealers and collectors’ fairs, handle swords regularly and visit an auction house like Warwick & Warwick as this will help you gain a better understanding about the edged weapons available and their value.

As you gain in experience and confidence, you’ll quickly be able to spend a bit more money to acquire higher-quality items.

Before you start adding to your collection, here are some basic sword collecting tips to think about…

Focus on one specialist area or period and learn everything possible to gain expertise.

Once you have a solid foundation, you can begin your sword collecting crusade.

Use your instinct; more often than not it will be spot on.

Army swords are often cheaper than naval weapons, unless they are from a notable regiment like the Grenadier Guards or Household Cavalry.

Usually, 19th and 20th Century military swords are the cheapest and easiest swords to collect because there are more available.

The blade of an authentic Civil War non-commissioned officer's sword should not be bent – as it has probably not seen any action.

The hilt of a sword should be tightly fastened to the blade. If it feels loose, either part may have been replaced.

If a blade has been cleaned, it may be damaged which could reduce the value.

If a sword does not have a matching scabbard, it is worth less in value.

The blade and hilt of a sword should be consistent with its model, period and country of origin. Be wary if the sword does not match with the time period as it may have been renovated.

Modern forgers lack the craftmanship of historic sword makers so spotting a fake is fairly easy.

Metals which were used to produce blades in the past are markedly different from the modern materials which are used today. Bear this in mind if a so-called ‘antique’ sword looks very modern.

If you truly wish to check your sword's authenticity or get an accurate valuation, use the expertise of an antique sword expert - we provide this service free of charge and you can click here for more details.

Sword collecting should be fun, not just an investment

Collecting antique swords is not just an interesting hobby, it can also prove to be a lucrative investment.

However, as outlined above, the classification process can be extremely complex.

To improve your knowledge, visit The Metropolitan Museum of Art – a superb free resource where you can discover free journals written by sword experts and curators.

Or you can access the world's largest online sword museum at Sword-Site – where there is detailed information and photos about more than 800 swords.

Whether you can afford to spend thousands on this alternative investment asset or just a couple of hundred pounds to fuel your interest (and boost your collection), there’s a huge range of swords widely available.

Whilst it is not uncommon for certain historic swords to attract sizeable bids from serious collectors, these instances are rare.

However, the value of edged weapons has risen steadily in recent years and they continue to hold their price well.

Ultimately, as is the case with any commodity or collectable, a rare or antique sword is only worth what someone is willing to pay for it. This shouldn’t stop you from collecting, though, as it’s supposed to be a hobby which is fun, engaging and rewarding.

If you own or discover a sword you think could be rare or valuable, please get in touch - we’ll be happy to provide a free and accurate valuation.