An in-depth guide to Victory medals

The Victory Medal is a bronze campaign medal issued by the United Kingdom to all servicemen, women and nationals of the British Empire who served in any theatre of war operations during World War One, including at sea.

Also known as the Inter Allied Victory Medal, it was first recommended for issue in March 1919 by an inter-allied committee. Each nation was tasked with designing and issuing a Victory Medal to their own service personnel.

The basic design was also used for Victory medals issued by our Allies – including Belgium, Brazil, Cuba, Czechoslovakia, France Greece, Italy, Portugal, Romania, Siam, Union of South Africa and USA. Several other Far East nations issued the medal but with a different design.

Interestingly, it was never issued on its own. It was usually received by personnel who were awarded 1914 Star or 1914-15 Star and/or anyone who received a British War Medal.

These medals were often referred to as Pip, Squeak and Wilfred, in reference to a British strip cartoon published by the Daily Mirror from 1919 to 1956.

A number of Victory medals were later issued for mine clearance in the North Sea from 11th November 1918 and 30th November 1919, as well as intervention in the Russian Civil War up to 1st July 1920.

Any personnel who were ‘Mentioned in Despatches’ from 4th August 1914 to 10th August 1920 wore their medal with an oak leaf on the ribbon. 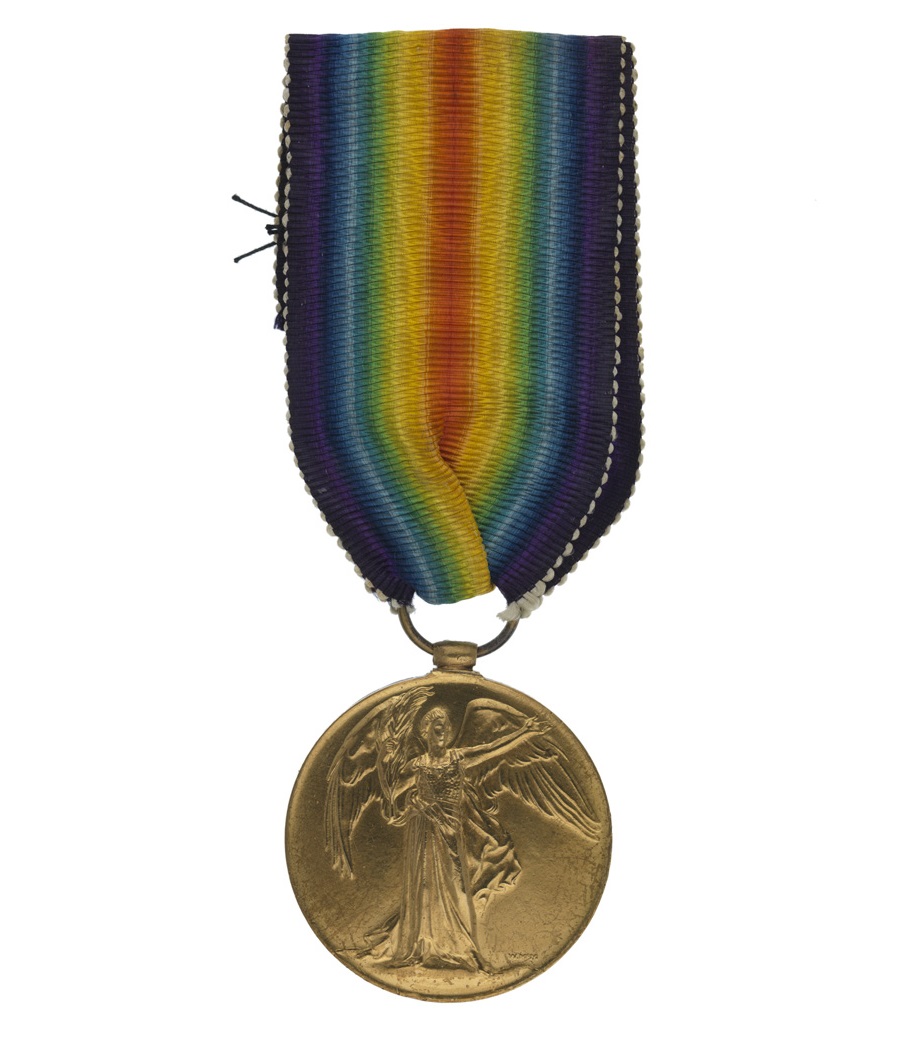 THE VICTORY MEDAL DESIGN AND FEATURES

Designed by William McMillan, the Victory Medal features a winged figure of victory on the obverse and ribbon.

It is similar to the statue on the Queen Victoria Memorial which stands in front of London’s Buckingham Palace, designed in 1901 by sculptor Sir Thomas Brock and unveiled on 16th May 1911.

Obverse design: A full-length winged figure of Victory shows 'Victoria' holding a palm branch in her right hand with her left arm extended. All of the remaining space is bare.

Reverse design: The reverse is inscribed over four lines with the words ‘THE GREAT WAR FOR CIVILISATION, 1914-1919' and surrounded by a laurel wreath.

Recipient's name and unit: Each medal was impressed with the recipient's name, rank, service number and unit on its edge. For medals awarded to Army officers, the name of the corps or regiment was omitted.

Clasp: None were issued.

Suspender: A half-inch diameter ring houses the iridescent rainbow ribbon. The ring passes through a fixed loop at the top, which can move forwards and backwards.

VICTORY MEDALS FOR SALE – WHAT ARE THEY WORTH?

With more than 8 million British and Commonwealth personnel experiencing action during World War 1, it will come as no surprise to learn that Victory medals are NOT rare.

So, how much is a Victory medal worth?

Before trying to work out value, there are a number of factors which MUST be taken into consideration:

For most medal collectors, conducting this research and keeping the memory of a departed veteran alive is what captivates them most.

The personal connections these medals have and the unique insight they provide into unimaginable acts of bravery are the main reasons why we often have Victory medals for sale in our auctions.

As the Victory medal was never awarded on its own, its value is typically related to how rare or prestigious the honours are which accompany it.

For example, the overall worth could rise by several thousand pounds if there was a Military Cross in the medal group.

When accompanied by a Memorial Plaque, which is worth up to £100 on its own and also known as the Death Penny, a Victory medal again becomes more valuable.

The trio of medals nicknamed ‘Pip, Squeak and Wilfred’ should always be sold as a set as this will help to achieve a higher collective value.

In June 2018, we realised £630 when selling a Victory Medal alongside a WW1 British War Medal and Memorial Plaque at auction.

If the original recipient died during a significant battle, such as The Somme, this figure could be upwards of £1,000 but this obviously depends on the circumstances in which they were awarded and their recipient’s history.

When accompanied by other medals, they can obviously achieve significantly more – particularly if it captures the imagination of two enthusiastic collectors at auction.

If you possess any items of militaria or want to know a Victory medals value, please get in touch - our experts can provide fast, accurate and free medal valuations.

If you're keen to learn more, read our How much are my medals worth? guide.

To see all the medals we have for sale, visit our online auction catalogue now!

THE VICTORY MEDAL IN SUMMARY

What’s it made from? Cast from bronze and measuring 36mm in diameter, it featured a clear lacquer coating for a bright finish.

Who was eligible? British and Imperial forces who were mobilised in any theatre of war or at sea, between midnight on 4th August 1914 and midnight on 11th November 1918.

Women who served in any form of nursing or auxiliary forces role, or charitable services, in the theatre of war were also eligible.

What was it awarded for? Campaign service in any theatre of operation during WW1.

How many were awarded in total? 6,334,522 are estimated to have been issued to UK forces.

Who was it designed by? William McMillan.

What was the naming protocol? The recipient’s name, number, rank and unit were impressed in faint block capitals. For officers, the regiment name was omitted.

What ribbon does it feature? Measuring 39mm wide, the merged rainbow pattern emerges from the centre outwards. It is red yellow, green, blue and violet.

What was the suspension? A half-inch diameter ring allows the ribbon to be threaded through. The ring, which moves forwards and backwards, passes through a loop fixed at the top.

How many clasps were issued? None.

What’s it worth today? Victory medals can realise as much as £2,000 depending on the recipient, their history and other related medals.