A guide to Two Penny Blues

The charming Two Penny Blue Stamp is arguably one of the most famous in the world – because of its historic stature as the second official postage stamp ever produced.

Even the fact it was hardly used has failed to dampen its legendary standing.

Whilst most of these stamps are not worth more than a few pounds today, thankfully this doesn’t detract too much from the Two Penny Blue’s iconic philatelic status. 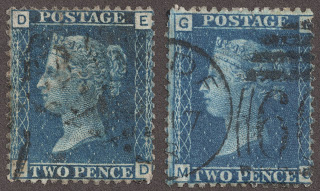 Just like the Penny Black, this stamp was the brainchild of Rowland Hill, who campaigned for a universal postage system during the 1830s.

Issued just days after the first Penny Blacks, the Two Penny Blue Stamp started printing from 1st May 1840 and was produced for use in the UK and Ireland.

It officially went on sale to the public at the London Inland revenue office on 6th May 1840 but, in reality, they were actually only available from 8 May.

Interestingly, though, 6th May 1840 is the earliest postmark seen on a Two Penny Blue. The first issues were printed from plates 1 and 2, which were destroyed in 1843.

After less than a year in production, The Two Penny Blue and the Penny Black were eventually succeeded in 1841 by stamps that were judged to be more secure.

Today, this rarity helps to make these stamps highly coveted by collectors.

A distinctive design, but far from unique

Except for its denomination, the Two Penny Blue stamp features the exact same design as the Penny Black.

Struck from the same die, it is inscribed in capital letters with the word ‘POSTAGE’ at the top and ‘TWO PENCE’ at the bottom. It also featured the image of Queen Victoria that was based a medal engraving created by William Wyon of her aged 15.

Issued in sheets of 240 stamps, initially without perforations, later issues differed from the 1840 issue in having white lines added to the design. Perforations were added in two different gauges and the watermark was also changed.

While the Penny Black was designed so that a letter weighing up to half an ounce could be sent anywhere in Britain, the Two Penny Blue was designed to cover packages which weighed over half an ounce with a one-ounce weight limit. However, the stamp was rarely used because sending a parcel was alien to most people at this time.

The revised version of the Two Penny Blue stamp went on sale in March 1841, having had its design and appearance slightly altered on 27th February 1841. To distinguish it from the original issue, a horizontal line was added at the top and bottom of the label. These Two Penny Blue stamps are referred to as the ‘white lines added issue’ and are far more common than the 1840 original.

The Twopenny Blues issued between 1840 and 1858 were printed from just six plates (1 to 6) and it’s easy for any collector to tell them apart.

As a general rule, the stamps fall into one of three groups:

When were the plates in use?

To discover if you’ve got an 1840 Two Penny Blue in your collection, simply look for a clear white line below the 'POSTAGE' inscription and above the words 'TWO PENCE'. If the white line is absent, you’re probably the proud owner of an 1840 issue.

With just under 6.5million Two Penny Blues entering production, these stamps are far from rare. But they’re still ten times scarcer than the Penny Black, which enjoyed a 68 million one-year print run.

Consequently, these iconic issues are now significantly rarer than the Penny Black. Issues from the first edition, in 1840, are the most valuable and sought-after by collectors.

So, what is the value of used Two Penny Blue stamps?

Today, they are probably worth around 200 per cent more than they were two decades ago. But most are still not worth that much, with examples of the later issues regularly trading online from as little as £10 to £15 in 2021.

Unusual or rare Two Penny Blue stamps might be worth more if they feature a unique cancellation, which are often just as interesting to philatelists as the stamp itself, as outlined in our Stamp Grading Guide. If its cancelled with a Maltese Cross, it’s often worth more than those with a numeral cancellation.

There’s always an exception to the ‘they’re not worth much’ rule, of course. In the 1920s, the largest-known 38-stamp block of 1840 Two Penny Blues, Plate 1, was sold in mint condition to King George V.

A first day cover posted on 6 May 1840 would probably arouse quite a bit of interest amongst collectors. But, unfortunately, the more valuable Two Penny Blues are scarce.

Regardless, the fact these stamps are still in demand – more than 180 years since first being issue – demonstrates their lasting legacy.

Learn more about philately in our Beginner's Guide to Stamp Collecting!