For as long as there have been wars, children have loved to play with toy soldiers.

The appeal of small military figures soared in the late 19th Century, but they’ve even been found in the tombs of ancient pharaohs.

Nowadays, they’re far more than just a bit of childhood fun. For many collectors, they’re a serious investment that could be worth thousands.

This guide is designed to help anyone with an interest in toy soldier collecting so they can discover:

The history of toy soldiers

Mostly standing between 15mm and 105mm tall, toy soldiers is a term which usually refers to any miniature human figure that’s meant to represent a combat character.

Found in Egyptian tombs dating back to 2500 BC, these diminutive soldiers were probably made for ritual purposes rather than as toys.

Early figurines were made from wood, porcelain and silver. Initially, these were crafted for generals and monarchs to be used during war-strategy meetings.

In the 18th century, advances in production saw toy soldiers made from tin, lead and composite. Primarily, they were designed for affluent members of society as they could afford hand-made products with fine detailing.

At the end of the 18th century, metalworkers crafted two-dimensional soldiers from cheap tin, which were widely known as ‘flats’ and sold unpainted.

Early in the 19th century, the first mass-produced toy soldiers were produced in Germany by the Heinrichson, Heyde, and Gebrüder Riechewere companies. These engraved characters were also depicted in silhouette.

In the late 19th century, more realistic figurines were produced in ceremonial dress to resemble various European military movements. These were made by pouring molten lead into a mould. Once cooled, the solid 3D figure was removed, had its head attached and was carefully painted.

In 1893, the way toy soldiers were made was transformed forever when a process known as hollow-casting lead was invented by William Britain (pictured above) in the UK.

William Britain and his hollow-casting revolution

Their hollow-cast production system saw molten lead poured into a mould, which was turned as the metal cooled. Because the mould featured a small opening to allow excess lead to escape, the finished figurine was hollow – making it far lighter and cheaper to make than previous designs.

The earliest soldiers produced by Britains were beautifully hand painted and, obviously, reflected the war campaigns of that era.

Thanks to these advanced production techniques, a red box of nine soldiers could be acquired for a shilling. Although this was relatively affordable, it was still far more than the average daily wage.

The start of the second Boer War in 1899 saw Britains produce soldiers which were used for propaganda purposes, not just as toys.

In 1966, the production of lead-alloy soldiers ceased because use of the potentially poisonous material was banned.

Any toy soldiers made before the 20th Century are referred to as 'ancients'.

Some of Britain’s most interesting figurines are the Egyptian Camel Corps or Indian Cavalry of 1896, which were part of their foreign military series.

Another popular item is the ‘Pipes and Drums of the Black Watch set’ which cost around £1 when it first originated in 1954. An immaculate boxed example can now be worth thousands of pounds.

An early issue of Britains' Pipers of the Scots Guards set, which realised £96 when sold at auction in March 2019

It was not long before Britain’s production methods were imitated by rivals such as A. Fry, C.D. Abel & Co, Hanks Bros, Reka and BMC.

In the UK, John Hill & Co – also known as Johillco – quickly became the main rival to Britain’s after being established by their former employee George Wood. Unlike Britains’ more formal stances, their designs focused on capturing soldiers in lifelike action poses.

In America, Barclays of New Jersey became the biggest toy soldier producer and they were also known for highly creative poses. Established in 1924, Barclays specialised in US and North American fighters as well as Native American figures.

In Europe, the Vienna-based Pfeiffer company developed a new production technique where sawdust, glue, kaolin, and casein were combined to make a composite material. This was applied to a wire frame and figurines were hand painted after drying.

Hausser and Elastolin, a German company, also began to make composite figures of Third Reich Nazi troops in the 1930s. 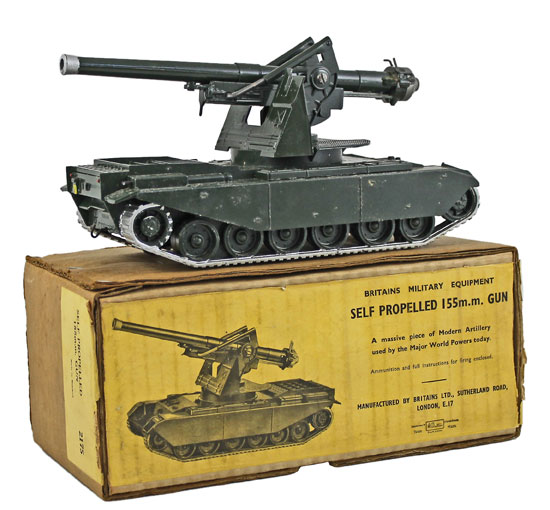 The start of World War II in 1939 saw the production of toy soldiers halted as attention turned to making munitions.

When the fighting stopped, production resumed with the metal figurines marketed as ‘connoisseur figures’ and aimed solely at adult collectors.

Rose Miniatures and Charles Stadden were two of the most popular British manufacturers. A set of realistic hollow-lead set of figures featuring the Knights of the Round Table was designed by Roy Selwyn Smith on behalf of Timpo, an English toy company created in 1938 by Salomon ‘Sally’ Gawrylovitz, a Jewish refugee from Germany.

In the late 1940s, Barclay became one of the most popular UK brands for toy soldiers, which now featured the men in day-to-day action poses.

Manoil became another popular manufacturer and often partnered with Barclay on projects in the 1940s and 50s as there was not much difference between the items produced by the two friendly rivals.

As well as producing Barclay Manoil Toy Soldiers, the two competitors also made barnyard sets, zoo animals and city worker figurines for which they became renowned.

In Europe, France focused hollow-casting efforts on home regiments, made by the likes of LP, Mignot and GM. Italy’s Figur also created and sold detailed figures.

Over in the United States during the post-World War II era, it was Authenticast who led the way, but the hollow-cast method was soon adopted by Edward Jones, whose made a limited number of high-quality toys from their Chicago base.

Manufacturing advances of the 1940s saw the figurines become far more lifelike and detailed than ever before.

The biggest post-war change for toy soldiers was the move towards plastic.

By the 1950s, most figurines were created using a plastic injection mould. Obviously, this meant production became cheaper and faster than metal and lead casting.

Whilst companies like Airfix, Starlux and Reamsa began to produce plastic figures, the established John Hill & Co struggled to make the transition and closed its doors in the early 1960s.

Toymaker Marx began to produce plastic toy soldiers in the 1950s, which no doubt inspired countless numbers of Americans to join the forces.

These classic 1950s Marx green plastic army men, which again depicted servicemen in action, are still massively popular with collectors to this day. In the 1960s, they added a Technicolor range to their arsenal, featuring Native Americans, cowboys and spacemen.

In Asia, the hollow lead toy soldiers made by Trico and Minikins were aimed at the American toy market. Collectors are still interested in their ‘Occupied Japan’ range to this day.

Some of the best-quality plastic soldiers from the 50s were made by Zang Products, which became known as Herald in 1953, before being bought out by Britains. Its best line was the ‘Swoppet’ series which featured characters with interchangeable parts and accessories.

Timpo successfully imitated the style but closed down in 1978 after a detailed set of Viking Warriors proved their final issue.

In 1966, the metal toy-soldier market effectively came to an end in Great Britain because the production of lead figures was banned due to the material’s toxicity.

During the 1970s, the former UK powerhouse that was Britains Deetail once again emerged as a frontrunner on the toy soldiers’ scene.

Following on from the trend created by Marx, their highly-detailed and colourful soldiers were more refined than ever before, along with their animal and civilian figures.

Whilst the toy soldiers made by Britains Deetail are not yet considered vintage antiques, they’re hugely popular and figurines can often be obtained for a reasonable amount today.

In the late 1970s and early 1980s, a mini toy soldiers revival took place as classic lead designs were issued in plastic by Dorset Soldiers, owned by entrepreneur Giles Brown, and Jan and Frank Scroby, makers of the Blenheim, Marlborough and Star lines.

During the 1990s, popular manufacturer King & Country increased the level of detail by switching to matte-finish acrylic paints from glossy enamels. They continue to make figures for recent campaigns in Iraq and Afghanistan.

Click to discover the latest Brittains toy soldiers for sale at Warwick & Warwick!

What factors can dramatically affect a toy soldiers’ value?

Although figurines dating from the 1960s can be highly collectable, it is the earliest and rarest toy soldiers which are often the most highly sought after.

So too are those which depict the unusual or celebrate anything to do with the reign of the British Empire.

The three main factors which affect a toy soldiers’ value are:

As you might expect, a toy soldier’s condition can have a big impact on its value. The better its condition, the more it will usually be worth.

If an item is boxed or has been displayed rather than played with, they will boast a bigger rarity value and can therefore command a premium price from collectors.

As outlined above, certain toy soldier makes are far more popular than others. Check the base of your figurine to see who made it as the manufacturer’s name is usually inscribed. Britains, Marx, Timpo, Trico, Minikins or John Hill and Co often stir the most interest at auction.

Collectors will often try to acquire a complete ‘set’ from a specific war or period in history so these aspects are important. It is therefore important to know whether your figures are from the World War I, the American Civil War, the Colonial Wars or later campaigns.

What are rare toy soldiers worth today?

The long-lasting appeal of toy soldier collecting is the fact that items can be acquired to suit all ages, budgets and eras of interest.

Even plastic cowboy and Indian figures, made by Britain in the early 1970s, can achieve £20 or more each at auction. This is a relatively cheap way to get into the hobby and, with prices continuing to rise steadily, could be a shrewd investment. 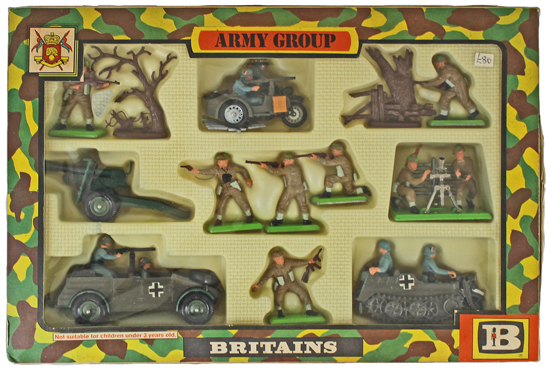 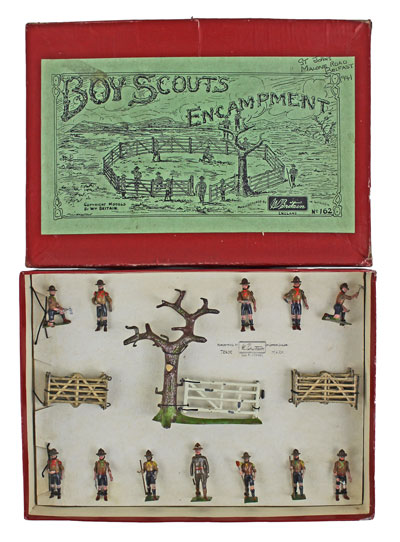 Pristine toy soldiers dating back to the 1930s can be worth thousands, with a British Army presentation case (featuring 275 soldiers and one of every rank) worth between £20,000 to £25,000.

If you’ve spent years acquiring a collection, or recently inherited one which you think could be as valuable as those items mentioned above, arrange an expert toy valuation and discover its true worth.

For an informal discussion or to find out more about a Private Treaty Sale, please get in touch or call 01926 499031 and speak to our friendly experts.

Toy soldier collecting is a growing market – and our team of experienced experts will be happy to provide a free valuation or advice. There's no obligation to sell, so you’ve got nothing to lose – and potentially lots to gain.

If you’re more of a collector, visit our online catalogue to see the rare toy soldiers and sets on offer in our next auction.