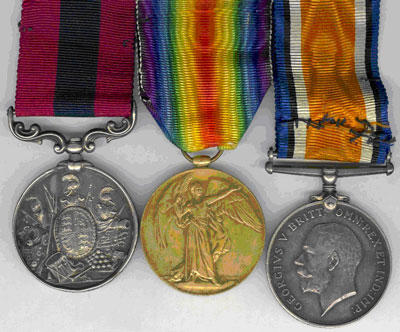 Lewis Barratt originally joined the Leicestershire Regiment on 29th November 1881 with former service in the Leicester Militia. He quickly transferred to the Oxfordshire Light Infantry in February 1882 and moved with the battalion to India in September 1883.

A newspaper cutting records his actions during the 1884 Moplah Riots: Mr Barratt was recommended for the Victoria Cross for his action at Mullipuran during the storming of the Rock Temple in which the rioters took refuge. Volunteers were asked for to lay charges of dynamite at the base of the Temple. Mr Barratt who was then 19 years of age, was one. His action was particularly brave because he laid his charge under a galling fire, and had to return to light it three times. Twice the fuse went out, and the third time while he was exposed to a raking fire, he blew on the fuse, and waited until it was going well. The official report on his action states, “Had he been unable to get away in time, poor Barratt would have been considerably scattered.” Private Barratt was awarded the Distinguished Conduct Medal for his actions on the 29th December 1884. There was only one other DCM awarded for the riots, and this to a Pte Rolph, 2nd Royal Fusiliers.

He was promoted Corporal on 7th February 1885 and Sergeant on 8th December 1885. He returned to England on 11th February 1887 and was discharged for the first time on 27th November 1893 with the DCM his sole entitlement.

He re-enlisted on 3rd October 1901 in the Royal Garrison Artillery and went straight out to Malta. He was reduced to Private by Court Martial on 25th November 1902 for “Failing to appear on parade.” He was discharged for the second time on 8th August 1905 with no further medal entitlement. He was not entitled to the Queen’s Mediterranean Medal as this was only awarded to the infantry battalions sent to Gibraltar and Malta to relieve the regular battalions for service in the Boer War. He re-enlisted for the third time just 15 days before his 52nd birthday on 30th September 1914 as a Sergeant in the Ox & Bucks LI. He went to France on 21st August 1916 and was discharged for the third and final time on 5th December 1918 as no longer physically fit for war service aged 56, his MIC also notes the award of a Silver War Badge No B60470. 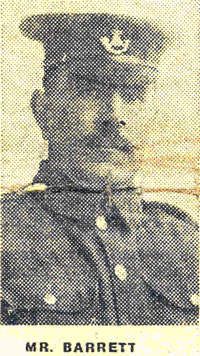 The 1939 Leicester Mercury newspaper cutting records “The death has occurred at the age of 74 of Mr Lewes Barratt of 16, Dane Street Avenue, Braunstone-gate, Leicester, who won the D.C.M. in India in 1884 during the Moplah disturbances and who served in the Boer War and the Great War. Mr Barratt was demobilised after the war, and was employed in the boot and shoe industry. For many years the Barratts’ lived in Chester Street. He leaves a wife, five sons and two daughters.”

The full medal details were: 1884 Moplah Fanatics Riots Distinguished Conduct Medal and WWI BWM and Victory Medal to 9586 Sjt L. Barratt Oxf & Bucks L.I. (Pte L. Barratt 1/Oxford L.I. 29th Decr 1884 on DCM), with 31 copied pages of 3 sets of service records. This is the complete entitlement (less SWB) to a VC recommended soldier covering 37 years of on and off service.