Ballons Montés of the Paris Siege

From September 19 1870 to January 28 1871 Paris was under siege by the German forces during the Franco-Prussian War. The city was totally surrounded by hostile troops and the inhabitants were forced to eat all kinds of animals in order to survive. An ingenious method was used to communicate with the outside world. Within days of the siege starting the Director of Posts organised a system of balloon posts using balloons filled with coal gas, which is lighter than air. Hundreds of volunteer dress-makers stitched the calico canopies at the railway stations, which were not in use because of the siege. Most of the balloons were manned by a pilot or two and occasionally carried a passenger as well as the mailbags. These balloons were referred to as ballons montés. Additionally there were a few balloons which departed without a pilot, containing only mailbags in the gondola. These were referred to as ballons non-montés. Most of the balloons also contained baskets of homing pigeons, which would be used for conveying correspondence back into the besieged city. In total 67 different balloons took off from Paris during the siege, 55 of which were authorised to carry mail. Ideally the balloons would fly over the heads of the surrounding Prussian forces and make a safe landing as soon as possible after clearing the enemy-held territory. The mail would then be posted in the normal manner, in a town not occupied by the enemy. In reality the flights were at the mercy of the winds and several drifted hundreds of kilometers before making a landing. One, the Ville d’Orléans, flew as far as southern Norway before making landfall, though not before the crew dumped one mailbag in the North Sea. Only 8 balloons were lost to the enemy or were engulfed by the sea.

The homing pigeons conveyed by the balloons were delivered to bases at Tours and Poitiers where they were loaded with microfilm messages and conveyed by train as far as possible before reaching the enemy lines. They would then be released and would fly home to Paris with their valuable cargo. Post Office clerks in Paris worked round the clock transcribing the projected microfilm images. In total 60,000 letters were received in this manner during the siege.

The balloon posts were very successful and in total 11,000 kilos of mail were transported. Often letters sent by balloon were endorsed “Par ballon monté” or “Par Ballon non-monté” and in many cases the name of the balloon would be added. Even without this endorsement it is usually possible to indentify balloon post items by reference to the postmark dates of despatch and receipt. Our August 2013 auction contained a few balloon post items and they proved very popular with the bidders.

This attractive wrapper, addressed to Chateauroux, has a Paris, Place de la Bouse c.d.s. of November 22 1870 and was transported by the 28th postal balloon Ville d’Orléans, which left the Nord station on November 24, piloted by Paul Rolier. There was one passenger on board, 4 sacks of letters, weighing 230 kilos and 6 pigeons. The balloon encountered thick mist and the pilot became disorientated, almost touching down in the North Sea at one point. They eventually landed successfully near Christiania (now Oslo), in Norway. This wrapper has a Chateauroux arrival c.d.s. of December 12 and shows no sign of water damage, so the conclusion is that it came from 1 of the 3 mailbags, which were forwarded from Norway, via London, and not from the mailbag that was recovered from the sea by a Norwegian schooner.

This entire is addressed to London and is franked with a 40c stamp. It bears the Paris c.d.s. of December 17 1870 and is endorsed Par Ballon Monté. It travelled on the Davy balloon, named after the British inventor of the miners’ safety lamp. The pilot, with 1 passenger and 70 kilos of mail departed from Orléans station early on December 18 and landed near Beaune, in the Burgundy region, in the opposite direction to England. It finally arrived in London on December 24. 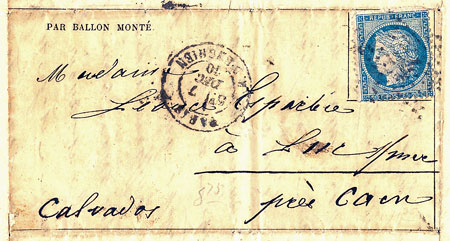 Lettre-Journaux or letter-newspapers were produced for use by the public. They had a printed portion giving the latest details of the siege and a blank portion where the public could write their correspondence. This Gazette des Absents is no. 14 and is dated December 7 1870. It was folded and sent to Calvados on the balloon General Renault. 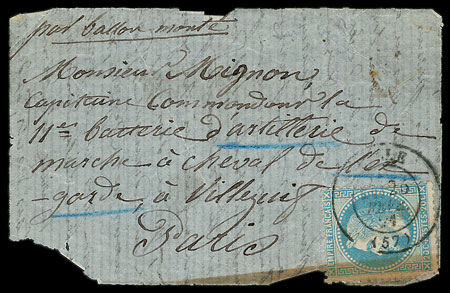 A few attempts were made to use balloons to send letters into Paris during the siege, but only one balloon, from Rouen, made even the start of a return flight and this failed. During January 1871, 3 balloons were readied at Lille, but the armistice made the flights unnecessary. This flimsy entire, addressed to an army captain in Paris, was posted at Lille and was intended to be forwarded by ballon monté.