On seeing an item of French postal stationery recently, with the inscription Carte Pneumatique, it reminded me of my childhood. Accompanied by my mother, I always enjoyed a visit to the local co-op store, not that I was keen on shopping. No, my interest was in watching what I termed a model railway. The co-op and several other stores used a wonderful system of conveying banknotes and coins from the sales counter to the cashier’s booth. The sales clerk would place the money and sales ticket in a small metal cylinder, slide shut the door and place the container in a bronze overhead tube connected to the cashier’s booth.  On activating a lever a vacuum would be created, by an electrically driven compressor, which would suck the container through the tube to the casher’s booth. The change and receipt would be sucked back through a parallel tube. I was enthralled by this system; it was far more interesting than my clockwork railway. This is called pneumatic tube conveyance and the system was widely used in Europe and North and South America until relatively recently, the main user in several countries being the postal service.

In London, in 1853, a tube 1.5 inches in diameter and 220 yards long was constructed between the Electric and International Telegraph Company central station and the Stock Exchange. Cylinders containing batches of telegrams were sucked through it so that traders could obtain immediate international stock prices. The system worked well and was expanded. By 1909 the telegraphic branch of the Post Office had extended the network to 40 miles of tubing. Telegraph forms could be completed at outlying offices and sent by pneumatic tube to the central telegraph office where a skilled operator would convert the text into a telegraph. Provincial towns also introduced pneumatic post systems. The tubes were mainly buried 2 feet under the surface of the ground, though in some cities they were enclosed in the sewers. They had to be airtight and were constructed of lead, encased in cast iron. 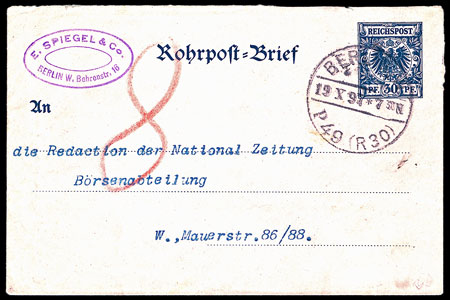 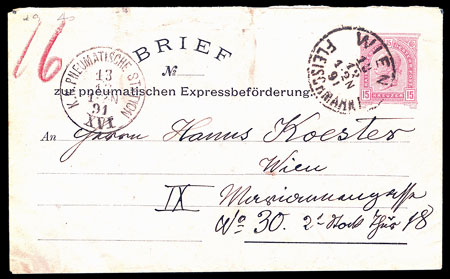 The system was used in continental cities; that in Berlin opened in 1865 and continued in operation until 1976. It extended to 400 kilometers in length. In 1898 alone more than 2.3 million mail items passed through the tubes. On the continent the system allowed not only for the dispatch of telegraphic messages but also for bulk mail. Provision for the transport of individual letters was made in Vienna, Prague, Berlin, Munich, Rio de Janeiro, Rome, Naples, Milan, Paris and Marseilles. Specially printed postal stationery was used in many countries. The only time when individual private letters could be mailed pneumatically in Great Britain was during the South Kensington Exhibition of 1890. 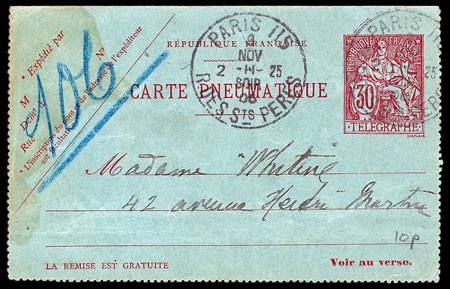 France 1906 30 c “petit bleu” Paris pneumatic post lettercard. The instruction on the reverse warns that it must not contain insertions rendering it inflexible and thus unable to be inserted in the pneumatic cylinder.

In France, Paris was the first city to introduce public pneumatic posts, in 1879, though there had been a connection between the Bourse and the telegraph office as early as 1866. The sender would visit a pneumatic station to write his or her message. This was sent pneumatically to the office nearest its destination, the remainder of its journey being completed by a courier. The process was called sending a "petit bleu", from the colour of the forms used.

The pneumatic post continued in Paris until the 1970s. However the last functioning pneumatic post was in Prague, where the system started in 1889 and remained in use by the government, banks and the media until it was flooded in 2002, after 103 years of service.