The Isle of Man was used as a base for alien civilian internment camps in both World War I and World War II.

During World War One, only males were interned but females and families were also interned during WWII.

Below is a brief history of the Postal Service of the Isle of Man Internment Camps:

Most correspondence from and to prisoners of war was sent free of charge, after being passed by a censor. But with the Isle of Man camps, some of the correspondence bears stamps and in the book ‘Isle of Man Stamps and Postal History’ - a fine hardback published by Dr J.T.Whitney in 1981 – he suggests that there was a limit on the amount of free postage the internees were entitled to. He further suggests that all letters to the UK were charged, but this is not the case as I have viewed several letters sent to the mainland without charge.

During WWI a very large camp (effectively a small, self-contained township) was established at Knockaloe, on the west coast, near Peel. It was originally intended to house 5,000 internees, but, by the end of the war, it had a population of 24,500.

The wooden huts of Knockaloe camp covered 22 acres and the camp buildings included hospitals and theatres. There were printing presses in the camp and Christmas cards and theatre programmes, as well as newspapers were produced.

The camp was such a significant settlement that a railway branch line was constructed to bring in supplies. The General Post Office established a branch post office at Knockaloe Camp and this was supplied with a steel datestamp and printed registration labels. As the images show below, three different oval censor cachets were used at Knockaloe.

It remained the only British post office ever to function within a British prisoner of war camp. 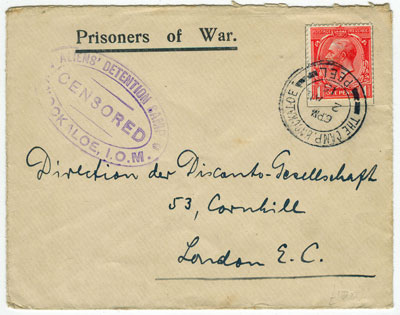 1915 cover to London, franked K.G.V. 1d, tied by Knockaloe Camp steel c.d.s., with oval censor cachet alongside. Three different cachets were in use. 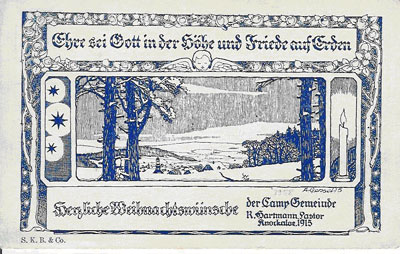 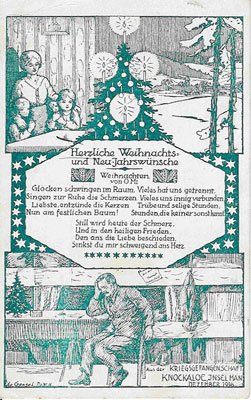 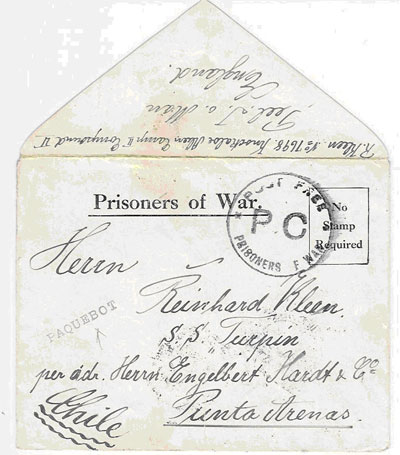 Prisoners of War printed envelope to Chile, from Knockaloe Camp, with circular censor cachet, probably struck in Liverpool and the only recorded example of a paquebot strike on a P.O.W. cover from Knockaloe. 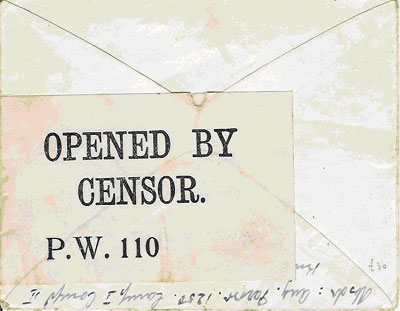 Front and back of Prisoners of War printed envelope, sent to Germany, from Knockaloe Camp, bearing, on the front, the curious and rare circular censor strike “S. i. M.”

There was another smaller camp at Douglas, where about 3,000 prisoners were interned on the site of the former Cunningham Holiday Camp.

Whilst there were three different oval censor cachets used at Knockaloe camp, only two different ovals were used at Douglas internment camp and there was no steel circular datestamp, as the Douglas camp did not have its own post office. 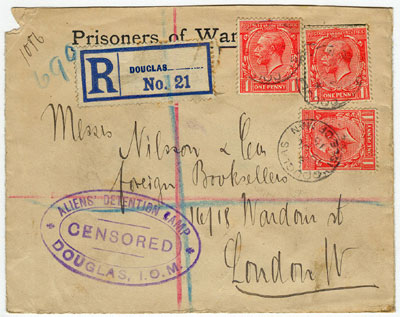 1915 Prisoners of War printed envelope, from Douglas Camp, addressed to London, franked by 3 x K.G.V 1d, tied by Douglas / Isle of Man c.d. s., with Douglas registration label and censor oval alongside. Registered mail from this camp is rare. 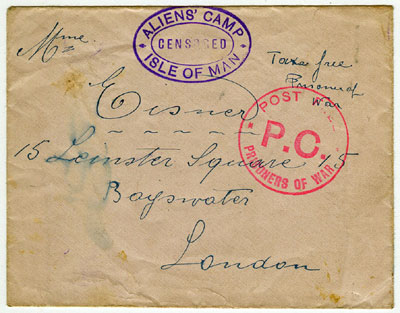 Cover to London, bearing the small oval censor cachet of the Douglas Camp (rarer than the large oval) and the circular censor’s strike, probably applied at Liverpool. 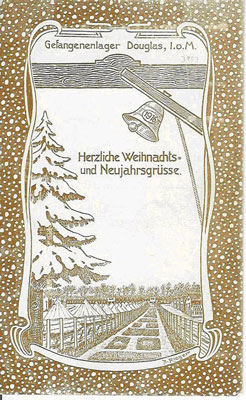 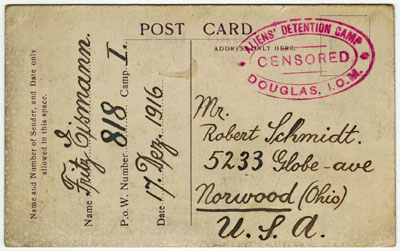 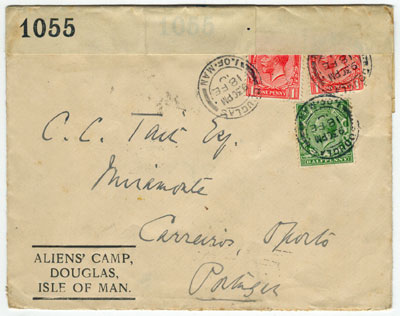 1916 cover to Portugal, imprinted with “Aliens’ Camp, Douglas, Isle of Man”, opened and resealed with a censor label. Such imprinted envelopes are rare. 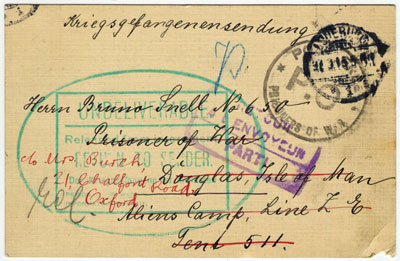 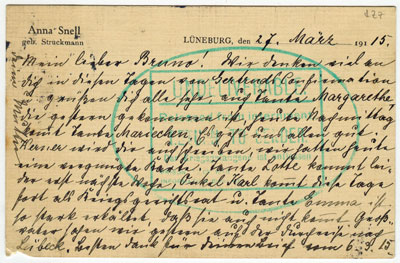 The front and back of a 1915 postcard, sent from Germany, to the Douglas Camp and forwarded to Oxford. The card bears strikes in green, on both the front and the back of the instructional marking “UNDELIVERABLE, / Released from internment. / RETURN TO SENDER. / Der Kriegsgefangene ist entlassen / PRISONERS OF WAR / INFORMATION BUREAU”. It is thought that no other examples of this handstamp exist.

Whereas in the First World War, purpose-built camps were constructed to house enemy aliens, things were very different in the conflict of 1939 to 1945.

During the Second World War, rows of guest houses and hotels were requisitioned in as many as 11 different localities around the Isle of Man and the perimeter of these ‘camps’ was cordoned off by wire mesh and barbed wire fencing.

Such camps were ascribed letters for postal identification purposes, which sometimes featured on the censor handstamps in use in those camps. There is a degree of uncertainty about the camp to which some of the letters refer, as can be seen in some of the examples illustrated below. 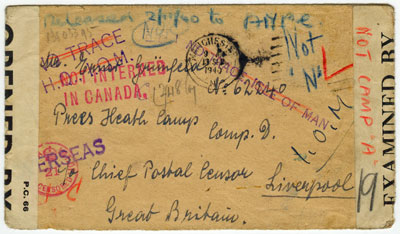 The post office at Douglas was designated as H.Q. and appears to have acted as a forwarding office. This well-travelled cover bears the handstamps “NO TRACE / H.Q. I.O.M.” and “NO TRACE. ISLE OF MAN”. Neither is recorded by Whitney in his 1981 publication and this is believed to be the only cover known with these markings.

Onchan internment camp: Onchan was the first camp to be established in the Douglas area. It was made up of 60 houses on a headland north of Douglas.

These three letter-sheets, to the same addressee (below), written in September and October 1941, show three different handstamps in use at Onchan Camp. The lowest one has been formed by removing letters from the second down. “O” was the code letter for Onchan, but precisely why this was done is unknown. The change would appear to have been made between 10th September and 2nd October 1941. 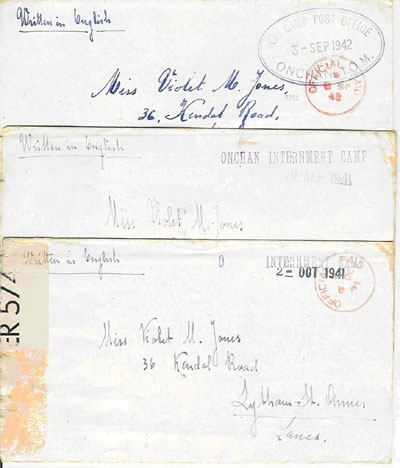 Central internment camp: Central Camp was 34 houses on the promenade in the centre of Douglas and was open for only 10 months. 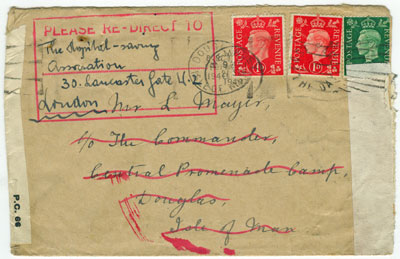 This cover bears the rare strike of the boxed redirection handstamp in red, which was applied at Central Camp, situated on the Douglas promenade.

This redirection slip from Central Camp would have been attached to a redirected letter. It bears an otherwise unrecorded strike “CENTRAL INTERNMENT CAMP / POST OFFICE”, together with a faint strike of the circular Central Camp strike, Whitney 657.

Other internment camps in Douglas: Other camps were named Hutchinson, Granville, Metropole, Palace, Sefton and Falcon Cliff Hospital. Mooragh Camp was in Ramsey and Peveril Camp was a high security camp for British and foreign Fascists, located at Peel. 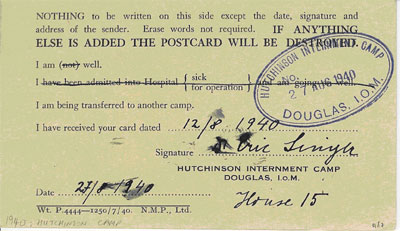 Hutchinson Camp housed German and Austrian males and was located in Hutchinson Square, Douglas. This postcard was for specific use from Hutchinson Camp and bears the only known handstamp of the camp.

Other internment camps in Douglas: Other camps were named Hutchinson, Granville, Metropole, Palace, Sefton and Falcon Cliff Hospital. Mooragh Camp was in Ramsey and Peveril Camp was a high security camp for British and foreign Fascists, located at Peel. 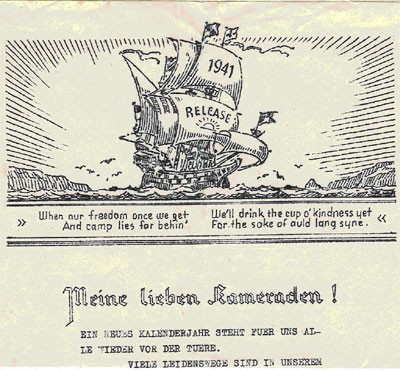 Mooragh Camp, Ramsey, 1941 New Year message from the camp supervisor to the internees. 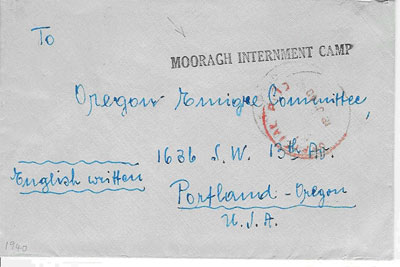 1940 cover to U.S.A. bearing one of the several straight line handstamps used at Mooragh Camp, at Ramsey.

Peveril Camp, at Peel, was the camp where those prisoners considered high risk were interned. In the past the code letter X has been interpreted as applying to this camp. This may be the case, but I have seen 3 incoming items of mail, all addressed to Camp P and all bearing Peveril Camp cachets. 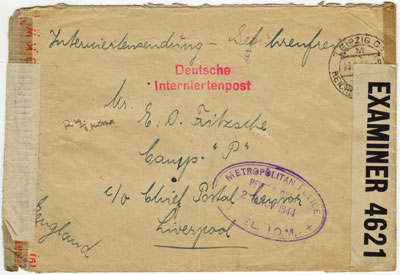 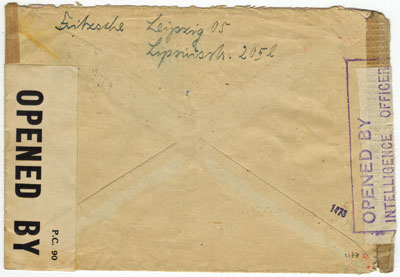 Front and back of a German cover to a prisoner in “Camp P”, bearing the “METROPOLITAN POLICE / PEVERIL / PEEL IOM” dated oval handstamp of Peveril Camp. The “OPENED BY / INTELLIGENCE OFFICER” handstamp is thought also to have been applied at Peveril and is rare.

Rushen internment camp: Women and, later, families were interred at Rushen in the south of the island. Although the number of prisoners varied, as some were released and others arrived, the maximum number of 14,000 was achieved in 1940. 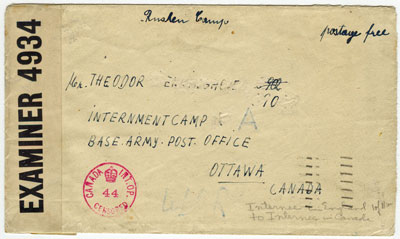 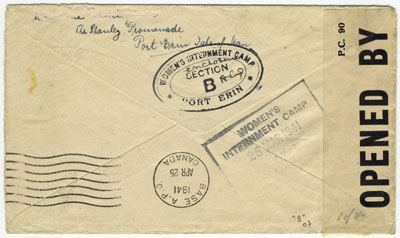 Front and back of 1941 cover from the Rushen Camp at Port Erin, to an internee in an internment camp in Ottawa, Canada. The Section B oval handstamp is rare and not recorded by Whitney. 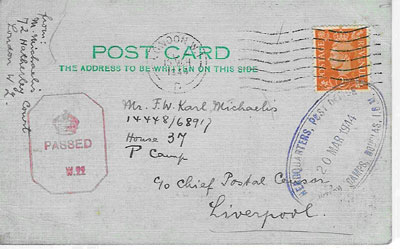 1944 postcard to a prisoner in P camp, bearing the oval cachet of Headquarters, one of 3 different cachets which Whitney describes as in use. 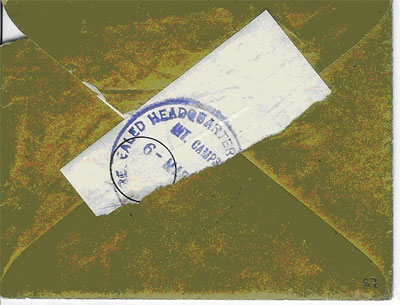 Rare Re-sealed Headquarters handstamp on reverse of greetings telegramme. Not recorded by Whitney.

Hutchinson internment camp: Hutchinson Camp housed German and Austrian males and was located in Hutchinson Square, Douglas. This postcard was for specific use from Hutchinson Camp and bears the only known handstamp of the camp. 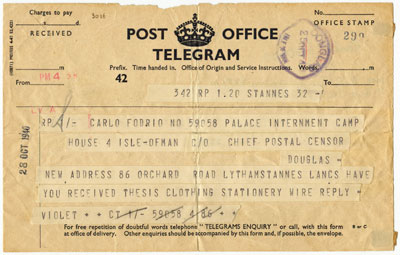 1940 telegram to internee Carlo Fodrio, at Palace Camp, House 4. The cover below, from Carlo, clearly shows his address as “R” Camp, House 4 and on the handstamp, the word “PALACE” has been erased and the manuscript “R” has replaced it. “DOUGLAS” has been removed from the bottom line of the handstamp. Whitney assigns the letter S to Palace Camp, but clearly R was used. 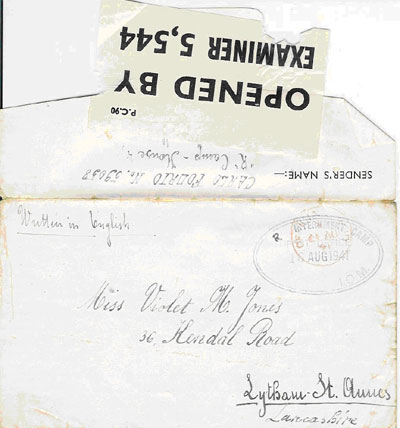 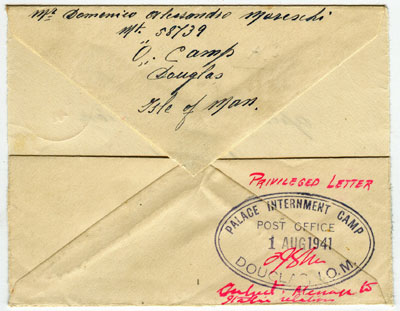 1941 cover to London, bearing the Palace Camp oval. The camp commandant has hand-written “PRIVILEDGED LETTER / Subject: Message to / Italian relatives” This is the only recorded example of this endorsement. Some camps had special permission handstamps. Interestingly the sender quotes “O Camp” as his address, though we know that this letter was used by Onchan Camp. 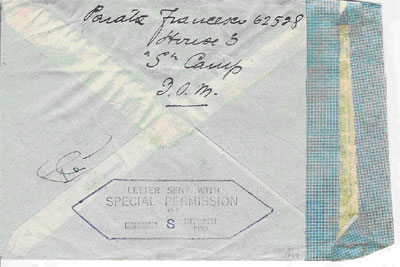 Censored cover bearing the rare special permission handstamp of Camp S, the location of which is uncertain. 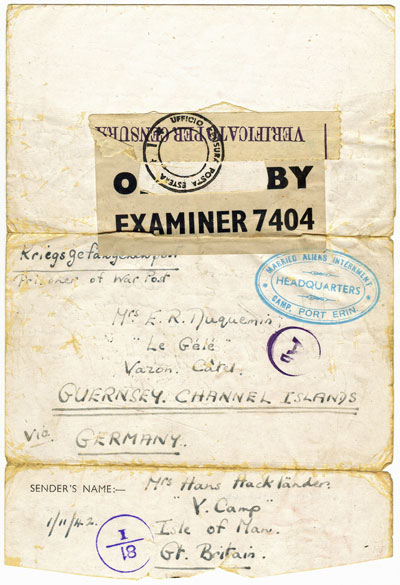 1942 lettersheet from the married aliens’ camp at Port Erin, to Guernsey, via Germany and Spain.

If you own a collection of rare old postcards which you’d like to be valued, please get in touch - our postal history experts will be happy to offer their expertise for free.