The auction contained the magnificent collection of Karl Jaeger of Bath and a report of this section of the sale appears here.

Lot 1 in the miscellaneous collections section of the general sale was a superb album of G.B. topographicals with a pre-sale estimate of £400. It was one of the most popular lots in the sale and eventually sold for £1,150.Lot 2 was a fairly similar collection of G.B. topos. That too had an estimate of £400 and realised £1,121. 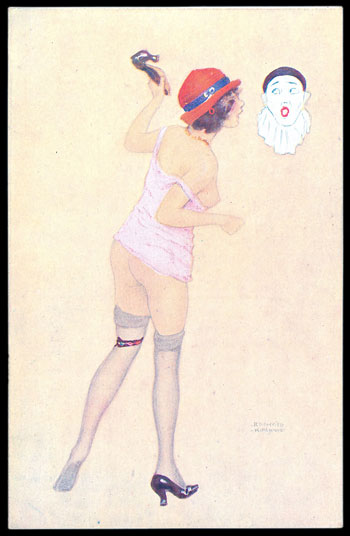 A set of Kirchner’s “Les Péchés Capitaux” (The Seven Deadly Sins), in fine condition, realised £165, in the artist-drawn section and a general glamour collection of 370 cards made £708 (estimate £240).

A collection of World War I military comics and satire contained 220 cards, including 12 Wrench anti-Kaiser and anti-German satire as well as 36 McGills. The interest in WWI is currently at a peak and the realisation of £1,180 was staggering.

Modern cards were represented by an accumulation of 5,000 collector cards in 9 shoeboxes, which made £236 and 750 Pamlin Prints’ Collectorcards, which made £94.

The next Warwick and Warwick auction is on January 21 2015.