A guide to Indian Mutiny medals

THE HISTORY OF THE INDIAN MUTINY

The Indian Mutiny Medal (1857-1858) was a campaign medal issued by the United Kingdom of Great Britain and Ireland to officers and men serving in British and Indian units during operations to suppress the Indian Mutiny, which began on 10 May 1857.

Having first started in the town of Meerut, The Indian Mutiny quickly erupted into other rebellions by citizens in the areas of the upper Gangetic plain and central India.

The mutiny is also referred to as India's First War of Independence, the Great Rebellion, the Sepoy Mutiny and the Revolt of 1857.

The awarding of Indian Mutiny Medals was approved by General Order number 363 on 18th August 1858 and number 733 of 1859 and initially was only to be awarded to troops who served in operations against the mutineers.

But the General Order number 771 of 1868 extended the award to anyone who’d borne arms or been under fire – including members of the Indian judiciary and the Indian civil service, who also became embroiled in the fighting.

It was the last campaign medal issued by the Honourable East India Company and the 1868 order is believed to account for the large number of medals found to this day without bars. 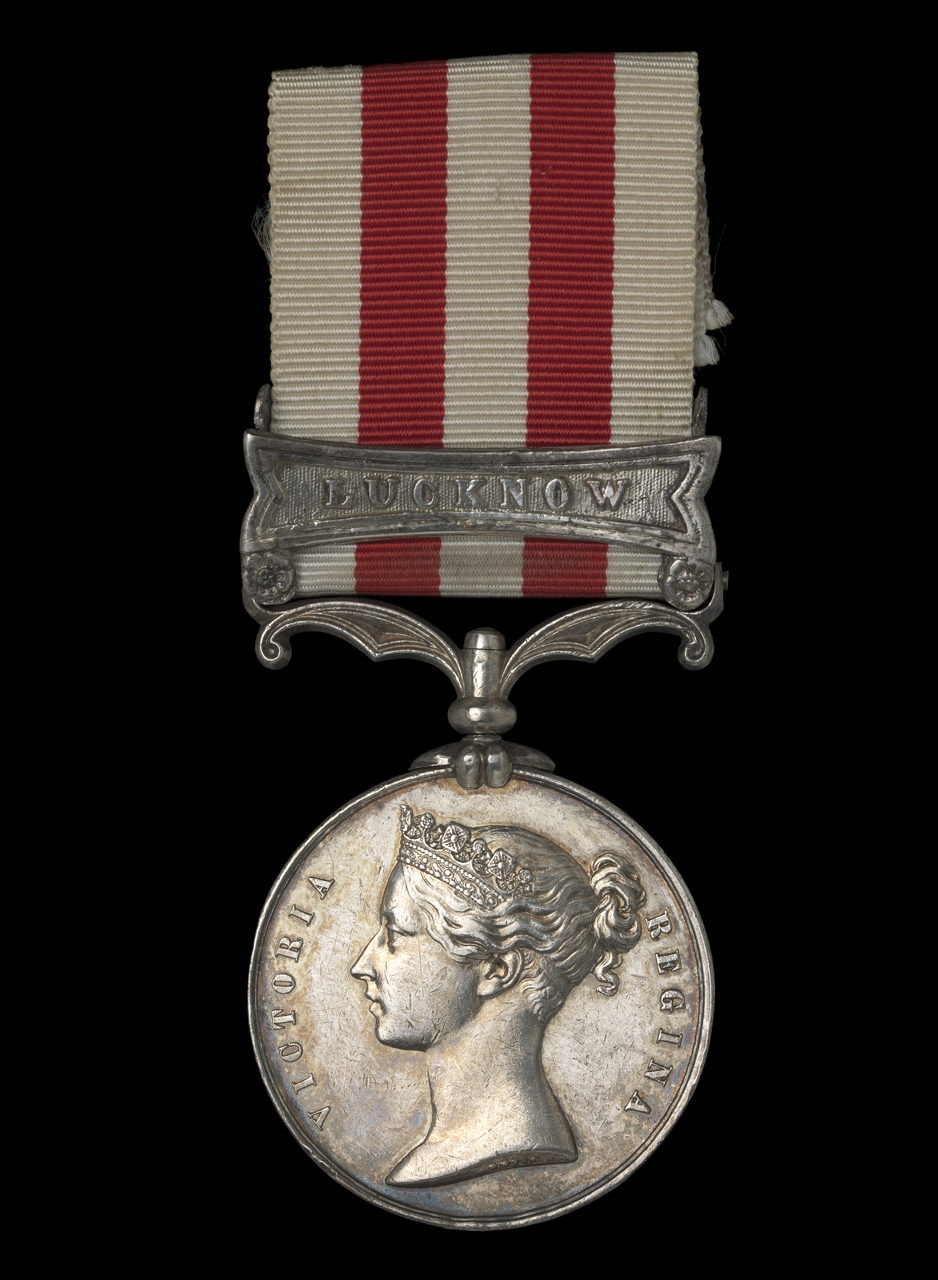 The majority of the Indian Mutiny Medals and clasps are made of solid silver, although some bronze versions were issued to mainly Indian non-combatants. They usually measure 36mm in diameter.

Reverse design (by Leonard Charles Wyon): Britannia standing, cloaked and helmeted, with her right arm extended and holding a laurel wreath. Her left arm supports the Union Shield and her left hand carries a wreath. Standing behind her is the British lion, also facing left, above the word ‘INDIA’ along with the two dates 1857-1858 below.

Recipient's name and unit: Impressed upon the medal’s rim in block Roman capitals.

Clasp (if awarded): Ornate bar with fish-tail ends, supported at either end by a rosette.

Suspender: Ornate horn-shaped bar, cusped and attached to piece by a high-swivelling claw.

WHAT CLASPS WERE ISSUE FOR THE INDIAN MUTINY MEDAL?

Clasps are a single-faced metal bar which are carried on the ribbon attached to a medal, indicating service in a specific battle or campaign.

Often referred to as ‘bars, five clasps were authorised for the Indian Mutiny Medal, but four is the maximum possible awarded to any one man.

Delhi – 30 May to 14 September 1857: Clasp awarded to troops who participated in the recapture of Delhi.

Defence of Lucknow – 29 June to 22 November 1857: Awarded to original defenders of Lucknow, including the principal, masters and boys of La Martinière College in Lucknow who managed to escape and assist in its defence. The clasp was also awarded to the first relief force commanded by Sir Henry Havelock. Medals to the original defenders are very sought after by medal collectors.

Relief of Lucknow – November 1857: Clasp awarded to the second relief force which was under the command of Sir Colin Campbell.

Lucknow – November 1857 to March 1858: Clasp awarded to troops under the command of Sir Colin Campbell who engaged in final operations leading to the surrender of Lucknow and the subsequent clearing of surrounding areas.

Central India – January to June 1858: Clasp awarded to all who served under Major-General Sir Hugh Rose in action against Jhansi, Kalpi, and Gwalior. This clasp was also given to those who served with Major-General Roberts in the Rajputana Field Force and Major-General Whitlock of the Madras Column, between January and June 1858.

Historically, the Indian Mutiny Medal was first issued without a clasp to those who served in operations against the mutineers.  As a result of the 1868 extension of eligibility, the majority of these clasp were awarded to people who subsequently became entitled to a medal.

Usually, clasps are read downwards from the top of the medal. So, the first clasp earned should be worn nearest to the medal, with the latest to be issued at the top. 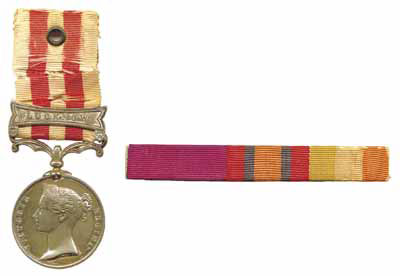 INDIAN MUTINY MEDALS FOR SALE – WHAT ARE THEY WORTH?

Museums and collectors are captivated by these medals and the extremely personal connections they carry, so these cherished items will always prove popular.

Because they offer a unique insight into the acts of bravery displayed during an historic campaign, we often have Indian Mutiny medals for sale in our auctions.

Back in May 2007, the 1857 Indian Mutiny Medal with Lucknow clasp issued to Major Coote Synge-Hutchinson, 2nd Dragoon Guards and Victoria Cross / QSA/KSA ribbon bar issued to his nephew, Major Edward Douglas Brown, was sold on behalf of the family and realised £2,128.

More recently, Indian Mutiny medals have been known to fetch anything from a few hundred pounds up to as much as £5,000. However, this depends on their history and circumstances in which they were awarded.

If you own a medal which you’d like to be valued, please get in touch - our experts have been providing fast, accurate and free medal valuations for many years.

To browse all the medals we have for sale, visit our online auction catalogue now!

THE INDIAN MUTINY MEDAL IN SUMMARY

What’s it made from? Silver, measuring 36mm in diameter

Who was eligible? British and Indian forces

What was it awarded for? Campaign service

Who was it designed by? Obverse: William Wyon. Reverse: Leonard Charles Wyon

What was the naming protocol? The recipient’s name and regiment or ship is indented in Roman capitals.

What ribbon does it feature? 32mm white with two red stripes.

How many clasps were issued? 5 – Delhi, Defence of Lucknow, Relief of Lucknow, Lucknow, Central India

What’s it worth today? Indian Mutiny medals can realise up to £5,000 depending on the recipient and history.