The 2020 series of stamp auctions kicked off with some superb British classics. A collection consisting of 189 Penny Blacks along with 52 Penny reds from black plates inevitable attracted a lot of interest. Described as ‘condition well above average’, the lot sold for £11,700.

A very unusual King Edward VII 2/6d with advertising menu printed on the reverse sold for £240. 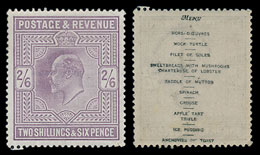 The St Helena 1961 Tristan Relief overprint set was issued to benefit Tristan Da Cunha islanders following the 1961 volcanic eruption, you can read more about the stamps here. Only 434 sets were sold so they are very sought after by collectors and a set included in the auction achieved £2,640.

A bidder paid £228 for an Australia 1915-27 Kangaroo 10/- in aniline pink and a collection of Morocco Agencies overprint issues including blocks & varieties found a home for £750. 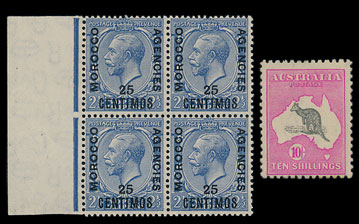 Before Madagascar became a French Colony in 1895, Britain had close diplomatic links with the Merina monarchs, resulting in the issue of Consular stamps for local and overseas mail. A collection of Madagascar issues from British Consular stamps, French Post Offices, Madagascar & Dependencies through to Independence in 1960, described as ‘rarely seen this complete’ sold for £900, 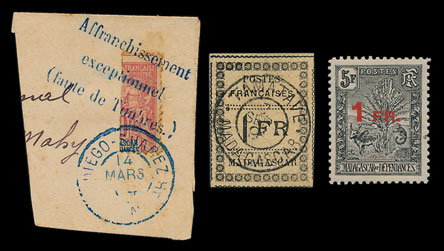 There was good value to be found in Vatican City, where a 1934 surcharge set, offered with a Roumet photo certificate sold for £120. The Michel catalogue value of the set is currently €2,000.