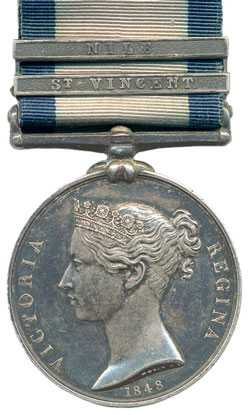 According to the Naval General Service Medal roll this unique name / clasp combination was issued to a Royal Marine Drummer who earned both clasps serving aboard H.M.S. Orion. He appears to be the only Drummer on the roll for St Vincent

H.M.S. Orion was a 74 gun third rate ship of the line launched in 1787. She took a prominent part in the defeat of the Spanish fleet at the Battle of Cape St Vincent on 14th February 1797. This was a significant victory as only 15 British ships had defeated the larger Spanish fleet of 27 including the capture of four prizes and over 3,000 prisoners. HMS Orion suffered 9 wounded during this battle. After the defeat, the Spanish fleet was contained in Cadiz and HMS Orion took part in the blockade of Cadiz from March 1797 to April 1798. She was then released as part of a squadron under Nelson sent back into the Mediterranean to pursue the French fleet.

On 1st/2nd August 1798 Nelson finally caught up with the French fleet that had landed an army on the Egyptian coast. At the Battle of the Nile, Nelson’s fleet attacked the French fleet lying at anchor in Aboukir Bay, near Alexandria. The French commander, Vice Admiral Brueys D’Aigalliers believed that his fleet was close enough inshore to present a formidable threat to any attack and the shoals would prevent any ships passing to his landward side. When Nelson discovered the French fleet he ordered an immediate attack. The British fleet split in two, and one half managed to sail between the French ships and the shoreline, something the French commander thought was impossible. This meant the French ships were bombarded from both sides and during a three hour battle the French ships at the head of the column were battered into submission.

HMS Orion under Captain Sir James Saumarez was part of the squadron that sailed close to the shore and the Orion destroyed the frigate Serieuse with a single broadside. The Orion them attacked the fifth and sixth French ships of the line Peuple Souverain and Franklin. As the battle raged into the night, the French flagship Orient exploded at about 2200 hours when a fire reached its magazines. Of the French fleet of 13 ships of the line and 4 frigates, only 2 ships of the line and 2 frigates who were at the rear of the French line managed to escape. The remainder were either sunk or captured as prizes.

HMS Orion suffered 13 killed and 29 wounded during the battle.