The Military General Service Medal, with the 8 clasps of Roleia, Vimiera, Corunna, Fuentes d’Onor, Vittoria, Pyrennes, Nivelle and Nive, together with the Waterloo Medal, awarded to Thomas Roche, of the 71st Foot, realised £3,910 in the December 10th 2008 sale. 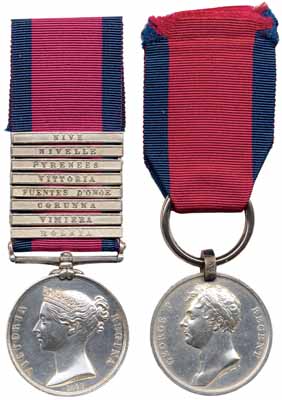 The 1/71st sailed from Ireland on 12th July and arrived in the Peninsula on 1st August 1808. They were almost immediately involved with the first action of the campaign at the Battle of Rolica on 17th August 1808, where only the light infantry company was involved. Private Roche was slightly wounded in the leg at this battle. Four days later the whole battalion was heavily involved at the Battle of Vimiera, suffering 112 casualties. They then took part in Moore’s advance into Spain followed by his retreat to Corunna and subsequent evacuation.

In 1809 the battalion was involved in the Walcheren Campaign and returned to the peninsula in 1810, where it fought all the way through Wellington’s campaign. The first major engagement for the 71st Foot on their return was the Battle of Fuentes d’Onor on 3rd-5th May 1811, where the French were trying to lift the siege on Almeida. The French succeeded in capturing the village of Fuentes d’Onor on the first day but were later driven out by a British charge, including the 71st Foot, who suffered 127 casualties during the three day battle.

Private Roche was slightly wounded for a second time at Arrayo Dos Molinas on 28th October 1812, this time in the head. The 71st Foot were again heavily involved in the Battle of Vittoria on 21st June 1813, suffering a further 318 casualties killed or wounded, with Private Roche being present.

In January 1815 the 71st Foot were ordered to sail for America but bad weather delayed the sailing by two months, by which time Napoleon had escaped from Elba and their presence was required elsewhere. The battalion distinguished itself at the Battle of Waterloo and suffered the loss of 16 officers and 198 men killed and wounded.

Thomas Roche served a total of 12 years and 175 days, being discharged at Weedon, Northampton, on 5th May 1819, due to being old, stiff and undersized! He was later admitted as an “In-pensioner” at Chelsea Hospital and he died there on 14th May 1861 at the age of 72.