The 1847 Naval General Service Medal with Java and Algiers clasps, to Lieutenant Robert Wintle Innes, Royal Navy, was offered in our auction on Wednesday 19th October 2011 estimated £3000. The realisation was £4,140. 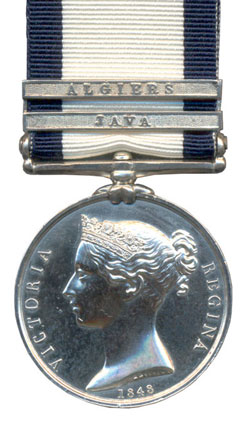 Robert Wintle Innes entered the Royal Navy on 21st April 1807 as a 1st Class Volunteer on the sloop HMS Favorite. He first served off the coast of Africa and the West Indies where he moved to HMS Goelan. In 1808 he joined the 32 gun fifth rate frigate HMS Cornelia and moved to the East Indies.

While with HMS Cornelia he served on shore as a Midshipman at the taking of the Isle of France in the Indian Ocean in August 1810. The fleet moved on to the Dutch held island of Java and Innes served ashore again at the storming of Fort Cornelis during the operations connected with the reduction of Java. Fort Cornelis was a large fort over a mile in length in mounting nearly 300 cannons along it walls. The British captured the station of Weltevreeden in August 1811, which provided a base from which to clear trails through the surrounding forests to bring up their siege guns. There was heavy fighting over a few weeks before the fort finally sucumbbed with the siege costing the British 630 casualties.

He returned home in 1812 on HMS Piedmontaise, then served on HMSs Thisbe, San Josef, Queen Charlotte where he was promoted to Lieutenant. In 1814 he joined HMS Harrier serving off the Canary Islands, then in 1815 he joined HMS Rifleman and Pique, 1816 HMS Glasgow in which he fought at Algiers with the ship seeing a lot of action. He commanded HMS Ionia in 1821 followed by a number of other ships, finally in command of HMS Pandora in 1836 and retiring on half pay in 1842. He subsequently died in 1850.

It was offered together with large qty of research and copied service records, also copies of wills, census and other records. A rare medal to an officer of the Naval Brigade landed at Java.