WW1 Air Force Cross and 1917 Sea Gallantry Medal to George Ritchie Hodgson is offered for sale in our 14th December medal and militaria auction with an estimate of £2,000. 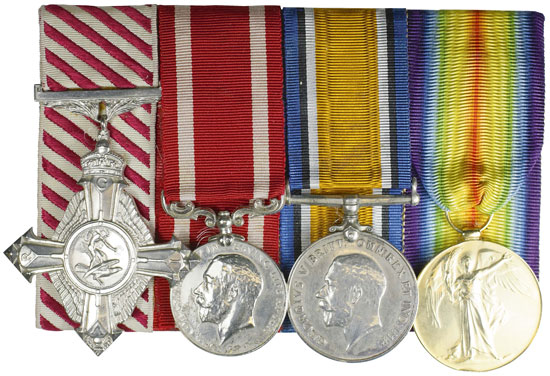 George Ritchie Hodgson was born in Montreal on 12th October 1893. As a swimmer having had no formal training, he shocked the swimming world when he won the mile event at the 1911 Inter-Empire Championships and was undefeated at the Canadian National Championships from 1910-12. He was Canada’s only representative in the swimming events at the 1912 Stockholm Olympics where he won gold medals in the 400m freestyle in an Olympic record and 1500m freestyle in a world record. For the one race he was actually credited with 4 world records, 1000 yards, 1000 metres, 1500 metres and he carried on swimming and broke the 1 mile record as well. After WW1 he swam in the 1920 Antwerp Olympics in both his gold medal events but failed to make the finals. Considered by many to be Canada’s greatest swimmer, he was inducted into Canada’s Sports Hall of Fame in 1955 and the International Swimming Hall of Fame in 1968. 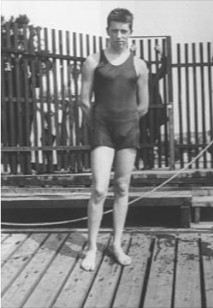 He was commissioned in the Royal Naval Air Service on 18th January 1916 and qualified as a seaplane pilot on 17th May 1916.

The Sea Gallantry medal was awarded to the 4 members of the seaplane crew who: “on 29 May 1917, these officers and men were flying on a seaplane at a height of 1,200 feet, 40 miles East of Felixstowe, when they sighted an object in the water. They immediately circled and descended, and the object was discovered to be an upturn float with two men on it. Despite the rough sea, they landed their plane on the water close to the float, and on a second attempt succeeded in rescuing the men, an officer and an air mechanic who had been without food and water for 5 ½ days. The plane was so damaged through landing in the heavy sea that it was unable to rise and they therefore taxied to the channel 3 miles due south of the Shipwash. By the time they arrived there, the tail of the machine was full of water, but in response to distress signals assistance was obtained and the plane was got to land. Considerable risk was incurred in rendering the services on account of the heavy sea.”

In 2008, Warwick & Warwick sold the medals of the rescued observer and details of their ordeal were;   On the 24th May 1917, Air Mechanic 2nd Grade Wright was flying as observer, with Sub Lt H.M. Morris, in a seaplane over the North Sea on patrol duties and submarine searching, when their plane crashed into the water. For six days, with little to eat, they held on to one of the plane landing floats that fortunately survived the crash. Part of a newspaper article describes their ordeal: “There was also the danger of going to sleep, and we could not do that. When we had been hanging on to the float about five or six hours I said to Wright, ‘I think I could do with a square meal.’ His teeth were chattering with the cold, and it took him quite a long time to say ‘Same here.’ Then he said, ‘I believe I’ve got something in my pocket.’ He brought out a waterproof envelope full of milk tablets. There were twelve altogether and we decided to have one a day each.” “I think it was on the third night we heard a squadron of German airplanes returning from a raid. One of them circled round us and fired a verey light and then flew on to join his companions. In any case we did not expect any help from them, for if they had landed in the dark, it is ten to one they would have hit one of the mines clustered about us.”  “But on the sixth day we were just about finished. Our tablets were finished and I was having a rotten time with swollen limbs, through swimming round the float for exercise. We were both at the last gasp and could hardly find the strength to cling to the ‘raft’. When the seaplane containing Flight Commander Lindsay Gordon and Flight Lieutenant G. Hodgson arrived on the morning of May 29 we could scarcely believe it. But when we were understood that it was a rescue, we both gave in and fainted.”

Captain George Ritchie Hodgson’s award of the Air Force Cross was announced in the London Gazette dated 1st November 1918 in recognition of valuable flying services performed in their various capacities.

The group consists of WW1 Air Force Cross (un-named as issued), 1917 Sea Gallantry Medal to George Ritchie Hodgson 29th May 1917, BWM and Victory Medal to Lieut E.C. Cumberland, court mounted as worn. Sold with mounted miniature trio of AFC and pair and C.E.F. For Services at the Front enamelled lapel badge. The medals are being sold on behalf of the family who informed us that his gold medals were stolen years ago while on display at the Montreal Amateur Athletic Association. Lieut Cumberland was a family friend who lent Hodgson his WW1 pair when Hodgson could not fine his. Cumberland’s MIC states he was issued a duplicate pair in 1923.