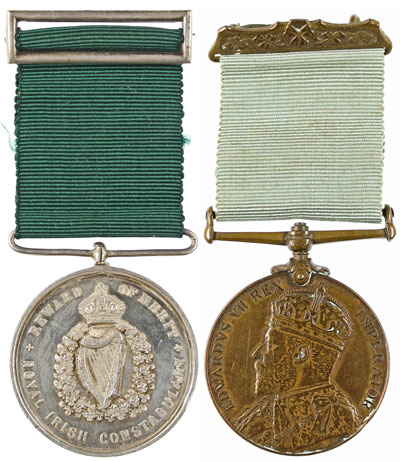 A 1920 Irish Constabulary Medal and a 1903 Visit to Ireland Medal pair, to 56108 Constable Jonathan Holmes, Royal Irish Constabulary, was sold in our 22nd April medal and militaria auction and realised £5,900.

On the night of 27th/28th May 1920, approximately 70 IRA volunteers were involved in the operation to attack the Kilmallock Barracks in Limerick, which was defended by approximately 15 policemen. The barracks were a substantial single floor structure in the centre of the town with steel shuttered windows with firing slits. Its weakness was that it was overlooked by several 2 story buildings, Clery’s Hotel, a bank and a grocers. The IRA occupied these 2 storey buildings with 30 men detailed with the actual assault before any firing had begun. The attack commenced with the IRA throwing several 56lb weights from the higher buildings to crash through the barracks roof, immediately followed by a torrent of incendiary and petrol bombs. By this action they eventually succeeded in setting the barracks' roof ablaze in the hope it would force the Police to surrender. After 6 hours continual fighting the barracks were a blazing furnace, but the Police managed to withdraw to a small strongly protected building at the rear of the barracks where they continued to hold out. With the likely arrival of police reinforcements, the IRA called off their attack which had succeeded in completely destroying the main barracks, killing 2 policemen and wounding several others, for the loss of 1 man, Liam Scully.

It is almost certain that the Constabulary Medal, which by 1920 was only issued for gallantry, was issued for Constable Holmes’s bravery in this action.

It was offered together with a 1918 Sugar Registration Ration Card named to Jonathan Holmes, Kilmallock, various copied research including a photo thought to show 5 RIC survivors of the attack including a Constable Holmes.

Jonathan Holmes was born in Sligo in 1874 and enlisted in the Royal Irish Constabulary in 1893. By the time of the 1911 Census he, his wife and 5 children were living at 27 Wolfe Tone Street, Kilmallock with his occupation listed as RIC. Only 315 Constabulary Medals were issued, so this was a scarce award for a major action.