The incredible 24th June 2003 Battle of Majar al Kabir Conspicuous Gallantry Cross and Iraq Medal to Sergeant Gordon Robertson 1 PARA is offered for sale in our 20th April medal and militaria auction with an estimate of £80,000 - £100,000. 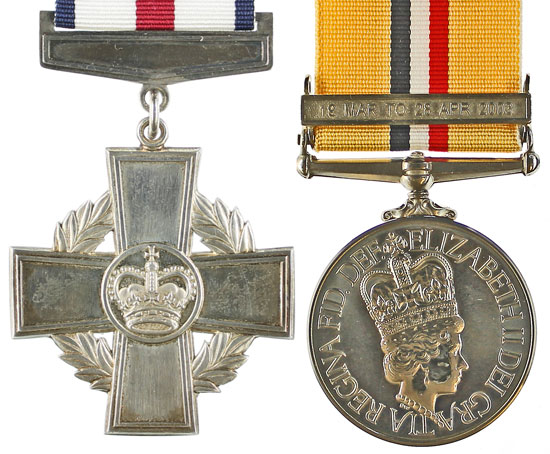 Gordon Robertson enlisted in the Parachute Regiment on 31st October 1989 and passed out as champion recruit of Rhine Platoon (554) on 20th July 1990 and was posted to 1 PARA. He served on tours of Northern Ireland in 1991/92, 1994/95, 1997, as well as serving in France, USA and Brunei. In 1999 he and a colleague broke the military world marathon record, completing the London Marathon in 4 hours and 14 minutes, in uniform and carrying a 40lb bergan, beating the previous record by 5 minutes. He left the army as a corporal on 9th June 2000, but re-enlisted some 6 months later and was posted as a Recruit Instructor at Depot Para. He passed out as top student at tactics on Platoon Sergeants' Battle Course and top student with distinction on Senior Brecon and left the army for the second time in 2004. But it is in Iraq in 2003 that this story really comes into its own. 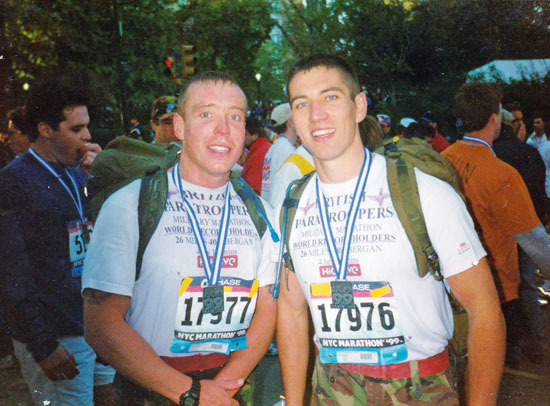 After the “war fighting phase” of the Iraq War had concluded in April 2003, the 1 PARA Battle Group was left to patrol and police Maysan Province in Southern Iraq, an area roughly the size of East Anglia. 8 Platoon, C Company, 1 PARA consisted of 2 multiples, Two Zero Alpha commanded by Lieut Ross Kennedy and Two Zero Bravo commanded by Sgt Robertson (Robbo). At 0925 on the 24th June, 8 Platoon arrived in vehicles at the town of Majar al Kabir, which had a population of 60,000. The initial plan had been to conduct a foot patrol through the town, accompanied by friendly Iraqi militia, but they advised 8 Platoon that there were “bad men” present, and so the patrol was conducted in their Pinzgauer vehicles. The 2 callsigns split up to cover more ground, leaving Robbo in command of his 12 man callsign, Bravo. As their patrol slowly drove through the town, it was confronted by ever increasing crowds who were becoming more hostile by the minute, and who soon started throwing stones at the Paras. When the Paras left the vehicles to force a way through the angry crowds, they noticed the accompanying Iraqi militia had fled. At 1025, as the situation deteriorated drastically, and unable to communicate with HQ due to the signal being blocked by the surrounding buildings, Robbo gave the order to Cpl Dolman, armed with a baton gun, to fire on the Iraqi ringleaders. The baton round only seemed to anger the mob more and as they looked to extract their vehicles, the Paras fired several warning shots over the heads of the mob which made them temporarily withdraw, giving the Paras some breathing space. At 1030 the Paras suddenly came under sustained AK47 gunfire and the Paras returned fire, with casualties inflicted on the attacking Iraqis. Alpha were at Militia HQ, in another part of town, and they too came under fire. The two callsigns were unable to find each other to provide mutual support due to communication failures. At 1037 with Bravo established on the eastern riverbank, Robbo finally managed to get radio communication with the Operations Room to report the contact. Even at this early stage of the contact Robbo reported they were running low on ammunition. Due to the post war scaling down, the Paras were only carrying 100 rounds each for their SA80s and 400 rounds for the GPMG. By 1050 Alpha, with great difficulty, had managed to drive out of the town and Bravo, under Robbo, were on their own. They formed a defensive perimeter near the centre of the town. At about this time both of Robbo’s Pinzgauers were struck by RPG7 rockets and destroyed. At 1055 Alpha were ordered to go back into town to find Robbo’s callsign and help extract them, but in the face of heavy opposition, were not able to achieve this objective. By now Bravo’s situation was becoming critical as they came under Dushka heavy machine gun fire as well as fire from the large number of AK47s. Robbo and his men began to fire and manoeuvre to get out of their predicament. By 1105 the Chinook carrying the Airborne Reaction Force (ARF) was airborne heading for Al Majar. As Robbo’s callsign had managed to fight its way temporarily clear of their pursuers, he opted to "go firm" in an occupied Iraqi house while waiting for the ARF support to arrive.

In order to identity their location to the Chinook, at the last moment Robbo left the building and fired several miniflares. The problem was that it also identified their position to the Iraqis searching for them, who then opened fire on Bravo’s new position. At 1120 just as the Chinook was approaching their position, it was riddled with heavy automatic fire causing multiple casualties in the hold. The pilot had narrowly avoided 3 RPG7 rockets fired at the helicopter, but could not avoid the huge volume of AK47 fired at them and had to abort the mission and take the wounded back to camp.  The Iraqis were now closing in on Bravo’s position and Robbo’s men were firing single shots due to the critical ammunition shortage. By 1135, Robbo decided they couldn’t stay static any longer or they would be overrun due to ammunition shortages. They executed fire and manoeuvre procedures to get them away, identifying enemy firing positions to each other as they fought their way out.

Meanwhile, at 1138, the vehicle-borne QRF had arrived at Alpha’s position and immediately came under fire, which they returned with the .50 heavy machine guns mounted on the WMIKs. Robbo’s men were now close enough to hear the .50 fire and were concerned about blue on blue casualties, as he was not sure the QRF knew their position. At 1145 Robbo ordered Pte Freddie Ellis to take a message across the bullet-swept ground to the Scimitars of the HCR which had also arrived and were engaging the Iraqis to let them know Bravo’s position. Pte Ellis got safely to the HCR, which provided covering fire as Robbo and Bravo extracted from their position with just a few rounds left in their magazines. The time was now 1150. It was only then that the battle group became aware, through an Iraqi doctor, that 6 Royal Military Policemen had been trapped in the town police station on a routine visit and during the course of the battle fought by 8 Platoon, had been attacked and brutally murdered by armed Iraqis. They too had been beset by communication problems and had not been able to relay their positions. The Iraqi doctor was allowed to drive the bodies in two trips from the police station to the QRF location on the edge of town. The RMP bodies had 30 or more bullet wounds each and seeing the dead British soldiers angered the QRF who were desperate to go back into Al Majar to exact some sort of revenge, but the CO of 1 Para refused to inflame the situation more and ordered his men back to base. During the 3 hour firefight, the Iraqis are thought to have suffered over 100 casualties, but the final total has never been confirmed.

Sgt Robertson’s CGC was announced in the London Gazette dated 23rd April 2004. This was the first CGC to be awarded to a soldier serving with the Parachute Regiment. (There have been 3 earlier to Paras but they were serving with the SAS). Part of Robbo’s citation reads:

Throughout this action, Robertson displayed bravery and leadership of the highest order. He consistently placed himself in extreme danger with no concern for his personal safety. His cool-headedness and tactical skill were inspirational. Despite overwhelming odds, during a sustained firefight lasting over two hours in a built-up area, he managed to extract his entire multiple to safety without serious injury or loss of life. Subsequent intelligence reports indicated that somewhere between 50 and 100 fighters armed with AK47 rifles, 12.7mm heavy machine guns (Dushka) and rocket-propelled grenades engaged Robertson’s 13 man multiple. To Robertson and the multiple’s credit, local sources reported that the enemy was exceptionally impressed by the tactical conduct of the multiple and the accuracy of its marksmanship. 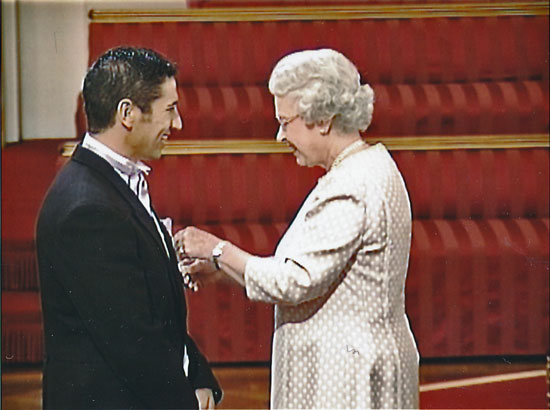 The CGC was presented by HM The Queen at Buckingham Palace on 14th October 2004, but as Robbo had already been discharged, he attended in civilian dress. The medals are to be offered by the recipient together with supporting documentation, including letters of congratulation from the Prince of Wales, Gen Sir Mike Jackson, Lt Gen Sir John Reith, CO 4 PARA, Regt Colonel, RSM 3 PARA, 11 photos including the presentation by HM The Queen, investiture programme, passing out programme, 2 maps of Al Amarah and area, copies of various testimonials and confidential reports, para beret and cap badge, gallantry medallist tie and the book Last Round by Mark Nichol, from which most of the above detail has been derived.

Are you selling a medal or militaria collection? Please contact paul.murray@warwickandwarwick.com  for a free valuation.