As a stamp expert, if I had a pound every time a client with stamps for sale joked; “you won’t find a Penny Black in there… I wish…”; I would be a rich man! It is a very popular urban myth that the Penny Black is one of the World’s rarest stamps. In truth however, with about 68 million printed and probably over one million still surviving, it can be quite a disappointment to find out that an average example can sell for as little as £20 to £30.

It is at this point I am then usually asked, “What makes a Penny Black valuable?”. This is good question, although not easy to explain quickly, as the various plates that the stamps were printed from are hard for all but a specialist to distinguish between. Cancels however, can be more easily explained.

Most postmarks used on the Penny Blacks, called ‘Maltese Cross’ cancels, were of a standard design and are almost impossible to tell apart. It is believed however that the handstamp used in Wooton-under-Edge, Gloucestershire, was deliberately scored with a file, perhaps by the postmaster himself, giving it a unique appearance. It is one of the most famous, attractive and certainly distinctive Maltese Crosses you can hope to find. And it is valuable. Stanley Gibbons price this, on a Penny Black at £6,500. 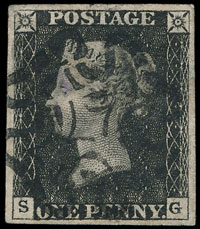 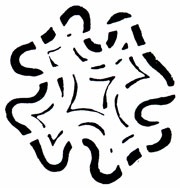 This example was discovered by the keen eye of Joseph Cottriall in an old time hoard of stamps, unnoticed by previous collectors for the last 175 years. It will be offered in our July sale with an estimate of £600. A valuable Penny Black indeed.