In our coin auctions, we often sell coins which have interesting historical backgrounds. A good example in our December coin auction was this Aethelred II “The Unready” penny. 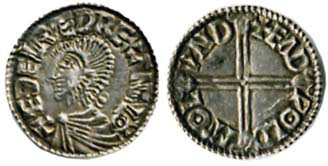 Aethelred ascended the throne on the murder of his half brother Edward the Martyr in 978 when he was about 10 years old. The murder was committed by attendants of Aelfthryth, Aethelred’s mother which made it very difficult for Aethelred to rally the nation against Viking raiders.

From 991 onwards tribute “Danegeld” was paid to the invaders and large hoards of coins have been found in Scandanavia and the Baltic regions. However after a massacre of Danish settlers, the Danes launched a series of invasions from 1003 onwards and in 1013 Aethelred was forced to flee to Normandy and was replaced by King Sweyn of Denmark. Aethelred was able to return as King on the death of Sweyn in 1014.

Aethelred’s name means “noble counsel” and his nickname “unreade” would be better translated as “Ill advised” rather than “unready”.

Are you selling a coin collection? We provide free coin valuations without obligation. Please contact richard.beale@warwickandwarwick.com or telephone 01926 499031 asking for Richard Beale if you have coins for sale.