Golf is one of the best collected areas when it comes to sports postcards and our November 16 auction contains a card, offered as a single item, which is bound to attract a lot of attention. 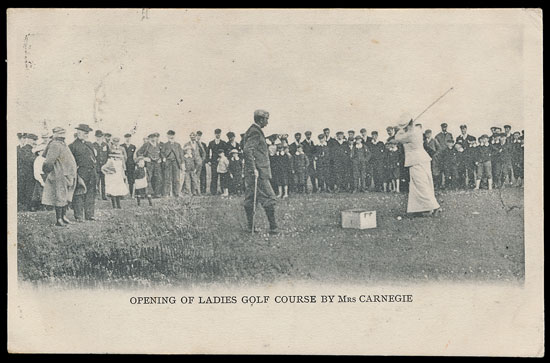 The card in question is a printed vignette card depicting the opening of the Dornoch ladies’ golf course by Mrs Louise Carnegie, the wife of the famous, Scottish-born, American steel magnate, Andrew Carnegie who became a large scale philanthropist in U.S.A. and is famous for endowing libraries in America and in the English speaking world. The Carnegies owned nearby Skibo Castle, one of the finest homes in Scotland and golf was one of Andrew Carnegie’s passions.

The ladies’ course at the Dornoch golf club was opened by Mrs Carnegie as a 12 hole course in 1899. It was extended to 18 holes in 1904, but was abandoned during the First World War and returned to nature. In 1923 a new and much longer course was opened and this was built over by a military airstrip during World War Two. For further information about the Dornoch ladies’ golf course, please follow this link.

If you have a collection of golf postcards or other sports postcards and are thinking of selling the collection, please email Colin Such with details. Warwick and Warwick value postcard collections free of charge.