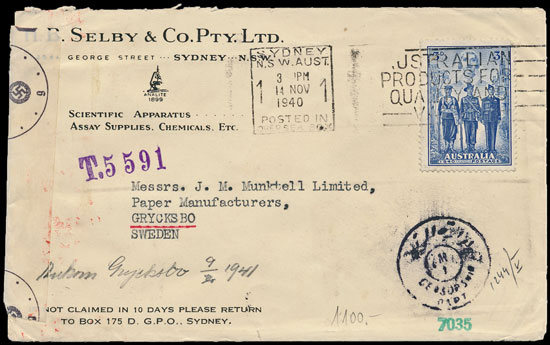 Sorting through a pile of world covers a very interesting item caught my eye.

The activities of a Scientific Apparatus company were bound to attract the interest of the German War machine, but how did they get hold of the letter?

The cover was sent by HB Selby & Co in Sydney Australia on the 14th of November 1940, to a paper manufacturer in Sweden, which, despite German threats, remained neutral through the war. Presumably, the letter was taken by boat through the Suez Canal, where it was given an Egyptian (?) Censor strike. The cover then may have continued through mainland Europe where German censors left their mark, before reaching its destination.

Was there an arrangement for mail to pass between the armed forces when en-route? How did this letter fall into the hands of the German censor?

The cover is going to be entered in our November 4th stamp auction, if you can throw any light on its unusual journey then please let us know.