The balloon flight postcards of the early years of the twentieth century are amongst the rarest and most valuable postcards collected in Britain. Although communication by balloon was used successfully during the 1870 siege of Parisin the Franco-Prussian war, the first organised balloon post with commemorative picture postcards was not arranged in this country until 1902.

The organising committee for the Beckenham coronation celebrations of that year decided to organise a balloon flight for which a specially overprinted postcard commemorating the coronation would be available, to be conveyed by balloon and sent to the addressee once the balloon had landed. Two such postcards were overprinted, one by Tuck and the other by Faulkner, with the inscription “Beckenham Celebrations. Despatched from the clouds by balloon post, coronation day, Aug 9th 1902”. Three bags of mail, or possibly 3 bundles consisting of as few as 100 cards per bundle, were conveyed and dropped from the balloon over 3 different regions of Kent, the balloon eventually landing in Calais. It is believed that fewer than 10 cards of either type have survived from this flight. The Brian Girling collection contained one of the Tuck cards and it is to be auctioned by Warwick and Warwick on September 20. It bears an estimate of £500. 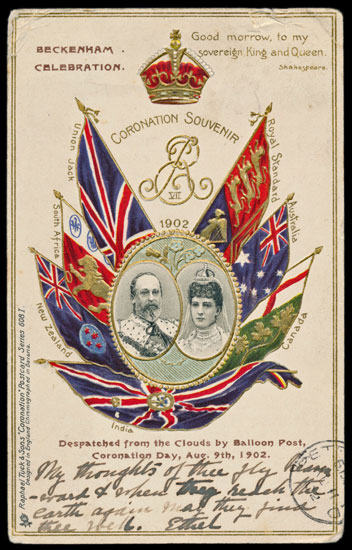 A month after this successful flight, a balloon post was organised for the benefit of the Lifeboat Saturday charity. The balloon took off from the Manchester Botanical Gardens and 4,000 cards were printed and dropped over Haslingden and Clitheroe. It is thought that as few as 4 cards have survived and one was sold in auction in 1983 for £1,675.

Lifeboat Saturday decided to repeat the flight a year later and this time the card designed for the flight had a rather inappropriate polar image. On taking off from the Botanical Gardens the balloon collided with a tree and the take off was aborted. The gondola and balloon were undamaged and they were transported to theAlexandra Palace in London from where, a week later, the balloon took off with a load of 3,200 postcards which were successfully dropped at 16 points before it landed at Ongar in Essex. In 2010 Warwick and Warwick sold 2 cards from this flight and they realised £920 each. 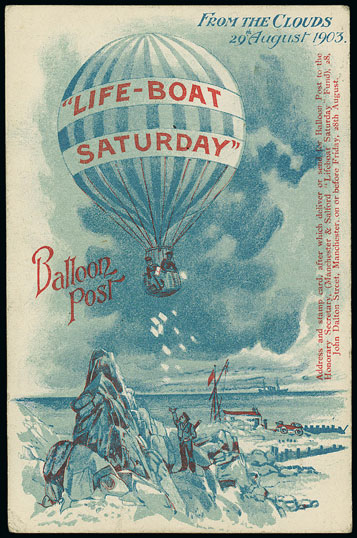 This card was produced for the Manchester Lifeboat Saturday 1903 balloon post flight.

Beckenham was the starting point for another balloon post in 1905. This time the event being commemorated was the Beckenham Flower Show. A fairly mundane postcard featuring a monochrome image of some roses was overprinted on the reverse only, and bore the inscription “Despatched from the clouds, by Balloon Post, from the Beckenham Flower Show, Wed. July 12 1905”. The balloon flew as far as Romford in Essex and cards were dropped at Chislehurst and Gravesend. As there was no inscription on the front of the card to show that it was a balloon post card, I think it is highly likely that a number of these cards remain undetected in old collections.

The fifth balloon post flight was organised in 1907 to publicise the Daily Graphic. 15,000 cards as well as a number of publicity booklets were flown from the Crystal Palace and travelled a distance of 760 miles, before the balloon crash landed in southern Sweden. A large number of the cards were recovered (as well as the 3 aviators) by a local Swedish school-master, who forwarded them to the addressees. These are the commonest of the early British balloon post cards and Warwick and Warwick sold one in 2011 for £240. 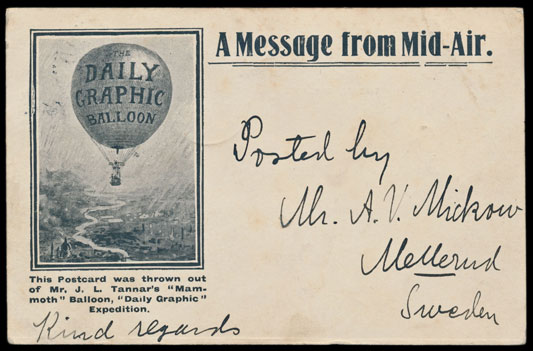 The Daily Graphic commissioned a balloon post flight to publicise the newspaper, in 1907. It took off from London and crash-landed in Sweden. 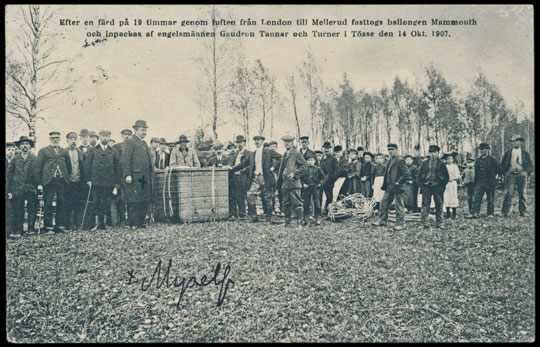 This scarce Swedish card depicts the crash landing. Schoolmaster Mr Micow, who recovered the mail, is identified with a cross and the word “myself,” the card having been sent by him to the addressee of the flown card.