Constantius II was the longest surviving of Constantine the Great’s four sons and the only one to die in his bed. He spent most of his reign fighting a protracted war against the Persians as well as very damaging civil wars against relatives and various usurpers. 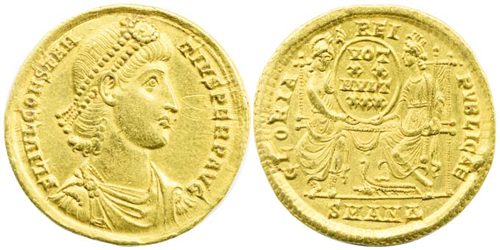 For the next 10 years the two brothers ruled jointly until Constans was usurped and killed by the distinguished soldier Magentius.

A very damaging civil war between Constantius II and Magentius ensued with enormous losses on both sides, resulting in Magentius being defeated and taking his own life.

For the final part of his reign Constantius II ruled the east with Julian II the only other direct male descendant of the house of Constantine ruling the west.

Are you selling a coin collection? We provide free coin valuations without obligation. Please contact coin expert richard.beale@warwickandwarwick.com if you have coins for sale.