We were recently asked to value and auction a superb collection of GB stamps used abroad, including India, Levant and, of particular interest, correspondence from serving soldiers in the Crimean War.

Amongst them is a letter from Assistant-Surgeon Ormsby Bowen Miller, who was serving with the 77th Foot, part of the Expeditionary Force of 10,000 men assembled in Malta in Feb 1854, where training was given in using the new Minie Rifle. 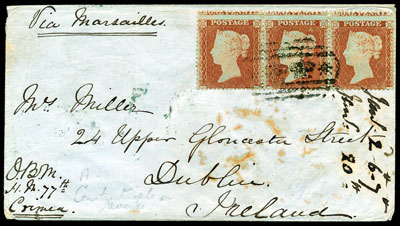 War was declared on Russia on 24th March 1854 and the first troops were shipped using a variety of craft including passenger ships from India, which were pressed into service after the passengers were removed. Miller was hastily promoted to the position of Assistant Surgeon on 28th March 1854, and it is likely that he was amongst the first to be sent to the Crimea.

The operation was an enormous undertaking with about 80,000 French & British troops and 12,000 horses being transported. Wounded from both sides at Sebastopol were taken back to hospitals in Malta, where Miss Florence Nightingale and 42 other female nurses had also stopped off on route before carrying out their now famous work in the Crimea. 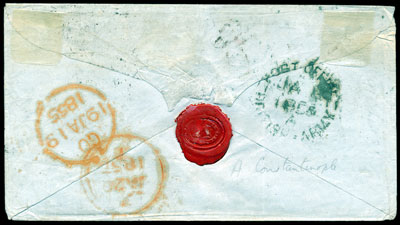 One can only imagine the work that Assistant Surgeon O B Miller had to undertake amongst the injured and dying, though he seems to have performed well in the hostilities. He was present at the Battles of The Alma and Inkermann and the siege & fall of Sebastopol. He received the Crimean Medal with 3 clasps and was awarded the Turkish 5th Class Order of Medjidieh.

Miller transferred to the 11th Hussars, and eventually rose to the position of Surgeon Major before retiring in 1875 on half-pay.

The cover is dated January 1855 and has 3 1d reds tied with a Crimea Army Field Office cancel. The cover was backstamped in Constantinople before being sent via Marseille to his family in Dublin, Ireland.

The cover will be in our August stamp auction as part of a very fine collection of GB stamps used abroad.