Postcard auctioneers, such as Warwick and Warwick, rarely offer original artwork in their auctions, due to its rarity. However the Warwick and Warwick postcard auction on March 18th contains no less than 33 watercolours by the comic and satirical artist, Cynicus, aka Martin Anderson, some of which were used as the basis for his extensive series of comic postcards.

Martin Anderson was born in Fifein 1854 and at the age of 19 he founded the St. Mungo Art Club in Glasgow. In 1880, based in Dundee, he became the first artist to be employed by a national daily newspaper in Britain. Previously papers had not been illustrated. As a freelance artist he also contributed cartoons for weekly comic magazines set up in competition with Punch. In 1891 he founded the Cynicus Publishing Co. in a shop in London, from where he successfully sold prints of his cartoons and political satires. In 1892 he published Symbols and Metaphors, a series of satirical drawings, printed and hand-tinted, issued in parts with a limit of 1000 per issue.

By the late 1890s privately printed picture postcards were permitted in Britain and Anderson realised it would be another medium to carry his prolific output of cartoons. Initially he designed court size vignette cards for the publishers Blum and Degan, but after 1902, when divided back postcards were permitted and the flood gates were opened, Anderson decided to publish his own postcards. Initially he was very successful, but business drifted away and his bankers forced him into liquidation in 1911. In 1912 Anderson set up a new publishing company in Leeds, but he was forced to close in 1914. After the First World War he set up again in Edinburgh, but his shop and his stock were destroyed in a fire in 1926. He died in poverty in 1932. 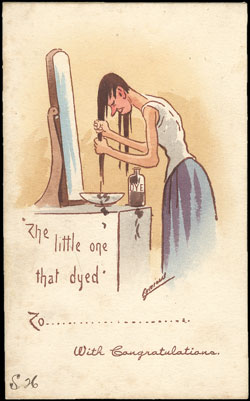 Lot 100 in the March 18 auction consists of 31 original watercolour sketches by Cynicus, each slightly larger than postcards size and 12 hand-tinted prints from Symbols and Metaphors, as well as approximately 70 issued postcards. 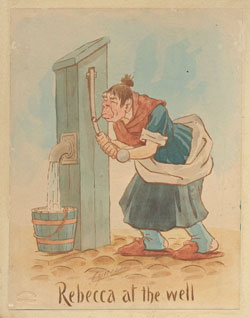 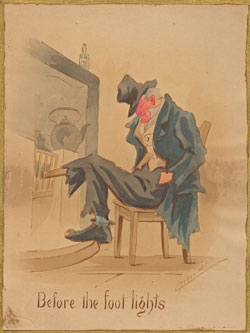 Lot 101 consists of 2 original watercolours, 6½ x 8½ inches, laid down to board, entitled Rebecca at the Well and Before the foot lights.

To view the online catalogue of the sale click here.

Warwick and Warwick are leading postcard auctioneers. If you would like your postcards valued visit our Postcard Valuations page, or email Colin Such.