We have been instructed to sell a selection of Dan Dare related toys in our 19th August 2015 Toy Auction.

Created by Frank Hampson, Dan Dare is a British science fiction comic book hero, who originally appeared in the children’s comic 'The Eagle' in the 1950s and 1960s. The stories were set in the late 1990s and depict Dan Dare as a ‘Pilot of the Future’ with his loyal companion Digby. The series was also dramatized on Radio Luxemburg in the 1950s, on BBC Radio 4 in the 1990s and as a computer generated television show in 2002 on Nicktoons UK.

Lot 248 is this Dan Dare Rocket Gun, produced by Merit. It has a spring loaded firing mechanism and comes with 2 red rockets. It is generally 'good plus to excellent' in a 'near excellent' box with packing piece. It is estimated at £250. 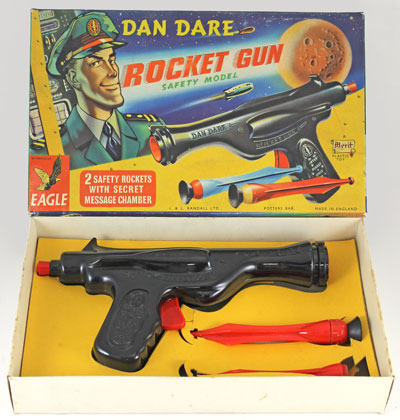 Lot 249 is this Dan Dare Cosmic Ray Gun produced by Palitoy. It is battery operated and made from red/yellow/chrome coloured plastic. It is about 'excellent' in 'good plus' box with inner card tray and is estimated at £200. 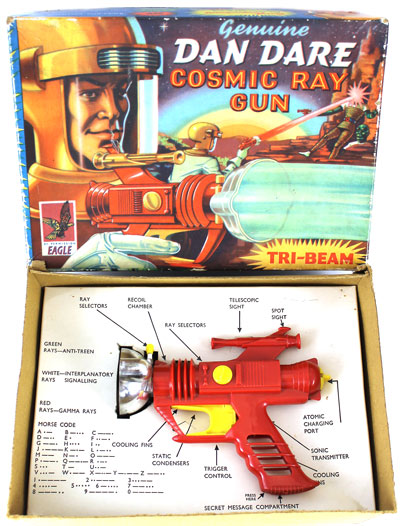 Lot 250 is this Dan Dare Space Projector Gun produced by Merit. It is battery operated, made from silver plastic and is sold complete with extra film strips. It is 'excellent plus' in 'excellent' box with internal card tray and is estimated at £150. 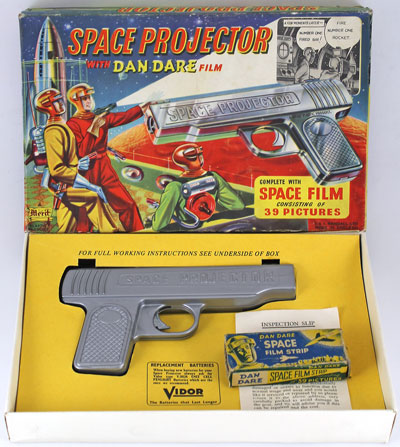 The full 15th July 2015 auction catalogue is now available on our website, or you can keep an eye on our Twitter and Facebook accounts which will include updates of our latest auction news.

Are you thinking of selling your toy collection or perhaps part of it? Would you like us to value your collection of toys and give you advice on how best to market it? Visit our toy department page for more information, or call us on 01926 499 031 and ask to speak to one of our experts.