The Bahamas archipelago has had a colourful history since being discovered by Christopher Columbus in 1492, involving slavery, pirates & adventure on the high seas, which may be why it is such an attractive area for philatelists. In our September auction we are offering approximately 70 lots of Bahamas items and collections, a large part of which come from the highly prized Len Mason collection.

Due to its position and geography the islands have been valued as a naval base for 100’s of years and this has resulted in a long Postal History since packet boats started carrying mail in the early 1700’s, though it took longer for an internal mail system to be set up.

A formal postal service was organised at the end of the 18th century and a straight line ’BAHAMAS’ handstamp was introduced for letters carried abroad. The auction includes pre-stamp covers including, what is stated to be the 2nd earliest example of the handstamp being used, on a letter from the Governor at New Providence which arrived in London in February 1804. 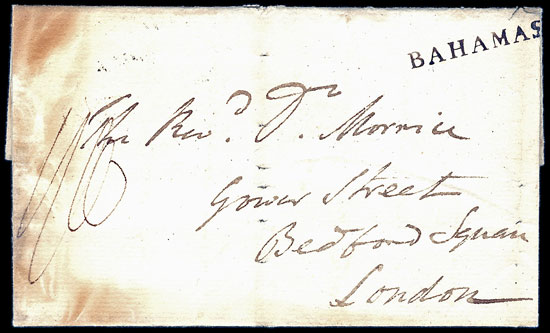 The Chalon 1d stamp was introduced in 1859 and the auction includes very rare or unique UM multiples. Amongst them is a superb block of 12 of the 1st issue on opaque paper. The block comes with a Robson Lowe certificate and has a catalogue price of £60,000. 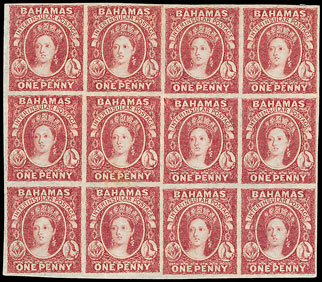 The auction also includes some exceptional Kings issues, of particular note is a specialised study of the King George VI 1942 Landfall overprint stamps, described in our catalogue as ‘the most splendid we have ever seen’ along with varieties offered as single lots, including 3 marginal blocks of 4 with one stamp showing the ‘COIUMBUS’ overprint variety, 2 are mint and 1 used. 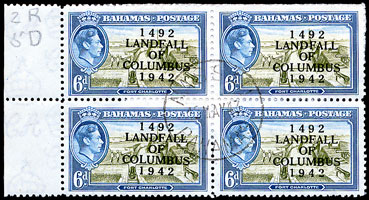 The Bahamas section concludes with a range of the 1916/17 Special Delivery overprints, including a 1916 5d with inverted overprint and also with the ‘double tree trunk’ error, said to be one of only 2 possible as only 2 sheets of the inverted overprints are known of and the error only occurred once on each sheet . 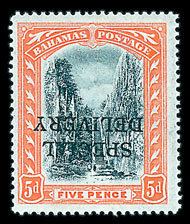 The auction catalogue can be viewed on our website and the auction is being held on the 2nd of September at 12 noon.