A fantastic collection of American Colonial and Revolutionary banknotes dating from the 18th century are to be offered in our 15th June 2016 auction. Assembled by a single collector, lots 261 to 288 are from various states.

Originally the ‘colonies’ used either British or Spanish/ Portuguese currency for their everyday transaction but with the beginnings of dissatisfaction with foreign rule they began to issue their own paper money in the late 1600s. This continued with the start of the American Revolution as they proved easy to use under military circumstances, despite the British attempt to undermine the value of the currency.

The collection of banknotes offered in this auction are all from this colonial/ revolutionary period and are all extremely difficult to find in such good condition.

Some highlights include this Georgia 1777 fifteen dollars, which is graded as nearly extremely fine and estimated at £1,800. 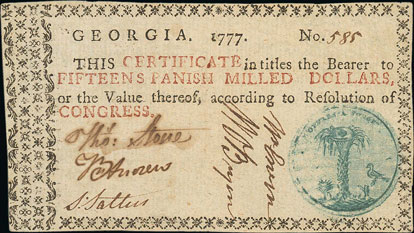 This extremely scarce New Hampshire 1775 (20 June) six shillings, despite being graded as poor, is estimated at £1,500.

From Pennsylvania, this 1756 (1 January) twenty shillings, graded as very fine and printed by Benjamin Franklin, is estimated at £1,000. 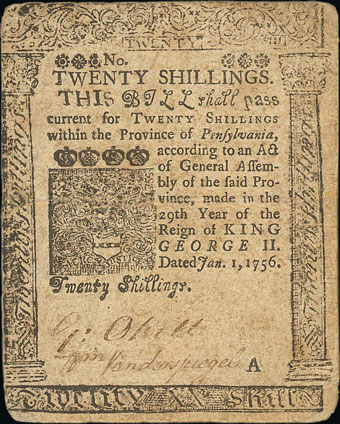 And this Virginian 1759 (5 April) 100 shillings, graded as fair and signed by Peyton Randolph, the 1st and 3rd President of the Continental Congress, is estimated at £1,200. 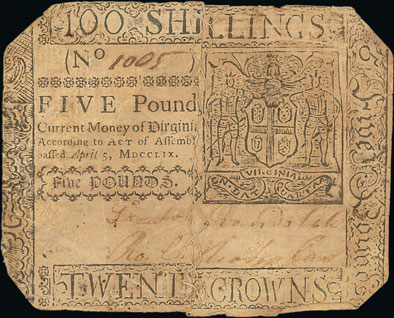 The full 15th June 2016 auction catalogue is available to view on our website which also has details on how you can place bids. Our Twitter and Facebook accounts also include updates of all our latest auction news.