How much is a "simple" WW1 British War Medal and Victory Medal worth?

How much is a “simple” WW1 British War Medal and Victory Medal worth? 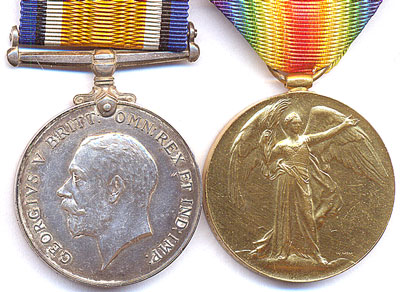 With over 8 million British and Commonwealth men and women serving in World War 1 and over 5 million of these serving on the Western Front, there are literally millions of British War Medal and Victory Medals pairs in collections and with families in this country and around the world. So how much is this “simple” medal combination worth?

There are a number of factors to be taken into consideration, the obvious ones are was the recipient male or female, their rank, their regiment or corps, did they receive a gallantry award, were they killed or wounded in a famous battle or action and the list goes on. One of the main consideration with many medal collectors is “is there a story to be found about the man behind the medals” and this research helps keep the memory alive of a long since departed veteran.

A “simple” such pair of medals was consigned in our 10th December medal auction and after some investigation an unusual story was found. The lot in question is Lot 69 and is a pair named to 103484 2 A.M. H. Yates R.A.F.

Harold Yates was born in Liverpool on 24th March 1890 and enlisted in the Royal Flying Corps on 9th October 1917 being employed as a carpenter. With the aircraft of the day being of wood construction, it is easy to see the line of work he would have been employed on.

A check of the Commonwealth War Graves Commission site shows that Harold Yates died serving as an Air Mechanic 3rd Class with the 1st Aeroplane Supply Depot Repair Park on 10th November 1918 and is buried in Terlincthun British Cemetery, Wimille. With Harold holding the rank of Airman, he was unlikely to be involved in flying duties and being stationed so far behind the lines with the 1st Aeroplane Supply Depot at Marquise, near Boulogne was unlikely to be involved in enemy action. The first and most obvious thought to his cause of death would be some killer disease such as typhoid or dysentery. In 1918 alone, over a quarter of a million service personnel were evacuated to the UK from the Western Front suffering from an illness of one form or another.

This story is not so obvious however, because on the night of 23rd/24th September 1918, the Aeroplane Supply Depot was attacked by 13 German bombers in a devastating raid, during which 43 men were killed and 124 wounded and 26 planes were destroyed and 73 damaged on the ground. A search of his RAF service papers confirm Harold was one of the wounded, suffering wounds to his legs, thigh and hand and he was admitted to 53 General Hospital nearby. Unfortunately Harold died from his wounds and is 1 of 3677 service personnel buried in Terlincthun British Cemetery. The reason for some many casualties buried so far behind the lines, is that a number of hospitals were located around the channel ports attending to patients prior to evacuation back to the UK and clearly they did not all make it home.

The estimate on this lot was £120 but the interesting story ensured the lot sold for £189. What are your medals worth?

If you are thinking of selling your medals, or simply want to know what they may be worth, please e-mail me at paul.murray@warwickandwarwick.com for a free valuation.