Following the signing of the Anglo-Irish agreement an Irish Provisional Government assumed power in 1922. Lacking their own stamps, the decision was made as an interim measure, to overprint existing British stamps until the Irish Free State were able to introduce their own definitive stamps in December 1922. During this period 3 different printers were instructed to carry out the overprinting, and, as is often the case, the combination of printers, types, techniques and errors created a new area of interest for philatelists to enjoy.

In our April auction we are offering a superb collection of GB overprints from 1922 to 35 all of which are UM, including many of the rarer varieties as listed in the authoritative MacDonnell Whyte/Feldman catalogue. Most have been issued with certificates of authenticity from Richter.

The errors include major re-entries, inverted overprints, plate varieties, missing accents, ‘flat accent’, circumflex accent, ‘PENCF’ errors and many more individually lotted. The collection will be included in our April 6th Auction in over 80 lots. Catalogue descriptions & scans of the lots will be available on our website before the auction or call us for a complimentary printed catalogue. 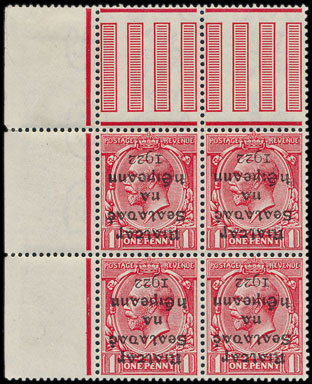