While Italy cannot deliver on the pitch, a lot in our December stamp auction suggests they may well be able to deliver off it.

The recent qualification play offs for the 2018 World Cup in Russia saw Italy fail to qualify for the first time since 1958. Their one nil defeat to Sweden will see them not only miss out on the tournament itself, but also be absent from the collectable memorabilia that comes with a place at the World Cup. However, while preparing a superb Italian collection for auction I was reminded of happier times for Italian football. 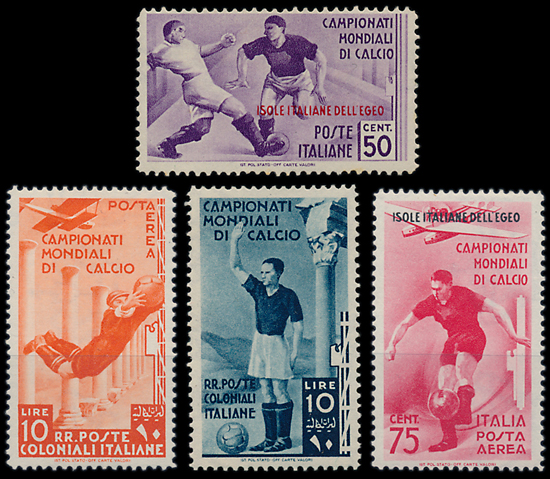 Lot 434 in our upcoming December sale features two sets of stamps issued in the Italian colonies from 1934 celebrating one of the better periods in Italian calcio history. They commemorate Italy as hosts of the second ever World Cup, which they went on to win. The talismanic figure of Giuseppe Meazza - widely considered the best player of his generation – was instrumental in leading Italy to defeat Czechoslovakia 2-1 in the final after extra time. The first set comprises nine stamps, issued in the Dodecanese islands, with six of the denominations featuring football players and three of the airmail denominations depicting planes flying above stadiums in Turin, Florence, and Bologna. A similar set was also issued for general use in the Italian colonies this time with twelve values. Both of the sets we have on sale are in Mint condition which attract a high catalogue value, though in Fine Used condition they are even more desirable.

Although it is safe to say a similar set will not be commissioned in 2018, this lot offers a chance to relive more positive memories of Italian football.

You can view the catalogue for our upcoming auction on our website where you can also find out how you can place bids. Visit our Facebook and Twitter accounts for updates on all our auction news.