Queen Victoria died in January 1901, for 60 years her face had been on every stamp issued in the UK and most stamps issued in the British Empire. Seemingly she had been such a dominating presence that little thought had been given to the design of stamps for her successor, King Edward VII, who had been waiting to take on his new role for a considerable time.

Examples of the Jubilee background used in the essays

Officials from Post Office consulted with the printers De La Rue and it was decided to prepare a mock-up of various new designs for consideration by pasting a cut-out picture of the new King onto the backgrounds of the current ‘Jubilee’ stamps. Four sets of mock-ups were made, for values from Halfpenny to One Shilling with the King facing ¼ & ¾ in both directions, with other small design changes incorporated. 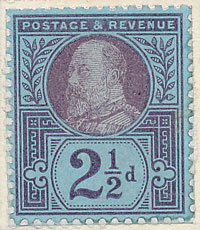 The ‘paste-up’ essay prepared for approval

The essays were sent to the King for his approval but apparently none of them were to his liking, as the adopted portrait was a full profile facing left. Controversially, the artist chosen to prepare the portrait was an Austrian, Emile Fuchs, for whom the King gave a special sitting so that two head sizes of the design could be prepared. The choice of a foreign artist aroused some public criticism, typified by a verse that was circulated-

Thus, if you please, Herr Fuchs they choose,

An Austrian Sculptor he

To draw our English King—ph, what An excellent decree!

The design selected by the King was printed by De La Rue and the first stamps were issued on the 1st of January 1902.

The Fuchs design approved for use on ‘Jubilee’ backgrounds

We are offering one of the original ‘paste-up’ essay stamps in our stamp auction; the 2½d with the Kings head facing ¼ to the left, mounted on card. The stamp comes with a 1975 BPA photo certificate and is catalogued as from SG ‘Paste-up’ Series B with a price of £11,000 each stamp.

Specialist philatelic collectors often seek a unique item that will enhance their collection, though this is a difficult thing to define. However, in this case it can reasonably be argued that this is a unique philatelic item created at a seminal period in the history of British postage stamps.