You may recall back in Feb 2013 we reported a new discovery, 60 years after it was issued, of a reversed watermark error on a Malta 10/-. Now listed as SG 105x, it is always a thrill to find an error nobody has ever seen before.

Well this month I have to report not one, but two similar “new discoveries” of previously unrecorded watermark errors, spotted by our eagle-eyed valuers in the stamp department.

The first is from St Christopher on the 1884 perf 14 issue 1d carmine rose. Issued with watermark CA it is already known with the watermark inverted and the watermark reversed. Now we have found an example with the watermark sideways. Fine used with an “A12” barred oval cancel, hopefully to be listed under SG 13 in a future catalogue. 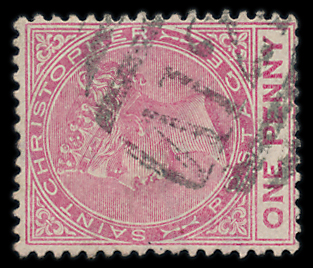 So if that wasn’t enough, imagine my surprise to examine a Mauritius stamp, SG 95, the 1880 watermark CC 13c slate Fine used with a no 14 in circles cancel. A good stamp anyway, priced by SG at £325, I had a close look to make sure there were no thins or faults, to discover the watermark is inverted. 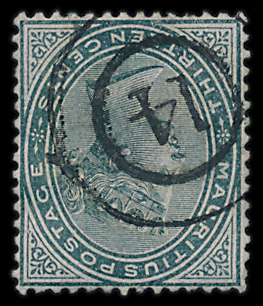 A little like waiting for a bus to come, I suspect it might be some while before another undiscovered error comes to light again, but two together…wow what a month.