Warwick and Warwick has been instructed to sell by auction a collection of rare balloon-post cards from G.B. andEurope. The collection includes one of the rarest and most desirable of all the postcards ever issued in this country, namely the Lifeboat Saturday balloon-flown postcard of 1903. The collection consists of 26 cards and because they are all balloon-flown and examples of early airmails, it has been decided to offer them in the philatelic auction which we are holding on January 7.

In 1902 the public were invited to purchase specially printed postcards depicting a hot air balloon bearing the banner Lifeboat Saturday. 4,000 such cards were sold for the flight from Manchester Botanical Gardens but it would seem that only two have survived. One sold in auction in 1983 for £1,675. The flight had been a good fundraiser and it was decided to repeat the exercise a year later, on August 29th 1903, with a different postcard. This time 3,200 were printed and sold for 3d. However at the take-off the balloon was damaged and the flight had to be aborted. It was decided to try again and on September 5th the balloon took off successfully from AlexandraPalace in north London and landed at Ongar in Essex, from where the postcards were forwarded to their addressees. In 2010 Warwick and Warwick sold two of these flown postcards at £920 each. 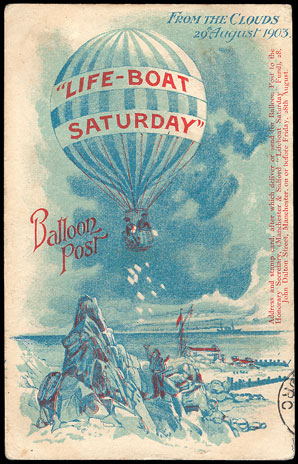 The front of the 1903 Lifeboat Saturday flown card which will be offered in the Warwick and Warwick philatelic auction on January 7. The message on the reverse states “Who is this from? Santa Claus it must be? Mind you don’t vex him or he won’t put anything in your stocking at Xmas.” It was found near Ongar and posted to the addressee, Miss M.E. Raybould of Netherton, near Dudley.

Less rare, but nevertheless still desirable is another GB flown balloon card, dispatched in 1907 in order to publicise the “Daily Graphic”. The coal-gas filled balloon, named Mammoth, took off from Crystal Palace, London at 5 pm on October 12th 1907, with a crew of three and 15,000 postcards as well as publicity booklets, which the crew jettisoned in place of sand. The balloon drifted for 20 hours and 30 minutes over the North Sea and Denmark, eventually crash landing near Mellerud, in southern Sweden. The crew escaped unhurt but the balloon careered on for a further 30 miles, scattering its load of postcards over a considerable area. Some were recovered over a period of several weeks by the Mellerud schoolmaster, Mr Mickow, who had played host to the aviators when they arrived at his door after the balloon’s crash landing. Two of these flown cards, returned from Sweden, feature in the Warwick and Warwick January 7 auction. 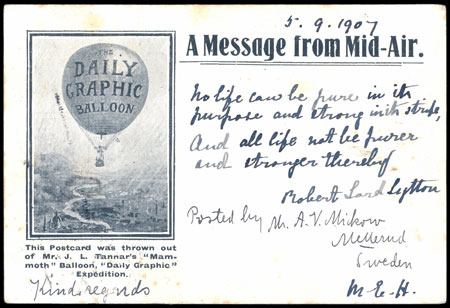 One of the two Daily Graphic balloon-flown cards being offered by Warwick and Warwick on January 7.  It is endorsed “Posted by Mr. A.V. Mickow,Mellerud,Sweden. Kind regards”. It was mailed without stamps and the addressee was required to pay 2d postage due.

Other flown balloon cards in the collection are from Germany and Switzerland, many being from balloons competing in the Gordon Bennett balloon races. The catalogue of the auction will be posted on the website approximately 3 weeks before the sale. It will not be sent automatically to subscribers to our postcard sale catalogues.