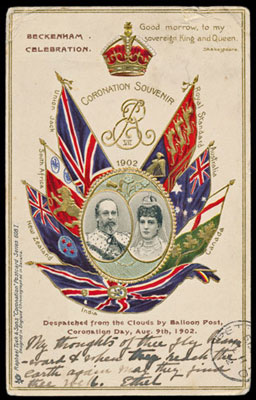 Part 4 of the collection formed by the late Brian Girling includes one of the rarest balloon post postcards known in this country. The organising committee for the Beckenham 1902 coronation celebrations decided to organise a balloon flight for which a specially overprinted postcard commemorating the coronation would be available, to be conveyed by balloon and sent to the addressee once the balloon had landed. Two such postcards were overprinted, one by Tuck and the other by Faulkner, with the inscription “Beckenham Celebrations. Despatched from the clouds by balloon post, coronation day, Aug 9th 1902”. Three bags of mail, or possibly 3 bundles consisting of as few as 100 cards per bundle, were conveyed and dropped from the balloon over 3 different regions ofKent, the balloon eventually landing inCalais. It is believed that fewer than 10 cards of either type have survived from this flight. The Brian Girling collection contained one of the Tuck cards and it is to be auctioned by Warwick and Warwick on September 20. It bears an estimate of £500.