Valuing covers collections can be rewarding because of the occasional rare and interesting items that surface which encapsulate a historical event.

One such example is a 1944 cover from the Italian Naval Base in Bordeaux bearing Italian stamps overprinted by Mussolini’s Social Republic supporters which was sent to us by a regular vendor for valuation.

The submarine base at Bordeaux, called BETASOM (an acronym from Beta, for Bordeaux and the Italian for submarine, sommergibile), commenced operations in August 1940, with an initial fleet of 6 submarines patrolling an area of the Atlantic with mixed success.

After the Italian armistice in September 1943 the base was seized by the German forces and a number of the Italian personnel chose to throw in their lot with the Nazis rather than laying down their arms. The Italian stamps were then overprinted to show their support for Mussolini.

The base continued operations until August 1944 when the remaining German forces fled shortly before Allied forces occupied Bordeaux, they were later captured by US troops as they attempted to walk back to Germany.

Covers from the naval base are scarce and those bearing the very rare 5c are hardly ever seen, which is why that stamp alone is listed in Yvert with a price of €6,100 used. The cover is being offered in our March stamp auction with an estimate of £500. 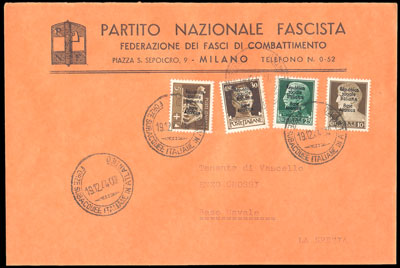