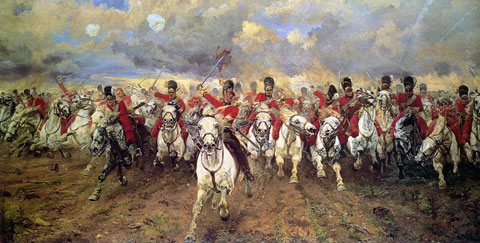 The year 2015 is the 200th Anniversary of the Battle of Waterloo and the end of Napoleon Bonaparte’s rule of France. The most iconic British unit for this pivotal battle in European history is the Royal Scots Greys. The 1815 Waterloo Medal named to George Willett, 2nd or R.N. Brit Reg Drag (the full title unit was 2nd Royal North British Regiment of Dragoons) was offered for sale in the Warwick and Warwick 22nd April medal and militaria auction, realising £6,195.

George Willett was wounded during the famous charge of the Royal Scots Greys at the Battle of Waterloo. During the early afternoon of the battle, a column of French infantry was threatening the centre of the British line and pressing Pack’s infantry brigade. The Commanding Officer, Lieutenant Colonel Hamilton on his initiative ordered the Scots Greys forward and this movement restored the confidence and rallied the wavering British infantry. The Scots Greys then fell upon the French infantry column and putting it to flight with Sergeant Charles Ewart capturing the Eagle Standard of the 45th Regiment. The Scots Greys became disorganised after routing the column and instead of reforming, they continued their advance deeper into the French lines. The next French infantry they encountered had time to form squares and scythed the Scots Greys down with musket fire. Some of them moved on to attack some French artillery, but their horses were now exhausted and they were no longer a cohesive unit. They were counter charged by French lancers and cuirassiers and the Scots Greys and the rest of the Union Brigade were harried back to the British lines suffering heavy casualties. It was during this counter charge by the French Lancers that George Willett was wounded, receiving a lance wound in his back and was further injured by his horse falling on him. At Waterloo the Scots Greys suffered 104 killed and 97 wounded and lost 228 horses.

George Willett was born in Nantwich circa 1893, he enlisted on the 31st July 1811 and was discharged on the 24th June 1839 at Ballincollig in Ireland having served 27 years, 309 days. He also received a pension uplift of an additional 2 years for his service at Waterloo. He sadly did not live long to enjoy his retirement, where he appears to have been employed as the Master Tailor to the regiment while they were stationed at Ballincollig. He died on 28th January 1840 and is buried in the British Military Graveyard, Ballincollig, where his headstone still remains. A scarce casualty medal to the most iconic unit at Waterloo.