Perhaps it comes from having been a boy scout (with the woggle to prove it), but I have always found the Siege of Mafeking stamps fascinating.

For 217 days the poorly trained forces of Robert Baden-Powell resisted the much larger Boer army to hold Mafeking until relief troops arrived on the 17th May 1900.

Baden-Powell (later Lord) returned to Britain a hero and later set up the Scout movement, partly based on the ‘good deeds’ of the members of the Cadet Corps who delivered much of the mail so that all adult men could be conscripted. 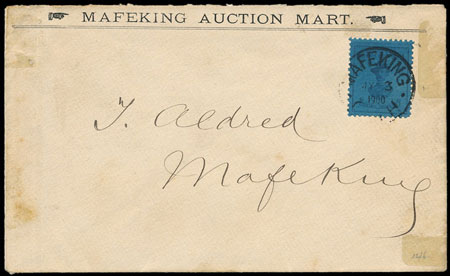 We have a Mafeking commercial cover dated 3rd May 1900 and bearing a 3d stamp in our 3rd June stamp auction. This would have been near the climax of the siege and one wonders about the conditions in the town at the time the letter was delivered.

These stamps are desirable for many collectors, British Colonial, Africa, Scouting, etc, so the cover is likely to be very popular.