States of Guernsey Overprint Banknotes in our 17th February 2016 Auction

The occupation of the Channel Islands by Germany during World War II proved a devastating blow for the allies and its inhabitants but also posed numerous day-to-day practical problems. The maintenance of currency was important for the island population to continue buying everyday goods in order to try to live as normal a life as possible.

When the islands were initially occupied, German money was made legal tender, resulting in British and Channel Island currency disappearing ‘under the floorboards’. Banknotes and coins therefore gradually began to ‘dry up’ and because of this shortage the German authorities agreed in 1941 to the issue of small denomination ‘Channel Island’ banknotes. These issues were subject to the island authorities withdrawing £5,000 worth of Bank of England £1 notes and handing the ‘soiled’ notes over to the Germans. These soiled notes were subsequently overprinted on the front and reverse with ‘Withdrawn from Circulation September 18th, 1941’ or Withdrawn from Circulation November 10th, 1941.

After the liberation of the Channel Islands in 1945, £2,000 worth of these banknotes was discovered in Jersey and subsequently returned to the Bank of England. A second discovery, in the early 1980s, of the balance of these notes was made, with most of them sold to collectors.

There are two of these States of Guernsey Overprinted banknotes offered for sale in our 17th February 2016 auction: - 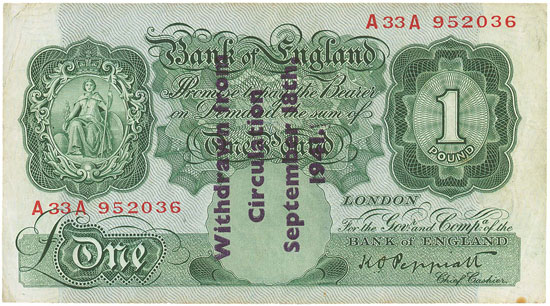 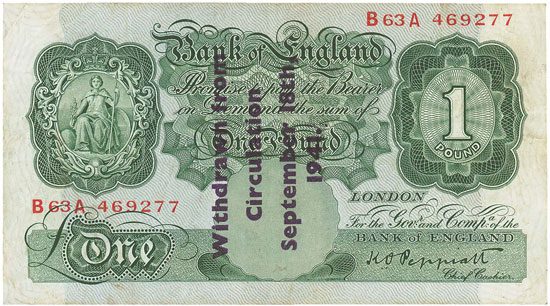 The full 17th February 2016 auction catalogue is available to view on our website which also has details on how you can place bids. Our Twitter and Facebook accounts also include updates of all our latest auction news.