We have been instructed to sell a selection of rare hammered gold coins in our in our 19th August 2015 Coin Auction. They include nobles, quarter nobles, a half ryal, an angel and a unite.

The Noble was the first English gold coin produced in quantity with minting beginning as early as 1344, during the reign of Edward III. Being such a high denomination of coin it saw little circulation, with the lower value half and quarter nobles produced in greater quantity. 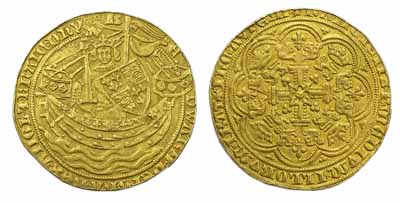 Lot 418 is a Richard II noble. From the Calais mint the obverse shows the King standing in a ship, with a sword and shield. A flag is shown on the stern of the ship. On the reverse there is a letter R in centre of the ornate cross. It is graded as 'good very fine' and is estimated at £7,000. 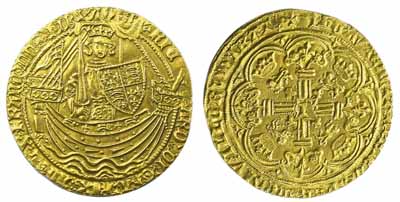 The angel was introduced in 1465 during the reign of Edward IV. Its name is a reference to the image on the obverse, which shows the archangel Michael slaying a dragon. It replaced the noble and was also known as the angel-noble.

Lot 422 is this Edward IV angel. It was minted in London and has a mintmark of heraldic cinquefoil. It is graded as 'about very fine' and has an estimate of £2,000.

The gold unite first went into production during the reign of James I and is named after the legend on the coin showing the King’s intention of uniting the kingdoms of England and Scotland. The reverse legend translates as ‘I will make them one nation’.

Lot 426 is this Charles I unite, second bust with mintmark castle. It is graded as 'good fine' and is estimated at £1,500.

The full 19th August 2015 auction catalogue is now available on our website, and you can also keep an eye on our Twitter and Facebook accounts which will include updates of our latest auction news.

Are you thinking of selling your coin or token collection or perhaps part of it? Would you like us to value your collection of coins and give you advice on how best to market it? Visit our coin department page for more information, or call us on 01926 499 031 and ask to speak to one of our experts.