The 1840 Penny Black and a Red Herring

The introduction of the 1d black postage stamp in 1840 was a huge achievement, simplifying an overly complicated postal system, but sometimes success can bring its own new set of problems and the Post Office became increasingly concerned about the re-use of stamps that had previously been used despite them being marked with an ‘obliterating stamp’ which quickly became known as a Maltese Cross.

The thrifty & ingenious Victorians quickly came up with a variety of ways to re-use stamps including cleaning the cancel; combining unmarked parts of stamps; coating the stamp with various substances before posting, and so on. The efforts of the GPO were not helped by the resilience of the black ink used in printing the stamps and also the variable quality of the red ink used to obliterate them.

The GPO had originally chosen red ink to obliterate the stamps and sent a recipe to Postmasters so they could concoct the ink locally. This included Printers Ink, Linseed Oil & ‘droppings of sweet oil’ (Olive Oil). Inevitably this resulted in a wide range of colours & quality of ink.

After carrying out trials of different coloured stamps & cancellations the decision was made to replace the Penny Black with a red stamp and introduce black ink to obliterate them, this to be supplied by the Post Office to ensure consistency. A notice was sent to Postmasters telling them to ‘immediately commence using the Black Composition’ shortly before the Penny Red was introduced in February 1841. 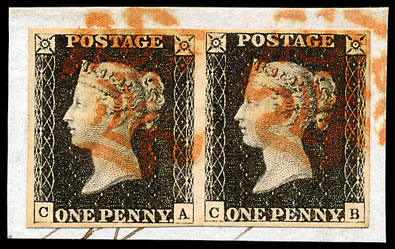 Unfortunately, or fortunately for collectors, this resulted in a complex mix of colours as some Postmasters continued to use their red ink and also exhaust their stocks of Penny Blacks before adopting the new instructions. 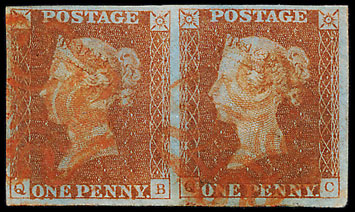 Our 7th October auction includes an 1841 Penny Red pair Plate 16 with red MC, cancelled contrary to instructions and therefore very desirable for collectors. The pair is estimated at £900 and comes with a BPA certificate. Examples of Penny Blacks from the auction are also illustrated here showing the wide variety of ‘obliterations’ available.