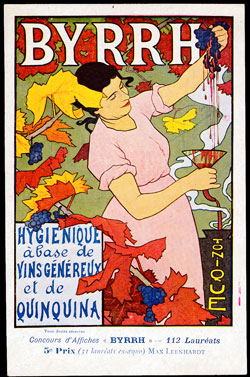 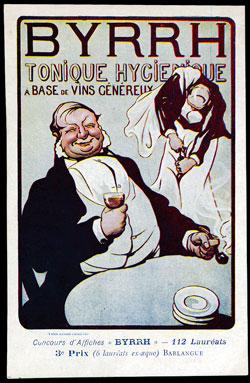 Left: Delightful and colourful poster by Max Leinhardt, which won a 5th prize.

Right: A 3rd prize was awarded to Barlangue for this design.

I would collect them if only I could pronounce the word when I attended postcard fairs. This was a comment one of Warwick and Warwick’s postcard customers made to me when he attended a recent auction. The cards in question were those produced in Edwardian times to advertise the French wine drink Byrrh. Although my knowledge of French is reasonable I had to investigate further before I was confident enough to tell him that the French pronunciation of the word is similar to the English “beer”. This perhaps constituted one of the reasons why the brand never really caught on in the English speaking world. I can imagine the conversation in a British pub.

“No, the French drink that comes in a wine glass”

“We’ve got Stella and that comes in fancy glasses, but I thought that was Belgian”.

The brothers Violet invented the drink in 1866, in Thuir, in the Pyrenées-Orientales département of France, close to Perpignan, where the factory still produces the wine-based aperitif. It is made from grapes from the Roussillon area, fortified with alcohol and given its flavour by herbs, principally quinine. 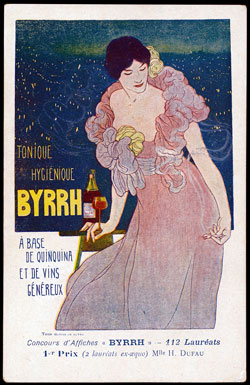 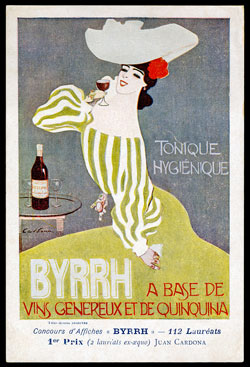 Right: The other 1st prize winner was Juan Cardona with this design.

In 1903 a competition was organised by the company to design advertising posters for the drink and a total of 1900 entries were received. The first prize was 2000 francs (around £5,000 in today’s values), the second 1500 francs, the third 1000 francs and the fourth 500 francs. Several of the entrants were established commercial artists such as Maurice Denis and Raphael Kirchner. However the famous Czech artist, Alphonse Mucha, well known for poster and postcards, did not take part. The joint winners of the competition were Juan Cardona and Clémentine Hélène Dufau. Two 2nd places were awarded, six 3rd, five 4th, thirty-one 5th and sixty-five 6th. Many of the submitted designs were printed as a series of 113 postcards, with the name of the artist and with its position gained in the competition. The cards are most attractive and many have artistic art nouveau images. The rules of the competition stated that the design had to include the words “tonique”, “hygiénique” and “à base de vins genéreux et quinquina”.

In 2013, in recognition of the 110th anniversary of the 1903 competition, a further competition was organised by the company, now a subsidiary of the Pernod Ricard brand. The prizes on offer were similar to those of 1903, but denominated in euros rather than French francs, the top prize being 2000 euros. It is a sign of the times that the 2013 entries were not permitted to use the French words “tonique” and “hygiéniqe” that were a pre-requisite of the 1903 competition because they lack accuracy. The only phrase which was compulsory was one relating to drinking responsibly. 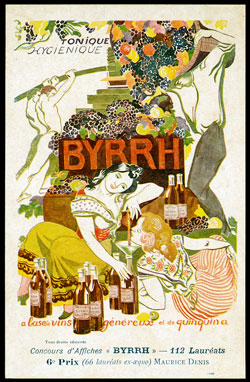 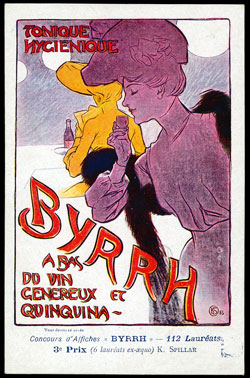 Left: Maurice Denis was one of the more renowned artists submitting designs, this one earning him a 6th prize.