The Cayman Islands, not just a tax haven.

The Cayman Islands have been in the news recently following the release of the ‘Paradise Papers’. Better known in recent years as a tax haven for the wealthy to secrete their earnings, many philatelists will be aware that the Islands have an interesting postal history and are widely collected.

Our December 6th stamp auction includes a very fine collection of stamps from the early years of Cayman stamps.

The Islands first stamps as a dependency of Jamaica were issued in 1900 with Crown CA watermark & then in 1905 with Multi Crown watermark, but the limited numbers issued resulted in a shortage of low values. As a short term measure the stock of high denomination stamps were handstamped at Kingston & Georgetown until a new supply of stamps arrived. A very fine example of a 1907 Georgetown ½d on 5s with top margin & plate number is in the auction. 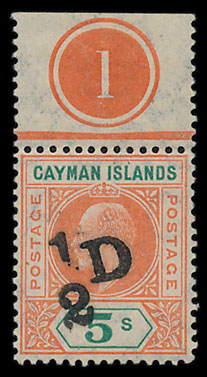 In 1917, as with a number of Colonies, stamps were surcharged to raise extra funds for the War Effort. The first supply of surcharged stamps arrived from Kingston and sold out on the first day of use. Replacement supplies were ordered and printed by De La Rue who decided to change the overprint design after just a few sheets were produced as it did not adequately obliterate the face value. Accidentally, a small number of the faulty sheets were sent with the order and sold to the public. The auction includes an example of the first DLR overprint 1½d on 2½d. 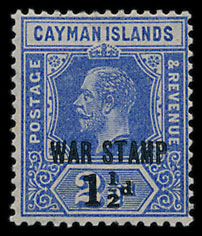 In 1932 the islands issued the first commemorative stamps to celebrate their Centenary of self-administration. The auction includes a Centenary set UM with perfin ‘SPECIMEN’, also a UM postal set with lower values in blocks of 4.

For the first few years stamps were not widely available in more remote areas so various special handstamps were used on stampless envelopes that were passed to a ‘waggoner’ who travelled through each district. A very rare example of the ‘East End’ cachet on an OHMS letter, one of only 40 covers known with this handstamp, is in the auction. 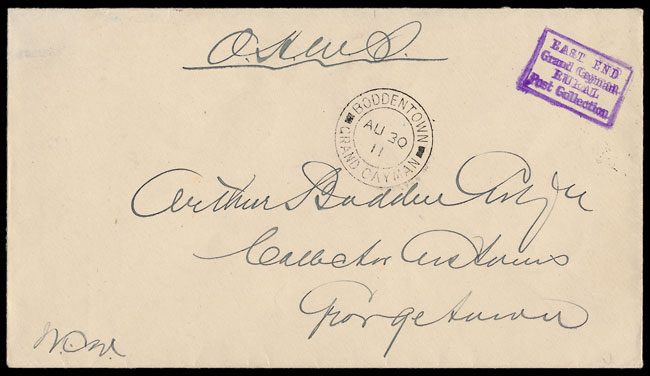 There are also collections of covers and other items associated with the Islands.

The full catalogue can be viewed online and viewing is available before the auction.