The Chronological Collection of Karl Jaeger

As an auctioneer of postcards I see a vast number of desirable cards and class it as an honour and a privilege to be in such a position. I have the opportunity to examine and describe the cards without having to purchase them. I am indeed most fortunate to be able to view an eclectic and valuable range of cards every month, without there being any necessary link between them. One moment I will be lotting wonderful art nouveau designs, the next I will be examining social history cards of the industrial Midlands. The postcard world is my oyster! The vast majority of collectors limit themselves to one or two subjects or topographical cards of a specific area. This is a natural thing to do. However I often hear someone saying how much they admire a particular card and regret that it is beyond their collecting area. The well-known postcard collector Karl Jaeger, when forming his collection, was never constrained in such a way, as he has formed a chronological world collection and purchased whatever card attracted him. He has then filed the card chronologically, after investigating the event depicted. This world chronological collection is rich in social history cards and fills 25 volumes. Karl has decided that the time has come to sell the collection and it will be vended, suitably broken down, in the Warwick and Warwick auction on November 18. It constitutes a record of world events, history, politics and social history, as depicted on postcards since their invention in 1869 to the 1980s and I have selected a few of the cards which particularly appeal to me. 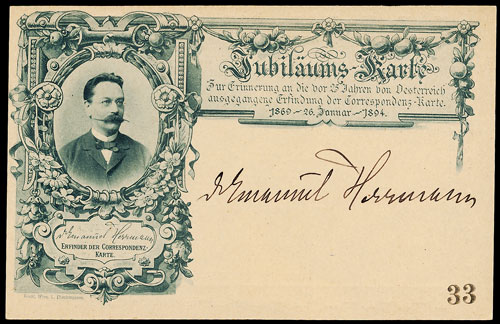 Austria invented the postal stationery card on October 1st 1869 and Britain followed suit exactly a year later. This postal stationery card was published by Austria in 1894 and honours Emanuel Herrmann, the inventor of the postcard, celebrating its silver jubilee. An added bonus is the fact that the card is autographed by Herrmann. 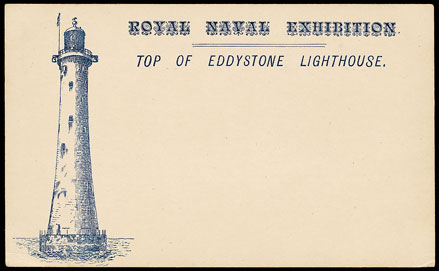 The Eddystone lighthouse was viewed as an engineering masterpiece by the Victorians and it was decided to build a full scale replica of it for the International Exhibition of Navigation, Travelling, Commerce and Manufacture, held at Liverpool in 1886. The Victorians and Edwardians were very keen on exhibitions and pageants and once the Liverpool 1886 exhibition had ended, a further exhibition was planned to celebrate the Jubilee of Queen Victoria, in 1887. The replica lighthouse was taken down again at the end of the Jubilee exhibition and re-erected for the 1891 Royal Naval Exhibition, held at Chelsea Hospital. It was a great attraction and a pictorial postal stationery card was produced by the Post Office commemorating the exhibition and depicting the lighthouse on the reverse. Entrance to the lighthouse cost 6d and the postcard was on sale to the public at 1d. It could be posted at the top of the lighthouse where it received a special postmark in either violet or blue. 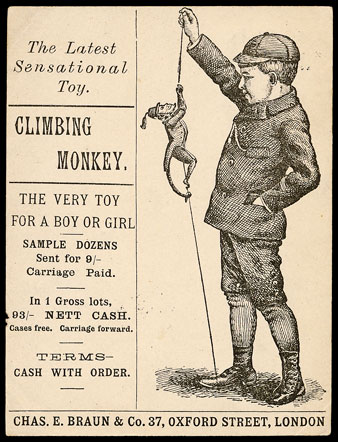 Privately published picture postcards were permitted by the British Post Office from September 1st 1894, but cards used before 1897 are rare. This card advertising a London toy wholesaler, depicting a boy with a toy string-climbing monkey, was used with a 1d lilac and posted from London to Germany on March 30th 1895. 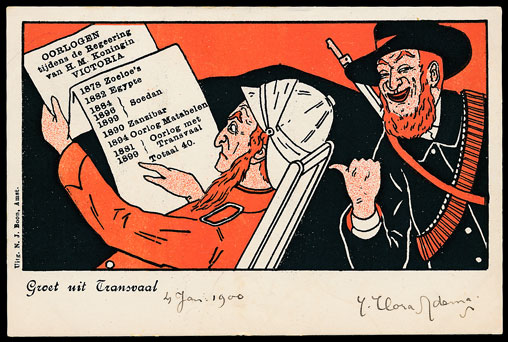 The Second Anglo-Boer War of 1899 – 1902 was the catalyst for a lot of continental political satire postcards. This card is Dutch and depicts a British officer staring in dismay at a list of battles fought in recent years by Queen Victoria’s army, whilst a Boer looks on mockingly. It was used internally in Holland in 1900. 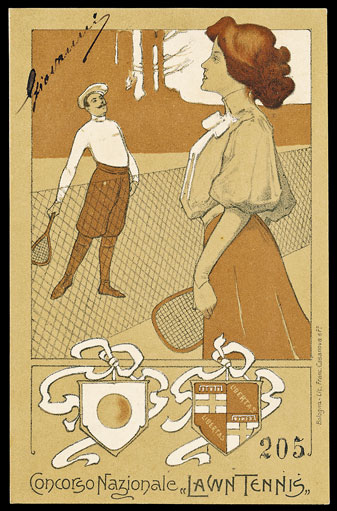 Italy was responsible for some wonderful poster adverts in the Golden Age of postcards. This card, though muted in colour, has attractive styling and advertises a tennis tournament in Bologna in 1902. 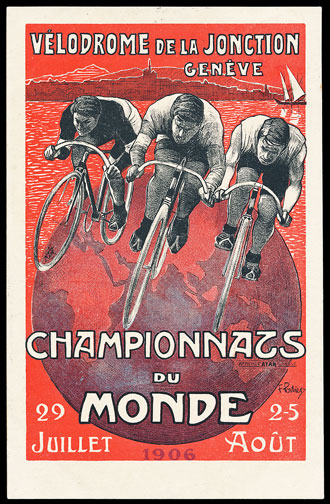 1906 is represented in the collection by a large number of cards, but perhaps few as attractive as this poster advert for a world cycling championship in a velodrome in Geneva. The name of the artist is F.Portier and the card is an official one, numbered 5116 and constitutes a receipt for a raffle draw. Should the number be drawn the owner had to present the card to the authorities within 10 days of the drawer. It would seem that the owner was unsuccessful, as the postcard was used postally from Geneva on September1st 1906. 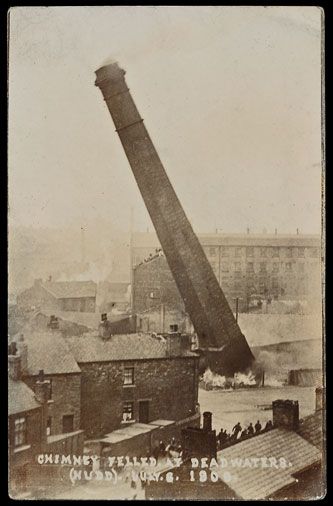 This dramatic real photo postcard depicts the felling of an unwanted chimney at Deadwaters, Huddersfield, on 6th July 1909. The photographer/publisher is anonymous. 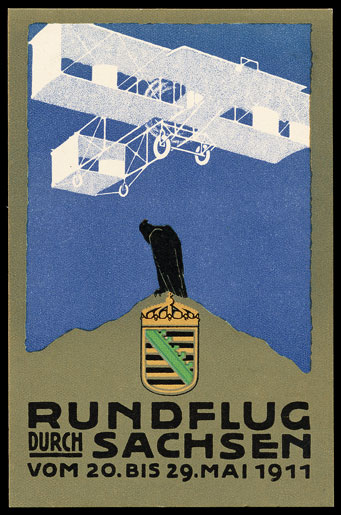 The Golden Age of postcards corresponded with the development of aviation and this wonderful poster advert commemorates the circular race around Saxony, Germany, which took place from May 20th to May 29th in 1911. The illustration is of a pioneer biplane flying over an eagle perched on the top of a mountain. Unfortunately the artist is anonymous. 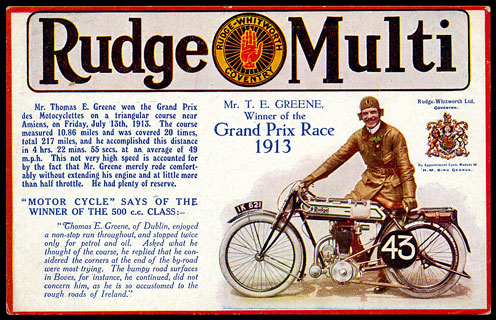 This advert for Rudge motorcycles celebrates the win of Thomas Greene of Dublin in the 1913 Grand Prix Race at Amiens, France, which he won at an average speed of 49 mph. It states “This not very high speed is accounted for by the fact that Mr Greene merely rode comfortably without extending his engine and at little more than half throttle. He had plenty of reserve.” 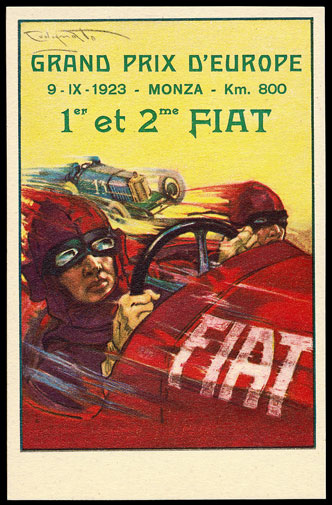 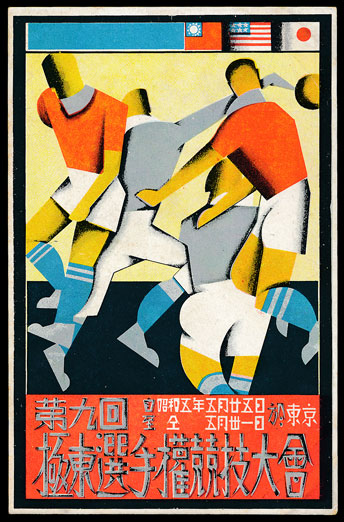 The 9th Far Eastern Championship Games were held in Tokyo from May 24th to 31st 1930 and this Japanese card commemorates the soccer games. The countries competing in the games were Japan, the Philippines, and the Republic of China and the disciplines were track and field, baseball, tennis, football, volleyball, basketball, and swimming. 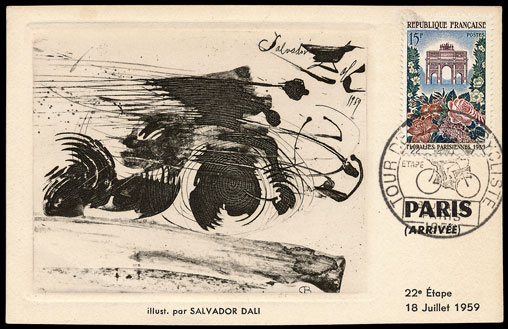 This 1959 French card commemorates the 22nd (final) stage of that year’s Tour de France cycle race. What makes this card particularly valuable is the fact that is carries a surrealist image of a cyclist at speed, drawn by Salvador Dali. It formed part of a set of 23 official cards, each representing a stage in the tour and each bearing a stamp cancelled by a special handstamp for that particular day’s stage. 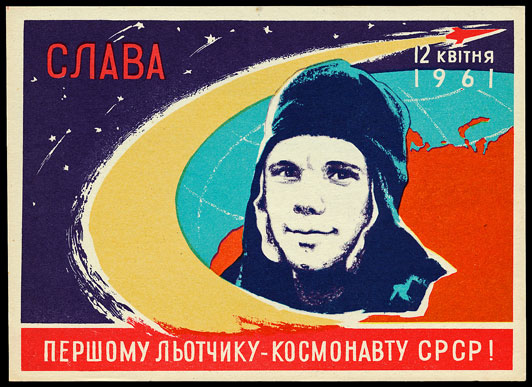 The Karl Jaeger collection does not stop at the end of the Golden Age and includes many desirable Soviet Unioncards from the 1960s. This one from Ukraine celebrates Yuri Gagarin, the first man in space, in 1961.