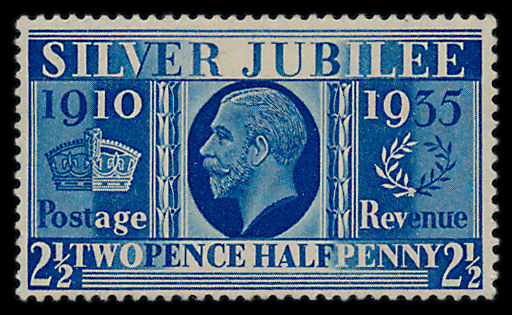 The story behind the discovery of the Silver Jubilee Prussian Blue shade is well known. A collector, Mr. A.J. Stavridi, sent his secretary to buy Silver Jubilee stamps from a post office in Upper Edmonton, northLondon. On her return he noticed that the 2½d stamps were in a different shade from others he had previously purchased and went in person to the post office to investigate. The post office had been supplied with 3 sheets of 120 stamps, in this strange shade. The sheets had been split up to fit the counter book. Of the 360 stamps, 41 had been sold and the collector bought the balance, immediately sending a few on envelopes to fellow collectors. Of the 41 sold copies, 10 were used on magazines sent to Australia, of which 1 survived, 2 were sent to a collector in Tonbridge and 1 was used on an envelope toHollandand was discovered in 1937.

For many years it was thought that the Prussian shade was the result of colour trial sheets mistakenly being perforated and issued as normal with the regular issue, but this was disproved when the Prussian Blue was measured and it was found to be the same size as the issued stamps. The colour trials were fractionally smaller. From correspondence between the Post Office Stores Department and the Controller of Stamps at Somerset House, in November 1935, it is clear that Harrisons printed a large quantity of sheets in error, in Prussian blue and these were destroyed with the exception of 6 sheets sent to Post Office Stores for inspection. The Superintendent Warehouseman was asked to destroy the 6 sheets after a block of 4 was retained for reference. However, a further mistake was made and only 2 were destroyed, 3 sheets being sent to Edmonton and one to a post office elsewhere.

There is one puzzling aspect to the issue and that is that all 3 panes delivered to the Edmonton post office appear not to have been guillotined between the 2 panes of 120 stamps printed side by side. The postmaster had to separate 2 of the panes down the first row of vertical perforations of the right hand pane, resulting in the left pane bearing control and cylinder numbers in both the left and right margins. This lack of guillotining seems only to have affected the Prussian blues. Why was this the case? My explanation is that the 6 panes of Prussians sent to the Post Office Stores by Harrisons were left un-guillotined because they realised that they were not intended for circulation. The overworked warehouseman failed to register not only the colour difference but also the fact that the sheets had to be separated manually. Perhaps we owe a debt of gratitude to the busy warehouseman, as he has provided us with what has become the most iconic error of colour in G.B. philately.